By Tyler Orton | November 22, 2019, 11:04am
Jeff Booth, the co-founder of BuildDirect.com Technologies Inc., explores the deflationary nature of technology is his new book | Photo: Chung Chow

Just the title of Jeff Booth’s upcoming book, The Price of Tomorrow: Why Deflation is the Key to an Abundant Future, may elicit more than a few raised eyebrows from those accustomed to the way the global economy functions.

For as long as Canadians can recall, the economy has pushed forward on a path of prices going up while the purchasing power of money goes down — a predictable result of inflation, not deflation.

But the co-founder of Vancouver e-commerce company BuildDirect.com Technologies Inc. is convinced that one just needs to look at the speed at which technology is advancing to understand a system based on inflation is untenable.

“Capitalism would work perfectly if we let deflation happen,” Booth said Wednesday evening (November 20) during a fireside chat at the Vancouver Lawn Tennis & Badminton Club to promote the book.

“It makes your brain do a leapfrog and I realize it.”

The Price of Tomorrow posits that because technology is deflationary — that is to say, we get far greater benefits from it as it advances even while the price of technology continues to fall — it’s on a collision course with the current global economic system, which is inflationary.

In his book, Booth points to what his first cell phone was able to do (30 minutes of talk time before a 12-hour recharge was required) at a cost of $2,000 in 1988 compared with what app-filled smartphones can accomplish at a much lower price in today’s dollars.

“The problem is that we still think that deflation is restricted to parts of our economy — that we will keep getting more with less in our electronic devices while getting the benefits of inflation in the rest of our lives,” he writes. 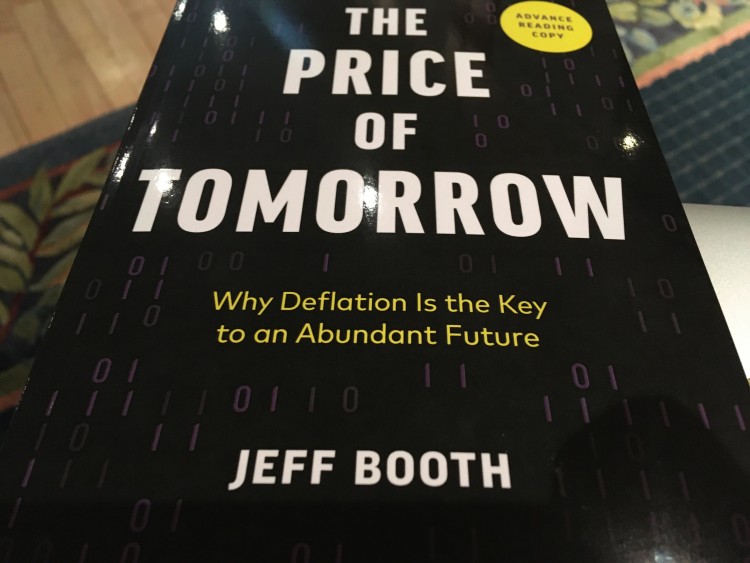 If these factors were not in play, then deflation would naturally occur as technological advances speed up exponentially and offer increasingly greater services at increasingly lower costs.

Rapid advances in artificial intelligence, for instance, have been creating considerable anxiety over job displacement as it becomes increasingly cheaper to replace humans through automation.

“And if global jobs don’t increase — and not just global jobs but global high-paying jobs — then the system we grew up with, the system we counted on all of our lives, can’t continue,” Booth said during the fireside chat.

“The cost of inaction is revolution and wars.”

He pointed to the global rise of populism as a byproduct of the current system becoming increasingly unequal.

“The problem is we don’t have capitalism today — we have crony capitalism,” Booth said, referring to the outcome of the 2008 financial crisis in which banks were bailed out instead of being allowed to fail.

The Price of Tomorrow is scheduled for release January 14, 2020.