A tentative market pushed the dollar volume of Metro Vancouver land sales in 2019’s first half down a whopping 70 per cent year over year, according to the Vancouver Flash Report from Altus Group, published November 15.

The report also noted that land sales throughout 2018 were 16 per cent lower than the full year sales of 2017.

It was a very different story in the region’s industrial sector, which continues to be a scorching market. Altus reported that nearly 3.3 million square feet of new industrial space came on stream in the four quarters ending Q2 2019 — far above the annual average of about 1.8 million square feet, but still not enough to meet demand. The industrial vacancy rate fell to a super-tight 1.2 per cent in mid 2019. 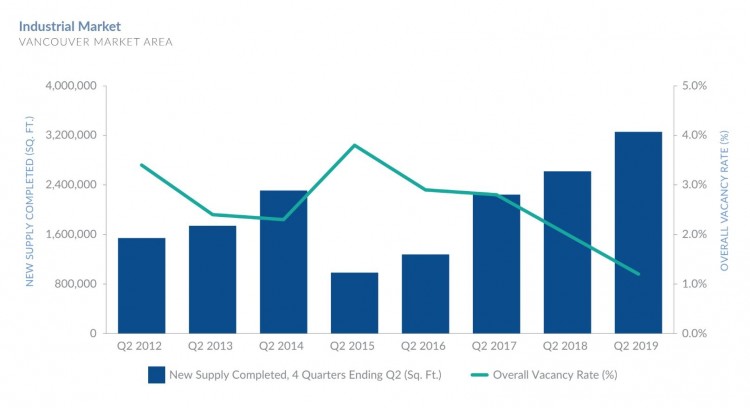 Some easing of this vacancy rate may be on the horizon, with 4.1 million square feet of industrial space currently under construction, which is about 18 months’ worth of supply based on recent market conditions, said Altus.

However, the report added, “Vancouver industrial tenants typically face higher net rental rates for industrial space than other Canadian markets, and with very low vacancy rates, it can be expected that upward pressure on rents will continue.”

The office sector also remains extremely tight in terms of vacancies, with supply in the four quarters ending in Q2 2019 also failing to meet demand. During that period only 500,000 square feet of space added to the Metro Vancouver market, which was one-third the amount of three years ago, Altus reported. It added, “The office vacancy rate is at its lowest level since 2008 at 4.4 per cent.”

Altus observed that the demand has “spurred renewed interest in developing office space. At mid year 2019, there was about six million square feet of office space under construction in the Vancouver Market Area, of which just over half is already leased.”

The report also noted that three-quarters of this under-construction space is in downtown Vancouver. Downtown Vancouver has “not seen any completed space added in over a year, which helped drive the [downtown office] vacancy rate below three per cent in mid 2019.”