Slot machines are the primary revenue generators at most of B.C.’s gambling houses

Revenue at B.C.’s largest casinos fell an average of 0.1% in 2018 from 2017 compared with the 4.4% one-year growth experienced five years ago, according to data on Business in Vancouver’s Biggest Casinos and Bingo Halls in B.C. list (page 13). 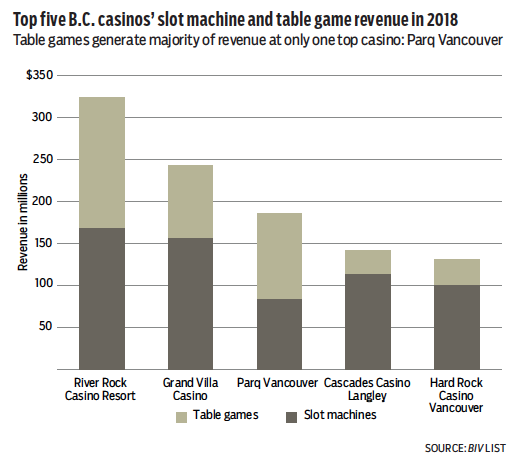 River Rock earns 52% of its revenue from slots and the rest from table games. In 2018, its table games generated an average of $1.7 million per table, more than any other casino in the top five.

Parq Vancouver had the highest-earning slot machines among the top 20 casinos: an average of $145,741 per machine compared with River Rock’s $134,245. 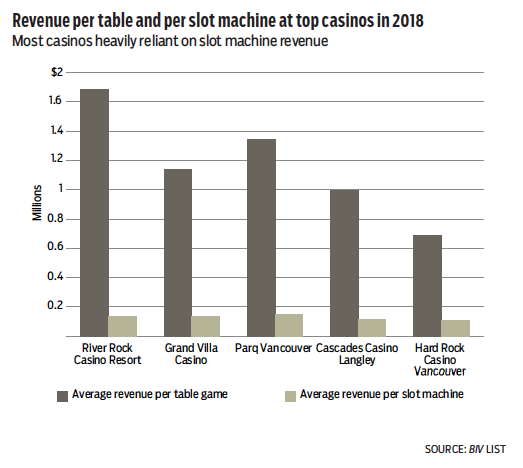 Hard Rock Casino Vancouver and Cascades Casino Langley are both heavily reliant on slot machine revenue. It makes up 77% and 80% of their revenue, respectively.

Despite being more reliant on slot machine revenue, their machines generated less revenue on average than other casinos in the top five. In 2018, the average slot machine at Hard Rock generated $109,930 while Cascades Casino generated an average of  $113,269 per slot machine. •