Surrey aims to share in any transit land lift values

By Frank O'Brien, Western Investor | November 14, 2019, 11:07am
The price of land along the Surrey SkyTrain extension corridors is rising as speculators bid up prices | Submitted

A concept to ensure affordable housing along the new SkyTrain rapid transit extension in suburban Surrey has run into a major hurdle: spiralling residential land prices along the route.

The City of Surrey won’t have zoning and other planning complete for the 16.5-kilometre transit line until January 2020 and phase-one construction is not expected to start until 2021, but land speculators are already active along the transit corridor. The first phase of the SkyTrain will run from the existing King George Station in central Surrey to 168 Street, with the second phase continuing to Langley once funding is approved.

An example of the land rush is a  bungalow on a quarter-acre lot close to the first transit station planned: it sold in September for $1.6 million. This price is twice the property’s assessed value of $839,300, and about $600,000 higher than the benchmark price of a Surrey detached house, as reported by the Fraser Valley Real Estate Board.

“A speculator-developer bought it,” confirmed real estate agent Joe Varing, head of Varing Marketing Group with HomeLife Glenayre Realty, who handled the transactions. The site, part of a planned land assembly, is now zoned for a floor-space ratio of 2.5, but the buyer is confident that zoning will be for high-density condominiums once the city’s transit corridor planning document is released, Virani said. 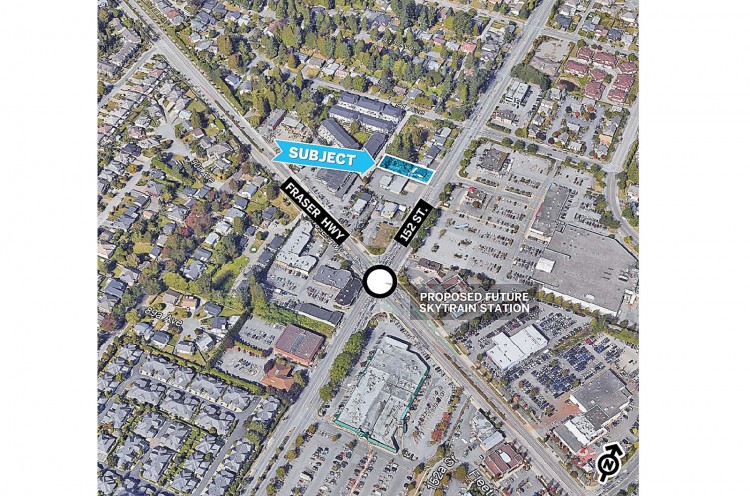 Patrick Klassen, Surrey’s manager of community planning, however, warned developers that the city will be seeking a 50 per cent to 75 per cent share of any lift in land value related to transit corridor zoning. The final fees will not be decided until early next year, he said, after the land use plan is released.

The first public open house on the SkyTrain extension planning will be held mid-November at the Surrey Sports and Leisure Centre.

The only renderings outlining city plans for the area reveal a cluster of four-to 10-storey buildings with a mixture of retail and residential around the 152 Street station.

Land along the proposed route is about the only residential property in Metro Vancouver that is selling far above assessed value. So far this year benchmark housing prices are down about 9 per cent from a year earlier, and most houses are selling for less than BC Assessment values set in July 2019, according to real estate sources.

Affordable housing is a goal, according to a City of Surrey statement released following approval of federal and provincial funding for the first phase of the transit extension, expected to cost $1.6 billion.

“As part of the planning process [city] staff will integrate affordable housing strategy policies into measures that help preserve existing affordable housing, and particularly non-market rental housing within the plan areas in the corridor. As well, staff will develop location specific policies to provide incentives to encourage the development of affordable rental housing within the corridor,” the April 2018 city document reads.

If eventual city zoning does deter high-density market residential units along the SkyTrain corridor and takes a lion’s share of land lift values, it would not be the first disappointment for Surrey land speculators.

Last year investors paid up to $4 million per acre for land along Surrey’s planned light-rapid transit line to Newton. That transit plan was scrapped, however, following the October 2018 civic election.

“I guess that is what can happen when we speculate,” Klassen said.