By Grant Lawrence, Vancouver Is Awesome | November 19, 2019
Aaron Chapman’s latest book, Vancouver After Dark: the Wild History of a City’s Nightlife pours out the sagas of dozens of nightclubs, bars and dance halls through the ages | Photo: Mike Derakhshan

When you sink into the stories vividly portrayed in the new book Vancouver After Dark: the Wild History of a City’s Nightlife, it’s hard to imagine this town ever took on the moniker of “No Fun City.”

Author and V.I.A. and Vancouver Courier contributor Aaron Chapman has previously written about Vancouver nightlife in his award-winning book Live At the Commodore and his bestselling debut Liquor, Lust, and the Law (about the Penthouse).

This time he has vastly expanded his scope, pouring out the sagas of dozens of nightclubs, bars and dance halls through the ages, every place from the Cave to the Starfish Room, Oil Can Harry’s to the Smilin’ Buddha. 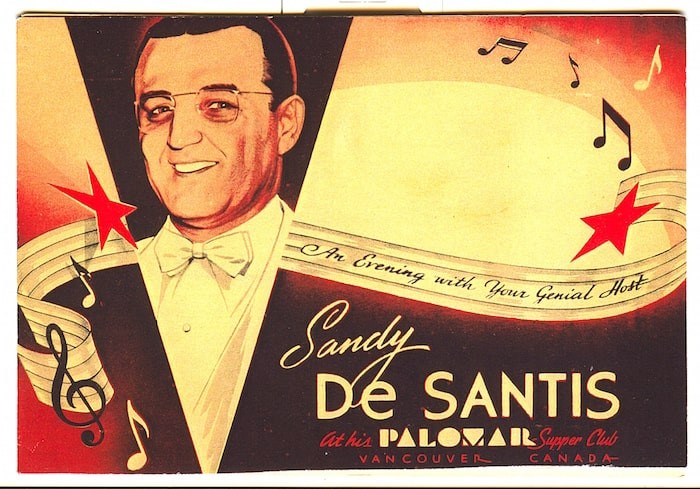 A poster from the Palomar Supper Club. Image courtesy of Tom Carter archives

It’s a book you can enjoy reading from page one onward, or opening at any section and reading about, say, the outrageous history of Gary Taylor’s Rock Room, or the blurry goings on at the Pig and Whistle.

Throughout the book are rare and sometimes never-before-seen photos, as well as an incredible array of posters.

Chapman — also a musician who performed at several of Vancouver’s most famous venues — has clearly emerged as this city’s foremost historian of the entertainment circuit. In advance of the book’s launch party on Thursday, Nov. 28, I caught up with the ever-affable author.

Grant Lawrence: What was the thought process in deciding to write about such a vast variety of clubs over such a long period of time?

Aaron Chapman: I think it’s an interesting time here in the city to look back and see what we’ve lost. These places were important not just because great talent, or world-renowned performers played in them — it’s where we as Vancouverites went to meet and interact with one another. No city is a museum that remains preserved. But when these places disappear, it changes the DNA.

How did you choose which clubs to write about?

I wanted to focus on the places that weren’t just an everyday bar, but nightclubs that had live music and entertainment. Or clubs that were kind of pivotal places, where something interesting happened, that reflected what Vancouver was like at the time. Every generation has their own favourite places. Vancouverites of a certain age might still fondly recall nights at the Cave, while their grandkids might miss the Luv-A-Fair, or Graceland. People still talk about these old clubs fondly. They had value and meant something. 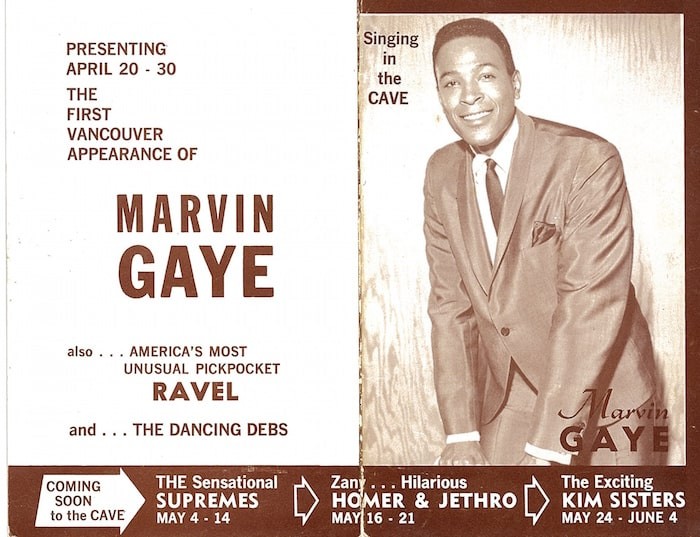 A poster from Marvin Gaye’s performances at the Cave. Photo courtesy of Neptoon Records archives

While I thoroughly loved reading about the history of places like the Retinal Circus, the Town Pump, Isy’s, and so many others, I was surprised to read that you didn’t include the Savoy or the Railway, both owned by the same family. Why was that? Did they ban your former band the Real McKenzies or something?

Ho ho, no, not at all. The book by no means is an encyclopedia of all the bars and watering holes in the city. There are a couple of places like the Savoy (a.k.a. the Gastown Music Hall) that could have made the cut. The book specifically spotlights places that aren’t around anymore, and the Railway is still very much there — as is the Yale. They are different now, and maybe their styles or formats have changed, but their stories aren’t over yet.

If you could transport yourself back to the heyday of any of the clubs you write about in Vancouver After Dark, which one would you most want to hang out at?

That’s a tough question. There’d be so many to choose from. How great would it be to step back in time and catch Richard Pryor doing a set at the Marco Polo in Chinatown. Or to grab a cab and head over to the Cave to see Anthony Newley with a 20-piece band. Or to have been a fly on the wall at some of the first saloons in Vancouver, just to hear the conversations of people around the bar. How great would it have been to be one of a dozen people in the audience to see what would become the biggest comedy duo of the 1970s — Cheech and Chong — do their first show together at a dive on Main Street. In a way, I hope with the book people can take that time machine and come back without a hangover.

What do you think of the present and future nightlife in Vancouver, specifically with regards to live music? Is it over?

Not at all. One thing I try to stress in the book is that Vancouver has never been “No Fun City.” There’s stuff happening every night of the week. Lots of times there are two or three good shows to be at on any given night. I think Vancouver sometimes needs somebody to tell people, “Hey, the party isn’t over there — it’s down here.” Sometimes you just need a guide or somebody to let you know where things are happening. Sometimes the places to be weren’t always at the popular clubs of the period. In a way, it’s never been as easy, and it’s never been as hard. But there are still some fascinating and talented people on stage and off making places happen right now.

The book launch party for Vancouver After Dark is Thursday, Nov. 28 at Central Studios, (formerly Hollywood North, formerly Playpen Central, formerly the Thunderbird Club) at 856 Seymour St. The event is free and will be hosted by Les Goodman from the Jazzmanian Devils, and will feature author Aaron Chapman and various special guests. Doors open at 7 p.m., and the event starts at 8 p.m. Vancouver After Dark: The Wild History of a City’s Nightlife is available from Arsenal Pulp Press.