By Glen Korstrom | November 27, 2019, 9:04pm
Plastic bags given away at retail checkouts will not be able to be given out starting in 2021 | Glen Korstrom

Vancouverites will have to start adjusting to living without getting plastic bags at the checkout of retail stores, or with take-out food.

Vancouver city council on November 27 voted to accept a staff recommendation to ban businesses from providing those bags as of January 1, 2021. Plastic produce bags at grocery stores will continue to be allowed.

Many businesses will likely phase in the change ahead of time. Those who do not and have excess bags are able to donate them to charities, which are exempt from the bylaw and will still be able to use them.

Businesses will be able to provide paper bags at check-outs at a cost of $0.15 each, for up to a year. After that, they will have to charge a $0.25-per-bag fee that they will be able to keep as revenue to finance the cost of providing higher-priced paper bags.

Those fees will be onerous on coffee shops and other restaurants that sell low-priced items, Restaurants Canada's vice-president for Western Canada, Mark von Schellwitz, told council earlier in the day.

"A $0.25 fee on a $1.25 beverage represents 20% of the cost of the beverage purchased, which certainly could have a negative impact on sales," he said.

Businesses will also be required by April 22 to only provide single-use utensils (made of any material) when specifically requested. That new regulation includes bendable plastic straws, which many people who have disabilities require.

City manager Sadhu Johnson stressed that currently there is no requirement for businesses to have bendable plastic straws for customers with disabilities so the new regulations actually provide more security for those people that they will be able to get those straws.

Bubble-tea stores, which require wider plastic straws for drinks, will be exempted from the new bylaw and may continue to provide wide straight plastic straws.

Council also voted to require businesses to charge a $0.25 fee for each disposable cup provided to a customer, as of January 1, 2021.

These moves are in addition to the previously voted on measure to ban polystyrene cups and containers by January 1, 2020. 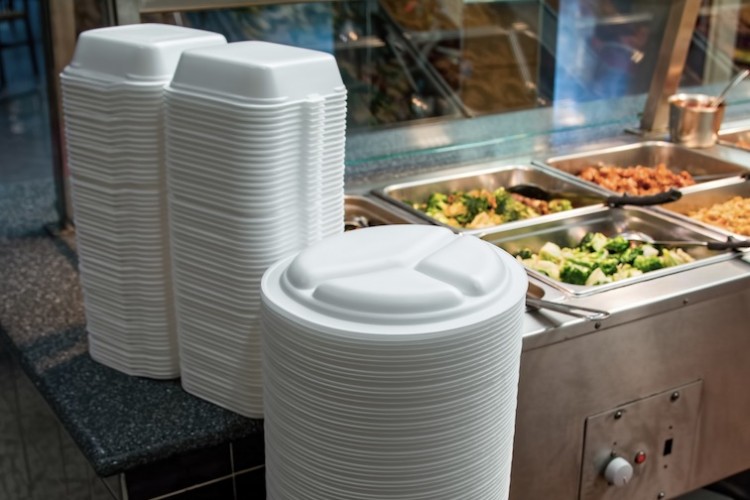 Retail Council of Canada's director of government relations Greg Wilson told council earlier in the day that he felt that council "ignored" his organization's input.

He supports a provincial or a federal ban on plastic bags, but not a municipal ban in Vancouver because it will not be harmonized with other jurisdictions, he said.

"For more than two years, Retail Council of Canada engaged with the City of Vancouver in consultations about the reduction of single-use items," he said.

"We asked that actions be harmonized with those taken by other jurisdictions. We made a requirement for what business most often craves: regulation with the lowest cost, or operational impact. At the end, our feeling is that our words were ignored. The bylaw amendments before you today are not at all harmonized with other jurisdictions across the country – not even the City of Richmond across the Fraser River."

Councillor Sarah Kirby-Yung told Business in Vancouver after the council meeting that staff assured her that there are some jurisdictions that require fees for paper bags so she believes that Vancouver is not entirely going in on this strategy alone.

It is not immediately clear what municipalities have such a bylaw. Victoria tried to enact such a bylaw but it was struck down by the BC Court of Appeal because it was deemed that the city needed provincial approval. The City of Vancouver operates under a different charter and staff believe that legislation provides it the ability to act.

As for Wilson, however, he added that the city's new bylaw involves requirements that are "unprecedented anywhere else," namely that businesses will have to report their annual sales to the city.

"You would also have to add a line to any cash register receipt you provide a customer," he said. "You could not include it with other bag fees or other fees. You would have to create a separate line. Those are significantly more expensive for small businesses than for big businesses."

Kirby-Yung said she believes that voting for the package of new changes overall is a good thing.

"We made a very solid commitment in terms of zero waste, and I think that waste management is a core city service, and that has been evolving as we try to move away from a disposable society," she said.

"In having a holistic strategy that includes everything from plastic bags to cups, it is meant to create an entire culture around trying to simply reduce the amount of waste that we are putting out as residents."

She said she recognizes that small businesses operate with slim margins, and that the ability to charge fees on take-out cups could help them out because they get to keep that revenue.

"Maybe this will help us slow down a bit in Vancouver, to sit down and actually have a cup of coffee in instead of rushing around, which we do now," she said. "We have very busy lives. So there could be a social benefit."