The cold reality of effective policies to combat climate change

Sustainable energy experts urge focus on what is achievable

That required reducing emissions from 730 megatonnes of carbon dioxide equivalent (CO2e) to 607 megatonnes by 2020.

Canada produced 716 megatonnes of CO2e in 2017 and is on track to miss the target by more than 100 megatonnes, which is probably why you never hear Canadian politicians talking about the Copenhagen Accord anymore. They now talk about the Paris Agreement.

The Stephen Harper government set targets under the Copenhagen Accord but implemented no real policies for achieving them.

The Justin Trudeau government’s plan is backed by policies and regulations that sustainable energy experts say could be effective, although a recent United Nations report on the emissions gap suggests the current plan will get Canada only halfway to its target, unless it takes additional steps.

But there now appears to be public support in Canada to get serious about tackling climate change, so it’s possible there will be public support for additional measures or increased stringency to existing measures.

An analysis by the Deep Decarbonization Pathways Project concludes the Trudeau government’s climate action plan, combined with provincial policies, may be achievable without significant damage to the economy.

“We concluded that joint effort across Canadian jurisdictions has improved the country’s odds of meeting its 2030 GHG target and decarbonizing its economy by 2050,” it says.

“That is the first federal government we’ve had that has done any of the climate sincere actions,” Simon Fraser University sustainable energy economist Mark Jaccard said at a recent lecture, where he previewed his new book, The Citizen’s Guide to Climate Success, which will be out next year.

“We have the necessary technologies, and we know that the costs are modest, to decarbonize electricity here and everywhere in the world,” Jaccard said.

The key is to make the demand for fossil fuels fall, he said, and he suggested that protesting pipelines won’t accomplish that.

Zero-emission vehicle mandates and clean-fuel standards like the one in place in B.C. – and which the federal government is also pursuing – are examples of what Jaccard calls effective “flex regulations” that will lower the demand for fossil fuels.

While carbon taxes get a lot of attention, one of the most powerful policies the Trudeau government has adopted is its plan to phase out coal power by 2030. Ontario did it, and achieved significant reductions, though it came with increased electricity prices.

Coal provides just 10% of Canada’s power but produces 75% of the emissions from power generation – about 60 megatonnes of CO2e. Phasing it out could take a big bite out of Canada’s emissions, even if natural gas makes up some of the replacement power.

“That policy is going to have an enormous effect,” Jaccard said.

Jaccard’s new book tackles a number of myths – some of them held by people with good intentions – that may hamper the energy transition. One is the myth that wind and solar power have become so cheap that they can compete with fossil fuels.

“It’s not true,” Jaccard said. “It wasn’t true 20 years ago, and it’s not true now. Fossil fuels are amazing, and their costs keep falling.”

The problem with renewables is their intermittency, low energy densities and lack of long-term storage. The danger with the myth that renewables can compete with coal or natural gas is that policymakers may sit back and assume economics alone will ensure their adoption, when regulations and subsidies are still needed.

Even if countries like Canada can accelerate some of their policies, there is some question whether they can hit some of their interim targets, like a 30% reduction in emissions by 2030.

Last week, the United Nations issued a report on the emissions gap that predicts Canada will realize only about half the reductions it aims for by 2030. Canada is one of seven G20 countries the UN has identified that require “further action” if they are to meet their 2030 targets.

But if Canada is going to have a tough time reaching a 30% reduction target in 10 years, what are the odds that B.C. can meet an even tougher target of 40%?

B.C.’s CleanBC targets are so ambitious that there is serious doubt that it can reach them in such a short time, especially if B.C.’s population and economy continue to growth at the pace they have over the last 10 years.

One need only look at the data to see that it’s not just fossil fuel use that has been driving emissions up, but population and economic growth as well. The task is to decouple emissions from economic growth, which is starting to happen. 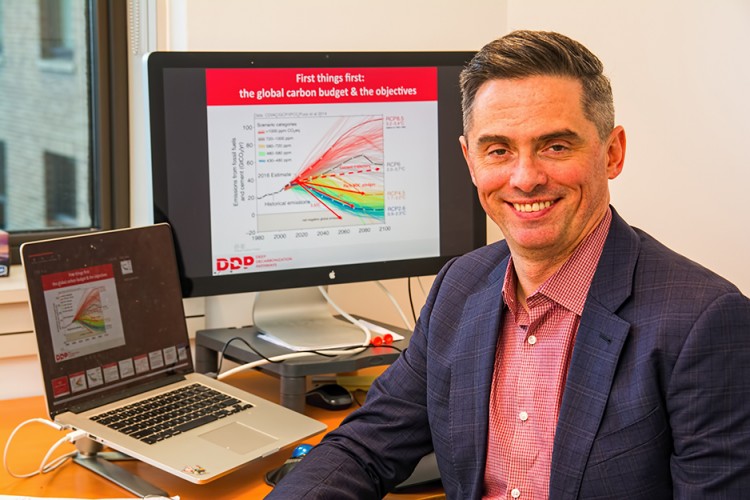 Energy economist Chris Bataille: achieving a 40% reduction in emissions may be possible through conversion to electricity or net-zero natural gas | Rob Kruyt

“Our GDP per unit of greenhouse gases emitted is falling quite rapidly,” said Chris Bataille, an energy economist with Simon Fraser University and researcher for the Deep Decarbonization Pathways Project.

Asked if B.C.’s target of 40% by 2030 is realistic, Bataille said it depends on what is done with buildings, most of which use natural gas for heating.

“The transport sector, I think we can do some stuff there that’s largely achievable,” he said. “If we can sort out, a) a retrofit program to get buildings on electricity, or b), source a whole lot of renewable natural gas – basically net zero natural gas from biogas or what-have-you – it might be achievable.

“What I would suggest is that, basically, very rapidly, by say 2025, so the building industry’s got some time to adjust, is you don’t build … a new gas furnace into a new building.”

Even if Canada eventually makes a real dent in its emissions, they could be offset by increases elsewhere by countries that are not meeting their own climate change policy commitments.

Jaccard is among the academics who now think that countries that have made serious commitments to tackle climate change should form a “carbon club” of nations that would begin implementing carbon tariffs against countries that don’t.

“Any agreement has to have penalties for people who are not following the rules,” Jaccard said. “If this minority government, federally, lasts for a while, that’s what I’ll be screaming in their ear.”