Could a downshift in auto sales signal a recession?

Car sales in British Columbia have dropped 3.2% since June 2018

Slumping auto sales across the country could signal economic troubles down the road.

Retail sales generally and automobile sales more specifically tend to be a leading indicator of a recession. Consumer spending drives a significant proportion of gross domestic product, and because automobiles tend to be the most expensive consumer good, car sales can tell us a lot about the state of the economy.

Automobile sales in Canada began to flatline in early 2007, more than a year and a half before the most pivotal event of the 2008 financial crisis, the bankruptcy of U.S. investment bank Lehman Brothers. 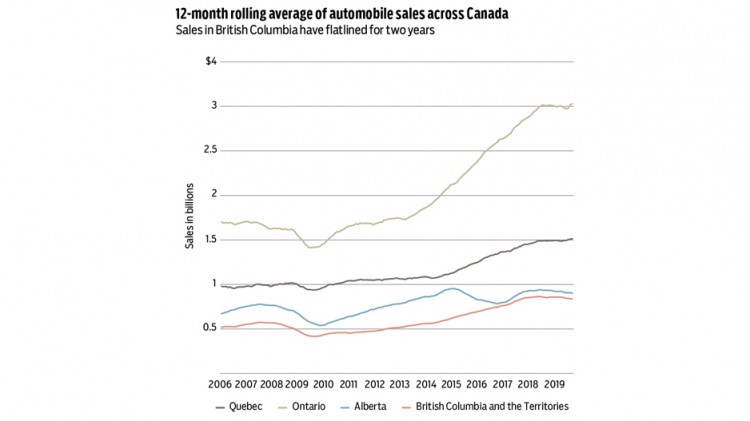 More recently, Alberta suffered a decline in vehicle sales during the 2015 oil crash. The province’s auto sales have yet to return to their February 2015 peak of $952 million.

Possibly more worrisome is that car sales have started to decline again, falling to $900 million in September 2019 after reaching $940 million in June 2018.

Across the country, regions are experiencing flat or falling auto sales in 2019 after a long stretch of sales growth. British Columbia had posted 53 straight months of automobile sales increases, from January 2014 to June 2018. 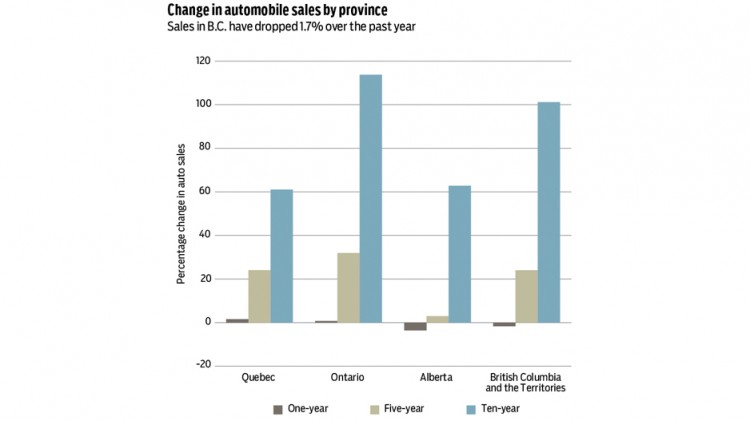 Ontario and Quebec, which make up 64.1% of Canadian automobile sales, have not been struck by a decline in sales but are reporting that they have flatlined.

On the other hand, the U.S. has been experiencing falling auto sales for a longer period, and that has yet to lead to a broader economic slowdown, according to Avery Shenfeld, managing director and chief economist of CIBC Capital Markets.

“Auto sales are a cyclical indicator, so stronger is better than weaker, but no one variable should be taken as the decisive indicator for when the economy is growing or in recession,” said Shenfeld. “It is a sign that growth has slowed a bit, but it’s not a reliable recession indicator on its own.” •