Harbour Air CEO and founder Greg McDougall piloted the e-plane himself for the inaugural flight out of the floatplane harbour at Sea Island on the Middle Arm of the Fraser River December 10. The test flight lasted about 15 minutes.

“Today, we made history,” McDougall said in a press release. “I am incredibly proud of Harbour Air’s leadership role in re-defining safety and innovation in the aviation and seaplane industry. Canada has long held an iconic role in the history of aviation, and to be part of this incredible world-first milestone is something we can all be really proud of.”

The plan is to convert Harbour Air's entire fleet of 47 seaplnes to electric motors. McDougall said it will take two or three years before Harbour Air can begin flying passengers.

“We have to get through a rather complicated regulatory process to be able to carry passengers," McDougall told Business in Vancouver. "It hasn’t been done before, so anything that’s new always takes time. And we have to prove to the regulators that we have as much safety or better than what we currently have, which I don’t think is going to be a problem.

“Ultimately, the goal is to convert the entire fleet, but realistically we’ll convert them as the technology allows us to." 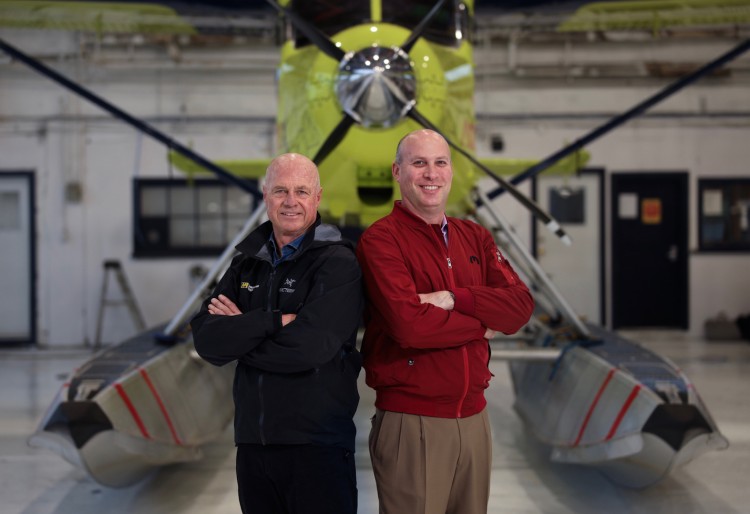 Harbour Air has been working with magniX in Washington to outfit one of its harbour-to-harbour seaplanes with an electric motor. A six-passenger DHC-2 de Havilland Beaver was outfitted with a 750-horsepower (560 kilowatt) magni500 electric motor made by magniX.

The flight marks an important milestone. Aviation, which produces about 2% of the world's carbon emissions, presents a particular problem when it comes to decarbonization of transportation, since there are issues with the energy densities of batteries to provide the kind of power needed to get an airplane – especially one with passengers and cargo -- into the air and keep it there.

“Batteries capacious enough for intercontinental flights carrying hundreds of people are still the stuff of science fiction, and we will not see wide-bodied planes fueled by liquid hydrogen anytime soon,” the noted energy scientist Vaclav Smil wrote in 2016.

But electric motors may be perfectly suited for smaller planes and shorter trips, just as battery electric motors are suitable for passenger ferries, but not container ships.

Harbour Air's seaplanes typically make short trips, between Vancouver and Victoria, Seattle, Nanaimo, the Gulf Islands, Whistler, Tofino and Sechelt. The magniX system gives an airplane about 100 kilometres of flight. A typical Harbour Air flight is about 60 to 70 kilometres.

“The transportation industry and specifically the aviation segment that has been, for the most part, stagnant since the late 1930s, is ripe for a massive disruption," Roei Ganzarski, CEO of magniX, said in a press release. "Now we are proving that low-cost, environmentally friendly, commercial electric air travel can be a reality in the very near future.”

Harbour Air already offsets its emissions through carbon offsets, but converting to all-electric propulsion would be equivalent to taking 25,000 cars off the road, McDougall said.

As for return on investment, McDougall said the cost of converting to electric motors is easily offset by the savings in fuel and maintenance.

There would be savings on fuel costs, of course, carbon taxes, and the carbon offsets that Harbour Air buys. But the real savings would be in maintenance. With electric motors, there’s next to no maintenance required, whereas with turboprop engines have significant maintenance and rebuild requirements.

“You have a motor with a notional life of 10,000 hours – and that’s probably being pessimistic – because it’s so simple,” McDougall said. “We’re looking at, in rough numbers, the same 10,000 hours in a conventional turbine will cost a couple million bucks in maintenance, rebuilds and all the rest of it, whereas 10,000 hours in an electric motor should cost us virtually nothing.”

It’s not much different from an electric car, in that respect.

“I’ve owned a Tesla for five years, I’ve never had one mechanical thing fixed – not one," McDougall said.

Converting to all-electric would have the added benefit of reducing both noise and fumes in harbours, many of which are close to residential areas. While there is propeller noise, electric planes are quieter than turboprop engines.

“That’s a big driver for us, to be able to reduce the impact that we have on our neighbours,” McDougall said.