It's not only one of the world's biggest Polar Bear Swims, it's also one of the oldest, and on January 1, 2020 the event marks a century of chilly New Year's Day fun in Vancouver.

The tradition finds brave souls hitting the bracing cold waters of English Bay to ring in the new year in Vancouver.

For 2020 and the centennial celebration, The Vancouver Park Board says they'll be hosting "the largest event ever."

New this year will be family and wheelchair-accessible zones, so that all ages and all bodies can take part in the merriment.

The event will run from noon to 4 p.m. and will feature live musical entertainment, roving performers, and food trucks on site. At 2:30 p.m., swimmers will take the plunge.

Pre-registration is encouraged, and is the only way you can get yourself a commemorative certificate proving you actually did it. Sign up online here.

What's the deal with Vancouver's Polar Bear Swim? Well, we have a man named Peter (Pete) Pantages to thank for the tradition. Pantages was a Greek immigrant with showbiz in his family tree, a popular restaurant of his own, and the charm to have talked some buddies into plunging into the frigid Vancouver waters on January 1, 1920, essentially inaugurating the Polar Bear Swim. 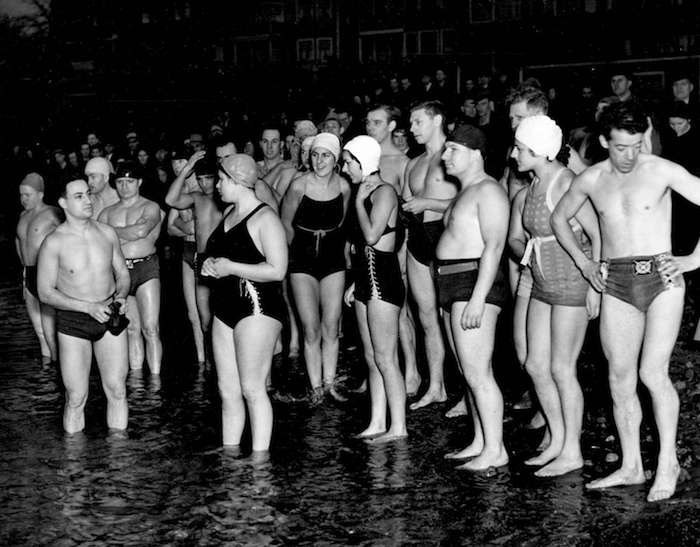 The Polar Bear Swimmers get ready to go in, January 1, 1939. Vancouver Archives

Various members of the Pantages family, including Pete's children and grandchildren, have continued to participate in the annual chilly plunge. On January 1, 2016, you would have seen Pantages' granddaughter Lisa participating, wearing her grandfather's wool swim suit, to boot.

On Jan. 1, 2020,  Lisa Pantages will be doing her 58th Polar Bear Swim, along with at least three generations of her family.

You can read more about Peter Pantages and the Polar Bear Swim here.