Man in his 40s returned last week from Wuhan, China – the epicentre of the disease outbreak

By Glen Korstrom | January 28, 2020, 11:13am
The case is called "presumptive" because it has not yet been confirmed at a federal lab in Winnipeg | Shutterstock

The first case of the novel coronavirus 2019-nCoV, which is rapidly spreading across the globe and has killed at least 106 people, has shown up in British Columbia.

B.C. provincial health officer Bonnie Henry is calling the case “presumptive” at this point because it has only so far been confirmed at a B.C. lab in the evening of January 27. Samples are set to arrive today (January 28) at a federal lab in Winnipeg to conduct an independent test and confirm the case.

“Our lab here has been in contact with the Winnipeg lab, but given the history of travel, the contact that this person had in Wuhan city and the symptoms they were showing, we are confident that this is truly a case of this novel coronavirus,” she said at a press conference January 28.

She said that the man arrived at Vancouver International Airport last week but when asked would not specify a day. The man in his 40s is a resident of the Vancouver Coastal Health region. He felt no symptoms on the plane or at the airport but on January 26 started to feel ill, self-isolated himself and alerted authorities, she said.

He did not go to hospital but instead was attended to by health officials at his home, which is where he is now.

Federal confirmation that the B.C. patient has 2019-nCoV is expected to take up to two days.

Worldwide, there are more than 4,500 cases confirmed since the disease started spreading in December at a market that sold live animals and seafood in Wuhan, China. China has since quarantined tens of millions of people in Hubei province and elsewhere.

"We have good confidence in the testing that is done here," Henry said. "It is done based on a genetic test that looks for three different protein areas and then we did, not the whole genome, but a sequencing of the genome that matches exactly to what we know to be the published sequence of the novel coronavirus from China."

Henry said that "a second handful" of people are being tested from around the province for the virus and she did not want to provide an exact number because "it's going up and down." The BC Centre for Disease Control will post the number of tests that have been done at the end of each week, she said, adding that the number of people being tested "changes on an hourly basis."

While 2019-nCov is infectious, it is much less able to pass from person to person than diseases such as measles, Henry said. Chinese officials have said that the disease can be passed by an infected person who is not yet symptomatic. but she rejected that, saying that she believes that a person would have to be symptomatic to pass on the disease.

Henry also acknowledged the existence of a person who has been the subject of rumours on social media. The rumour was that the person arrived in Metro Vancouver from China, felt ill, went to a local hospital to get checked, and was turned away. That person then went back to China and was only then confirmed as carrying 2019-nCoV. 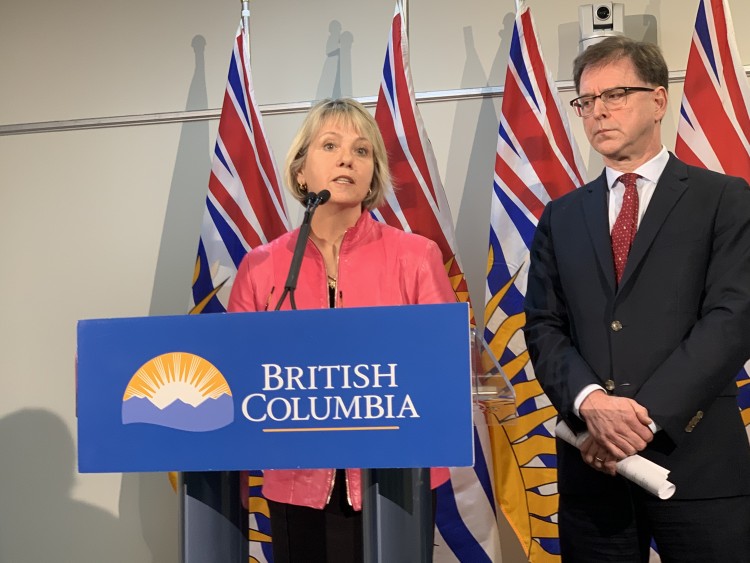 "We have reviewed that case with the clinicians who assessed the individual," Henry said, thereby confirming the existence of the individual. "It has been investigated in some detail and we can confirm that there is no risk to people here in B.C."

She then warned the public not to listen to rumours and third- or fourth-hand retellings of stories.

She was asked about another rumour – that the government is somehow involved in a plot to reduce the supply of face masks, and she outright rejected it.

With the alleged case of a sick person who was turned away from a B.C. hospital, and then left the province only to be later found in China to be carrying the virus, she did not deny the account when Business in Vancouver specifically asked her about those facts.