'West Side Plus' option priced at between $30 and $40 million

By Naoibh O'Connor, Vancouver Courier | January 21, 2020, 10:54am
A rendering of Westside Plus — the preferred option for the redesign of Granville Bridge | Submitted

City staff are recommending a design called “West Side Plus” as the preferred option for the redesign of the Granville Street Bridge. Priced at between $30 and $40 million, it largely focuses on improvements to the west side of the bridge, with some enhancements to the east side sidewalk.

The recommendation comes about four months after staff went to the public for feedback on six possible options. Among those rejected include a “raised centre” proposal tagged at between $45 and $50 million — the most expensive option. While that scheme was initially the staff favourite for its engineering simplicity and from an urban design point of view, Paul Storer, manager of transportation design, said public reaction heavily skewed in favour of West Side Plus.

“The centre one was, in ways, the good engineering option. It avoided a lot of the complexities around the ramps… but what we ended up hearing from people was that people didn’t think they would feel comfortable between the two directions of moving traffic,” he said.

People also wanted a connection to the water, to be able to look down at False Creek and Granville Island, and they preferred the view afforded from the west side of the bridge compared to the east side.

The redesign project involves re-allocating two of the existing eight vehicle lanes on the bridge to pedestrian, wheelchair, stroller and cycling use.

“West Side Plus” basically doubles the width of the west side sidewalk, makes it accessible, and features places to rest along the way. Next to it, separated by a curb, would be a two-way cycling lane with room for passing. It would be separated from traffic by a barrier.

“The idea behind the cycling connection is that it would be comfortable for everyone, for all ages, abilities. We'd expect to see families and seniors and people uncomfortable riding feeling comfortable in this facility, because it would have that strong separation from traffic,” Storer said.

The east side sidewalk would also be widened and made accessible in this option, and a protective barrier would be installed. As well, this option involves improvements to the Hemlock on-ramp.

The redesign is one of the city’s “big moves” to meet its target of having two thirds of all trips being made by walking, biking or transit by 2030.

Constructed between 1951 and 1954, Granville Bridge is a particularly wide bridge that was designed for freeways that were never built. Due to the high speed of traffic, some pedestrians and cyclists are uncomfortable using the crossings at the on and off ramps. Steps at the crossings also make it inaccessible to some, existing sidewalks are narrow and close to traffic, connections at each end are awkward and there’s no space set aside for cyclists.

But not everyone who weighed in during recent feedback sessions about the six options were in favour of a redesign. About 10 per cent wanted the bridge to be left alone. Storer said that’s not an option.

“We’re in a climate emergency. This is one of those key projects that's going to help us meet our climate emergency targets and start us moving towards a more sustainable transportation system,” he said. “It's clear that there's way too much space on this bridge devoted to motor vehicles. It's not an efficient use of that space. By building this, we can get people out of cars and walking or cycling across the bridge. And, that's going to get those people out of the way of the people who really do need to drive across.”

Open houses outlining the preferred option begin later this month. Staff with gather feedback and tweak the plan before bringing it before council later this spring. If approved, construction could start in 2021 and take about a year.

“What we would expect to take the council would be a first phase of a project that would still achieve most of the goals. That probably wouldn't be the full build-out. That would be within the $25 million allocated within the capital plan,” Storer said.

The open houses about the recommended design run Jan. 24, 25 and 28. "Deep dive" workshops run Feb. 1 and 4. More information can be found HERE. 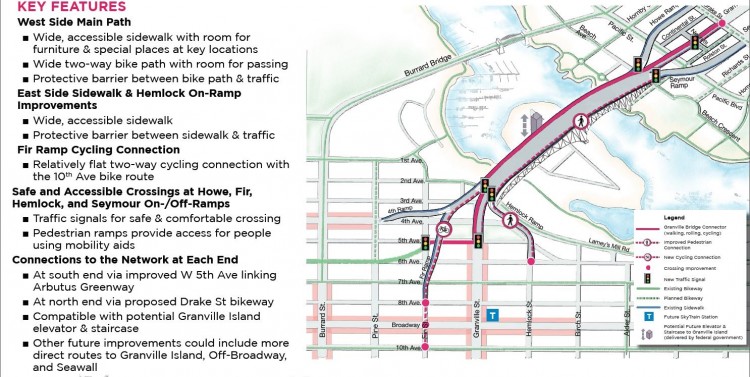 A map of some of the features in the Westside Plus option.

Based on the Westside Plus option, this is what the bridge would look like on most of the route.

In the Westside Plus option, st some locations on the bridge such as the bridge apex, the bike path narrows to create space for "special placemaking moments."