The Port of Seattle is spending US$3.7 billion over five years and intends to spend about US$6 billion within 10 years on its airport. The Vancouver Airport Authority, meanwhile, plans to open an expanded terminal this summer – one of 75 projects over the next 20 years with a combined estimated price tag of $9.1 billion.

Known for decades primarily as a domestic hub for Alaska Airlines (NYSE:ALK), SEA has been steadily attracting international airlines and non-stop, off-continent routes in the lead-up to its planned launch of a new US$968 million international passenger facility toward the end of 2020.

Seattle now has 21 international destinations outside Canada and the U.S. That’s fewer than half of the 45 such destinations that have non-stop flights to YVR, but SEA aspires to catch up.

To achieve that, it plans to take advantage of passenger numbers that last year were estimated at 51.5 million, or about double YVR’s roughly 26 million passengers last year.

“Seattle is a competitor, and a growing one,” said University of British Columbia adjunct professor John Korenic, who teaches a fourth-year commerce course on aviation management at the university’s Sauder School of Business.

He pointed to Delta Air Lines’ (NYSE:DAL) US$2.6 billion merger with Northwest Airlines in 2008 as a seminal moment that put SEA on the path to becoming an internationally focused airport.

Delta was largely a domestic U.S. airline until that acquisition, while Northwest had some flights to Asia. After the global economic crisis, the combined entity started to make Seattle a regional hub, Korenic explained.

Port of Seattle data shows Delta flew to 13 destinations out of Seattle in 2012. It now flies to 60 locations, many of them outside North America. One route Delta added in 2019, for example, was between Seattle and Osaka.

Alaska Airlines remains SEA’s largest carrier with 91 destinations – up from 71 in 2012.

“The advantage Seattle has over Vancouver, in terms of the local market, would be that it is much more of a business centre,” Korenic said.

“You’ve got a lot of head offices there. We in Vancouver are not at the same level as having Microsoft [Nasdaq:MSFT] and Boeing [Nasdaq:BA] and all those companies out of Seattle. That’s what airlines look for – high-fare traffic. That’s where Seattle really has an advantage.”

Representatives at both airports say they are in talks with airlines about possible future routes but none would go into details.

Port of Seattle spokesman Perry Cooper told Business in Vancouver that SEA is not specifically aiming to snatch passengers from YVR, but rather is aiming to correct a historical imbalance in which Seattle was “underserved” with international routes.

South America could be the tipping point

A game-changing non-stop route for the futures of the Seattle and Vancouver airports would be one to a South American city. That is because neither airport flies non-stop to that continent and the route could connect many cities’ travellers with more efficient connections.

Seattle’s non-stop international flights are to Asia, Europe and the Middle East. Vancouver has flights to Asia, Europe and Oceania (Australia and New Zealand). Turkish Airlines plans to launch non-stop flights between Vancouver and Istanbul, and that route would be the closest one that Vancouver would have to the Middle East. The Canadian government, however, has yet to agree to necessary changes in an international air agreement that would enable the flights.

Having a non-stop flight to a city in South America could lure new airlines that want to link their passengers with that route, thereby providing momentum for future growth.

Were an airline to launch a South American route from either Seattle or Vancouver, it would be unlikely to then launch a similar route from the other airport, Korenic said.

Vancouver Airport Authority CEO Craig Richmond has for years lobbied the Canadian government to expand a transit-without-visa program to allow more people to be able to fly via Vancouver on the way to third countries – at times thinking that the change would be imminent. 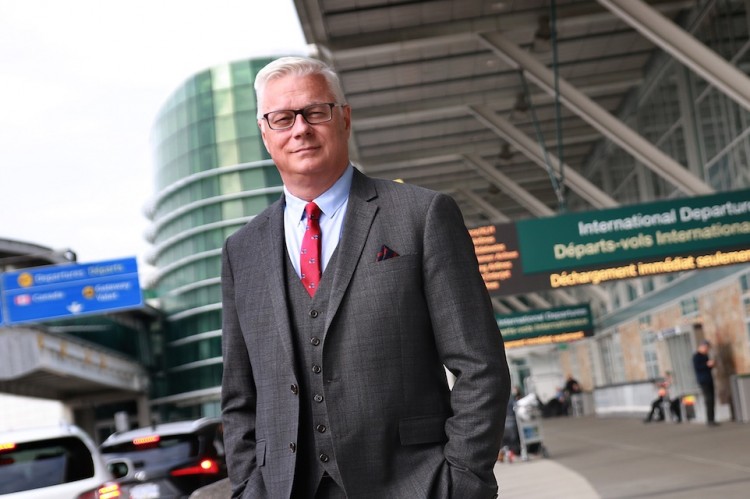 (Image: Vancouver Airport Authority CEO Craig Richmond:  YVR is “in for a dog-fight with Seattle in the next few years” | Rob Kruyt/BIV files)

Citizens of China, for example, need a visa to enter Canada and would need that visa even if they were simply changing planes at YVR on the way to South America.

Richmond has warned for years that the visa requirement deters airlines from launching the flights because of fears that passengers will not want to take the trip. He said many Chinese citizens work in mines in South America, and if Canadian visa requirements are waived for them during stopovers in Vancouver, an airline may be encouraged to launch non-stop flights to South America.

His lobbying succeeded in getting Canadian visa restrictions waived for Chinese citizens flying via Vancouver to the U.S., but that program has not yet changed to allow nationals of countries that require a Canadian visa to fly through Vancouver to a third country, the Vancouver Airport Authority confirmed to BIV in an email.

Cooper told BIV that Seattle has the same challenge.

Chinese citizens require what he called a “transitioning visa” to enter the U.S. if they fly to Seattle as a connection point before continuing to a third country. Not only would getting the visa be a hassle, but the Chinese traveller would also have to collect and recheck baggage in Seattle, Cooper said.

A change in either country’s visa policies may encourage an airline to launch a route to the mining centre of Lima, Peru, or to the business centre of São Paulo, Brazil.

Air Canada (TSX:AC), however, told BIV in an email that it has no immediate plans to announce new routes, though the airline is “continually evaluating opportunities.”

Richmond had expected to be able to announce more new routes in 2019 – “possibly intercontinental” – but the grounding of Boeing 737 Max planes created a shortage of aircraft that kept many airlines from expanding, he told BIV in September.

Competition in the aviation world is fierce, and Richmond knows that it is coming not only from nearby major cities, such as Seattle. The much smaller Abbotsford International Airport welcomed more than one million passengers for the first time in 2019, and it aims to attract airlines in part by having lower terminal fees than YVR’s, and no airport improvement fee – something that YVR recently raised.

During the Vancouver Airport Authority’s 2019 annual general meeting, however, Richmond was asked which airport posed the most serious competitive threat.

“Seattle,” he interjected before the question was even fully asked. “We’re in for a dogfight with Seattle in the next few years.” •