Developers face spiralling costs and political uncertainty as they attempt to deliver workspace and housing in Coquitlam, Port Coquitlam and Port Moody

By Frank O'Brien, Western Investor | January 15, 2020, 2:05pm
Coquitlam has bold plans for development of 1,789 acres into a residential and commercial downtown. | City of Coquitlam

The Tri-Cities, an affiliation of Coquitlam, Port Coquitlam and Port Moody on the northeast edge of Metro Vancouver, is a potential real estate powerhouse.

With approximately 235,000 residents in total, the region offers waterfront, railway and freeway access, the eastern terminus of the SkyTrain network, one of the largest shopping malls in B.C. and perhaps the most challenging industrial real estate in the province.

Together, Coquitlam and Port Coquitlam have more than 16 million square feet of industrial space, but less than one per cent of it is vacant.

An indication of demand is the rapid sellout of the Hub, a new 120,000-square-foot strata industrial project in Port Coquitlam by Conwest Group of Cos., where prices averaged around $330 per square foot.

The attraction to buy rather than lease is underscored by the soaring Tri-Cities industrial lease rates. The average asking rate increased to $13.42 per square foot in the third quarter of 2019 from $11.80 in the second quarter, an unprecedented quarter-to-quarter price hike.

“For local tenants this has resulted in renewal proposals from landlords coming with price increases up to 50 per cent higher than when they originally leased the space five years ago,” noted a late-2019 survey by Lee & Associates, a Vancouver commercial real estate broker. 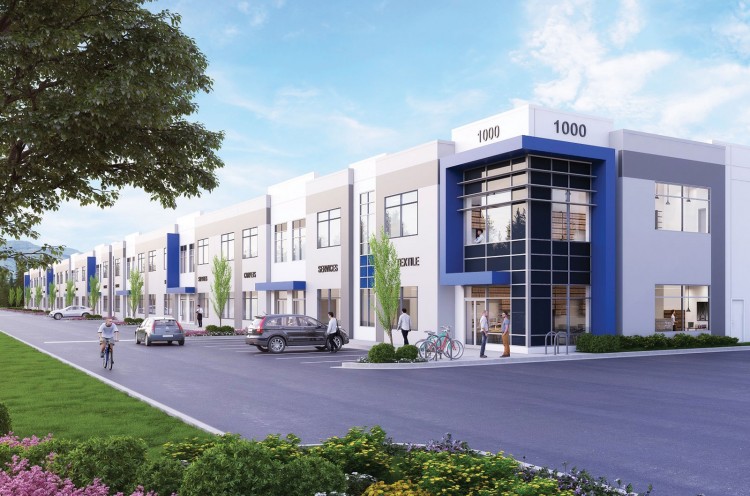 The new Hub industrial centre in Port Coquitlam by Conwest Group of Cos: approximately 120,000 square feet of industrial strata space sold out. | Submitted

Industrial space is selling for an average of $386 per square foot. An example is the third-quarter 2019 sales of 84 Moody Street in Port Moody, a 6,065-square-foot industrial property that sold for $4.1 million; and three contingent strata lots on Seaborne Avenue in Port Coquitlam, totalling 20,575 square feet, purchased for $7.26 million.

“Strata is the future of industrial in the Tri-Cities,” said Lee & Associates agent Chris McIntyre, because of the high cost of land, high lease rates and the prohibitive costs for redevelopment of existing sites.

An acre of serviced industrial land in the Tri-Cities sells for an average of $3 million, if you can find it. A rare 3.27-acre parcel in Port Coquitlam is being offered for $11.5 million by Colliers International.

But it is residential and retail that will likely define the future of Tri-Cities real estate, led by Coquitlam, the largest of the trio. A plan to transform Port Moody, once a heavy-industrial centre, into a residential destination linked to its SkyTrain stations, recently hit a political roadblock.

“Occasionally, there are big steps up and, right now, our City Centre is on the cusp of taking one of those big steps forward,” said Andrew Merrill, City of Coquitlam’s manager of community planning.

Coquitlam’s audacious draft plan covers a 1,789-acre area and is built around a handful of linked commercial zones. First, an entertainment district with bars, restaurants and theatres, retail and even hotels over what is now the Coquitlam Centre mall parking lot.

Port Moody hugs the Burrard Inlet but has seen most of its industrial base disappear. Two years ago the city embraced the concept of high-density residential development around its SkyTrain stations and waterfront. But those plans are now threatened.

A group of property owners say they were “blindsided” by a motion put forth by City of Port Moody Mayor Rob Vagramov that would cut off at the knees its preliminary plans to transform 23 acres of light industrial and commercial property adjacent to transit into a dense, mixed-use urban neighbourhood.

Tim Grant of PCI Developments Corp. said the group, which also includes Beedie Living, Anthem Properties, Woodbridge Homes and architectural firm Perkins & Will, has had several meetings with Port Moody’s mayor and council in the past two years and was assured “of a collective commitment to transparent, collaborative engagement to develop a master plan for Moody Centre.”

But new mayor Vagramov has said that vision for the future “has generated concern.” He said the consortium’s plan “vastly exceeds” a “worst-case scenario” for over-densification.

Now the entire concept appears back on the drawing board.

– With files from Tri-City News