Downtown Vancouver has more restaurants than ever, with quick-service eateries being responsible for much of the recent growth, according to a report released today by the Downtown Vancouver Business Improvement Association (DVBIA).

The report noted 715 restaurants were in a 90-block area of downtown Vancouver in which the DVBIA has members at the end of 2018. That was up about 11%, or 71 restaurants compared with six years earlier, according to the report, Then and Now: An Analysis of Downtown Retail.  More than half, or 392 restaurants, are in the quick-service category, and that includes 49 new quick-service eateries, said DVBIA executive director Charles Gauthier.

“The category of quick-service restaurants primarily caters to the lunch crowd and it speaks to how busy we are in our lives,” he told Business in Vancouver. 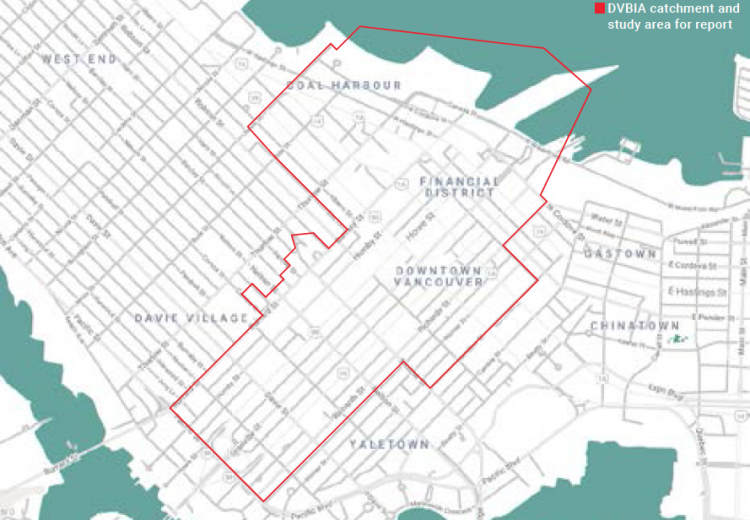 (Above: The DVBIA district | Then and Now: An Analysis of Downtown Retail report)

One innovation within the fast-food sector has been the rise of healthy options and local companies, such as Smak, Tractor and Railtown Café, he said. Another innovation is that these businesses are increasingly capitalizing on meal-delivery companies, such as DoorDash and SkipTheDishes, as well as their own apps to enable customers to preorder meals.

The report largely confirmed what Gauthier said he suspected was the case in terms of what kinds of restaurants are popular.

Given Vancouver’s reputation for being a hotbed of sushi restaurants, for example, the report’s finding that 13% of the restaurants serve Japanese food was not a surprise, he said.

One mild surprise may have been that of the 365 restaurants that closed within that six-year period, 57% of them had been operating for longer than three years. Normal restaurant-industry wisdom is that most restaurants fail within the first year or two.

The other main categories of restaurant covered in the report were full-service restaurants, retail dealers and liquor primary establishments.

He added that the scarcity of new full-service restaurants may be a reflection of the cost of renting space, and paying property taxes.

According to Restaurant Canada’s 2019 foodservice operations report, operating revenues increased nationally by 31% between 2012 and 2017; however, operating expenses also grew by 31%. In Canada, cost of sales and labour are said to be the sector’s two largest expenses.

Notable closures include liquor primary establishments such as the Boss Night Club at 1326 Richards Street and Doolin’s Irish Pub at the corner of Granville and Nelson streets. Both establishments closed in 2012, according to the report. Casual dining full-service restaurants such as White Spot at 580 West Georgia Street, and the Stackhouse Burger Bar at 1224 Granville Street, closed in 2012 and 2017, respectively.