Northern lights, dogsledding and other reasons to visit Iqaluit in the winter

Inukpak offers secret spots with sweeping city views, including a cemetery with a photogenic arch made from bowhead whale bones.

Electric green Northern Lights are dancing through the black Iqaluit sky above a snow-dusted hill where a large steel bell on a twisted pole has been drilled into the rock.

Nobody knows for sure who put the mysterious red bell here or why, but Inukpak Outfitting’s Martine Dupont is happy to share one of the urban myths floating around the capital of Nunavut.

Our loved ones are up in the sky and when you ring the bell, they come down, in the form of dazzling lights, to say hello. There’s another legend, this one Inuit, which says the magical and fleeting lights represent spirits playing with a walrus head.

I know something of the science behind the aurora borealis, but let’s just say it always feels like a miracle to spot the lights in Canadian skies. Especially tonight when the aurora forecast was calling for just a 10 per cent chance of success. 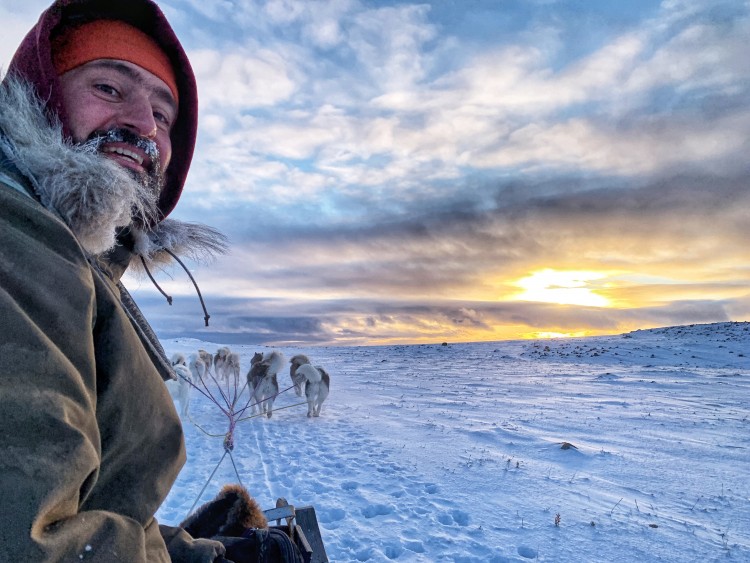 Dupont continues our aurora hunt by quickly zipping over to a boat launch that has an unobstructed view of downtown. The light show continues. Today it’s green. Other days it mutates to shades of yellow, violet, pink and even orange.

It’s the start of winter on Baffin Island. The sea ice is starting to freeze. The number of daylight hours has dwindled to five. The sun, even when it comes out, hangs low in the sky. The 8,000-odd people who call Iqaluit home are ready to have fun. So are the dogs. 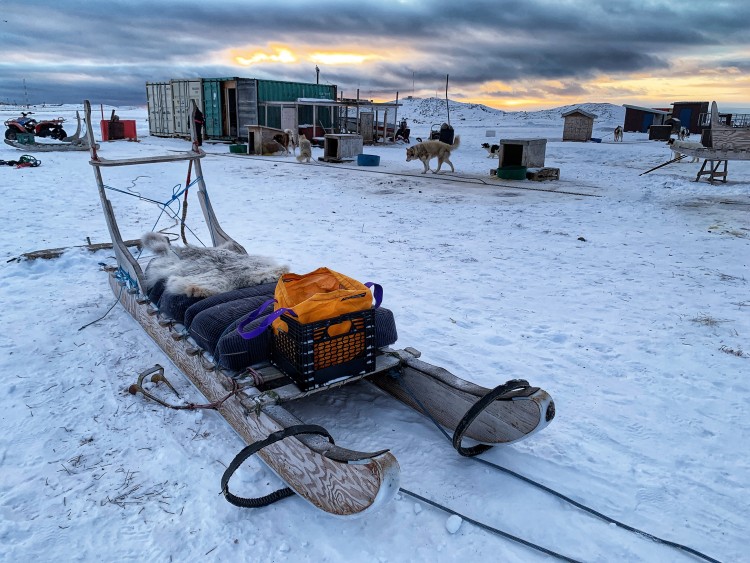 Preparing the dogs for a dogsledding adventure with Kool Runnings. Photo Jennifer Bain

Jovan Simic gets his sled dogs ready, putting on their harnesses and figuring out the current state of their hierarchy. His young company Kool Runnings offers dog-powered adventures. It’s too early to safely travel on the sea ice, so we will brave the rocky tundra.

“There’s a short loop we can do — it won’t take much more than an hour,” Simic promises. “We’re going to be pretty alone out there running through different valleys. I’ll try not to flip you although I flipped Jagmeet Singh last week.”

It’s true — the New Democrat Party leader just visited Canada’s youngest territory with newly elected Nunavut MP Mumilaaq Qaqqaq. Singh, his party’s critic for Indigenous affairs, was thrown from the sled, but was a good sport and jogged through the snow to catch up. 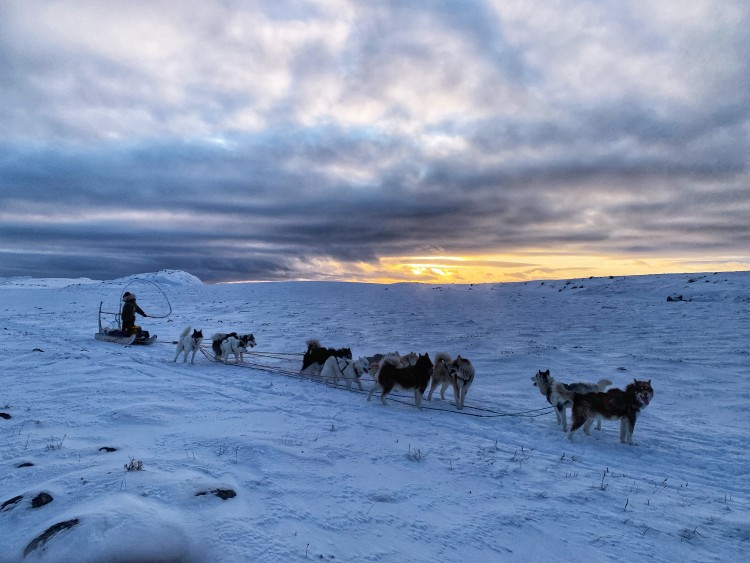 When the sea ice isn’t frozen, Kool Runnings heads out on the tundra. Photo Jennifer Bain

Dogsledding here is different than in southern Canada, where you’re likely to stand on your own small sled as pairs of dogs run in a straight line. Here, Simic’s 12 Canadian Inuit dogs are each attached to a long, wooden sled by their own towlines and fan out to run. The musher (Simic) and the passenger (me) follow behind, seated on a qamutiq (traditional Inuit sled).

“There’s always a chance of ptarmigan and rabbits,” offers Simic. “There was a polar bear not far from here last week. I’ve seen wolves four or five times in the last four years.” None of those creatures come out today — just lots of ravens, a low-hanging sun and endless tundra once we pass through Sylvia Grinnell Territorial Park and cross a narrow river.

We dodge most of the exposed rocks, but it’s Simic who goes flying this time when the sled hits a large rock and comes to a dead stop. 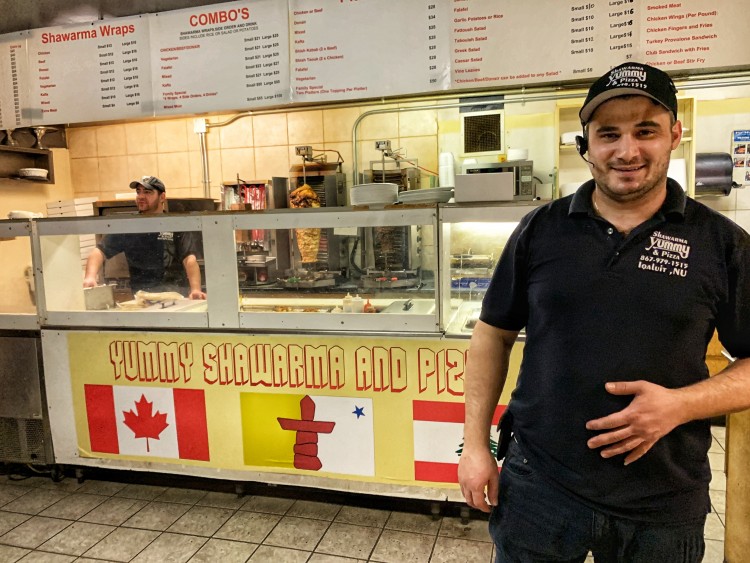 We laugh about the ejection over lunch at Yummy Shawarma, Iqaluit’s first Lebanese restaurant. Owner Khaldoun El-Shamaa happily dishes out extra garlic sauce to go with my chicken shawarma. Later I pop into the popular Black Heart Café for a caffeine fix and food made from scratch

I’ve been to Iqaluit four times — twice on the way to other Nunavut communities and twice as the main event. It’s a ridiculously expensive flight, so a journey that too few Canadians make. Here’s a secret — use Aeroplan miles. It’s just 25,000 points for long-haul flights within Canada, but you have to call the Aeroplan Contact Centre to book so it’s still a largely unknown option.

Once you’re in Iqaluit, hail one of the flat-rate taxis for $8, but don’t be surprised when the driver stops to fill the empty seats. You can explore downtown by yourself on foot, but to cover more ground take the historical and cultural tours that Inukpak Outfitting offers when it’s not leading outdoor adventures. 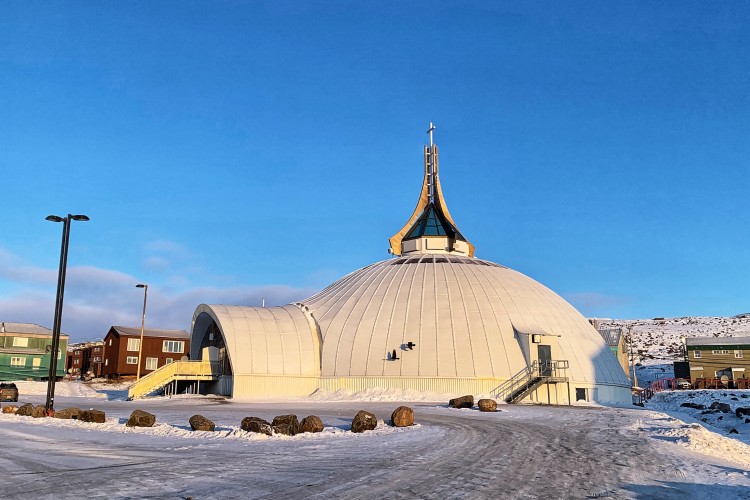 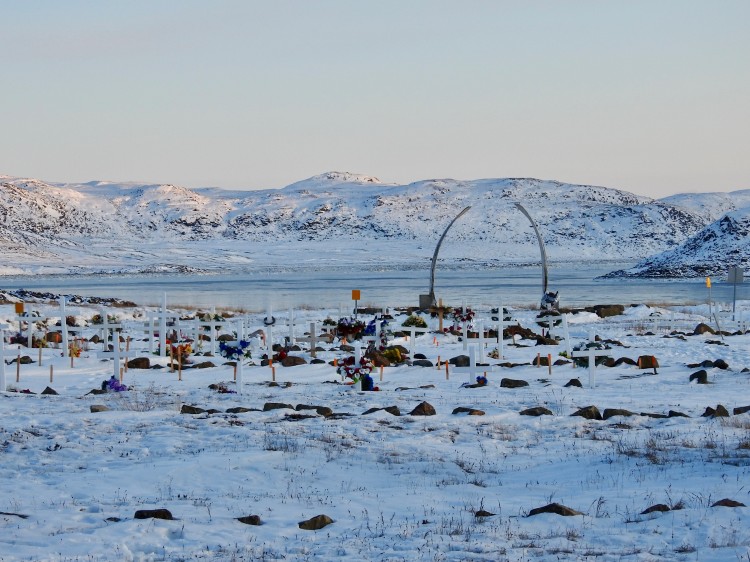 There are secret spots with sweeping city views, a cemetery with a photogenic arch made from bowhead whale bones, and impressive murals on the wall outside the hospital. 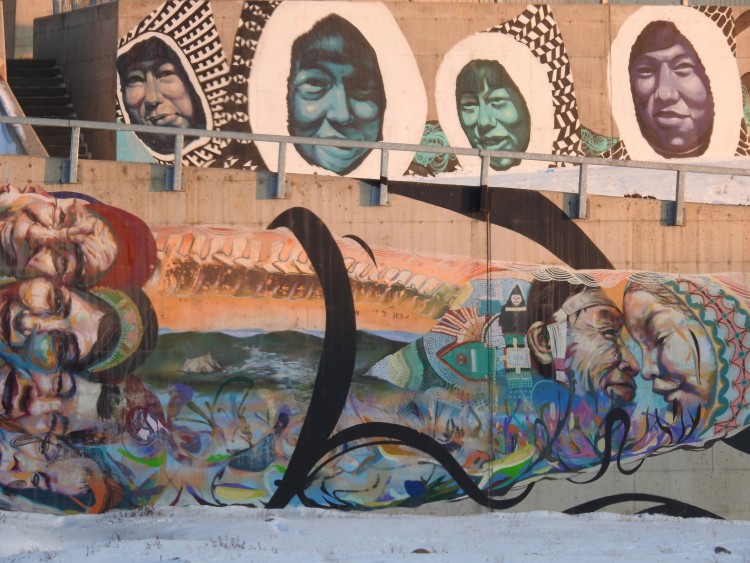 Some of the murals that you’ll see outside the Qikiqtani General Hospital. Photo Jennifer Bain 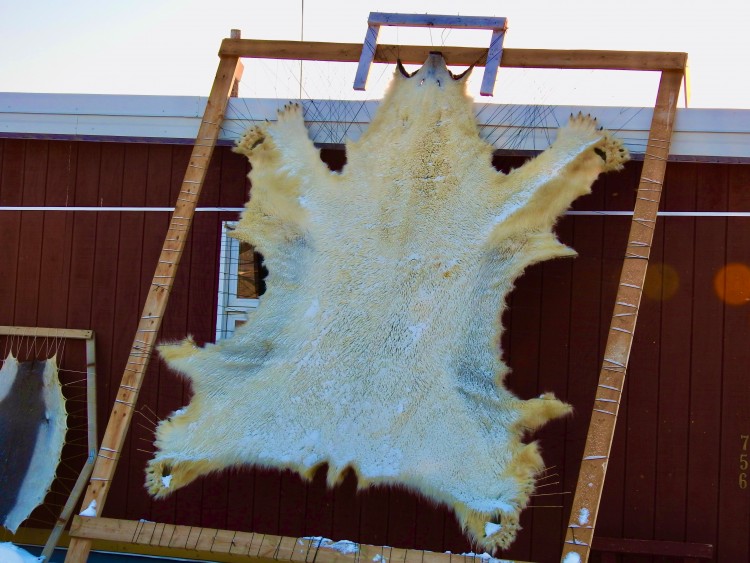 Outside an Iqaluit home, a polar bear and seal skin are seen drying. Photo Jennifer Bain

Keep an eye out for homes where Inuit hunters are stretching and drying polar bear or seal hides in the yard. Don’t miss the Inuit doll collection at the Nunavut Legislative Assembly, which offers free tours. 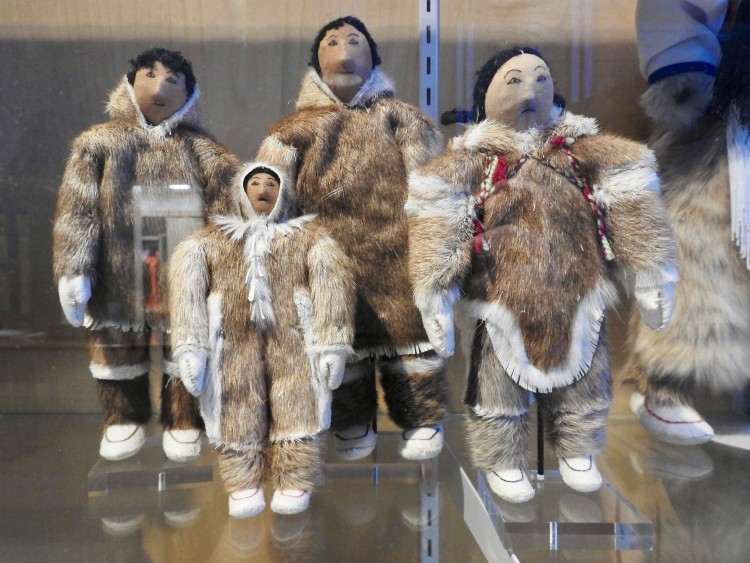 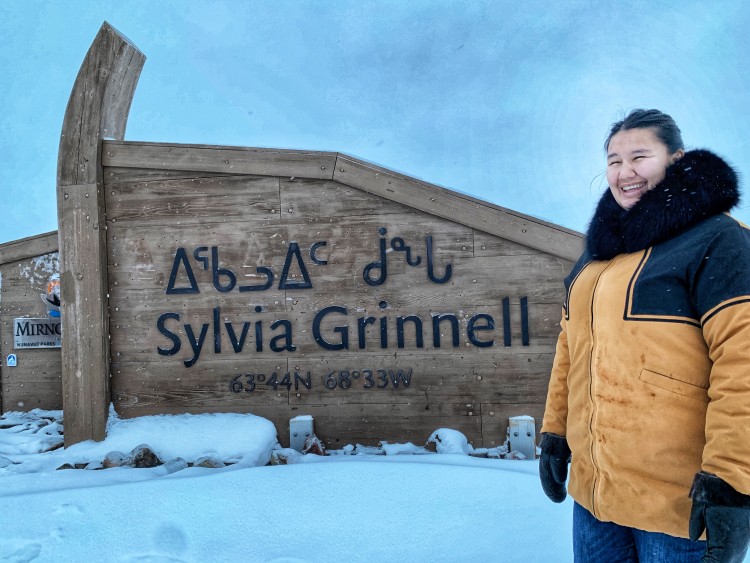 Whatever you do, don’t miss the satellite community of Apex. The Grizzlies, based on the true story of how lacrosse transformed an Inuit community, was partially filmed here and the beach is home to several historic and very photogenic Hudson’s Bay Company buildings. 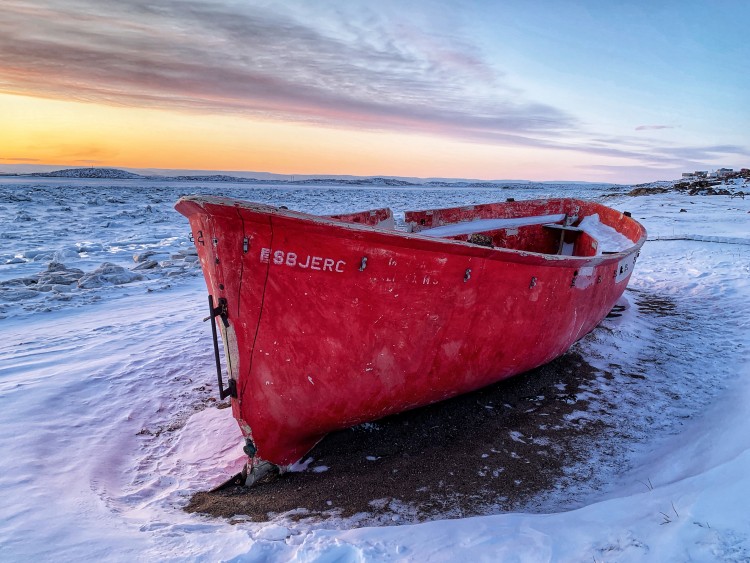 And the abandoned red lifeboat on that same Apex beach? The White Stripes made it downright famous by putting it in their 2007 music video for “You Don’t Know What Love Is (You Just Do As You’re Told)” when they visited Iqaluit during a cross-Canada tour.

I love that song. After admiring the red boat, I climb the hill between Apex and downtown Iqaluit one last time to admire the mysterious red bell, this time in daylight.