By Glen Korstrom | February 12, 2020, 8:08am
St. Regis Hotel Vancouver owner Robert Macdonald would like to open up to six St. Regis hotels in the Lower Mainland | Chung Chow

Glimmers of hope are starting to appear for those who fear Vancouver’s steady loss of hotel rooms is discouraging visitors by pushing up room rates and restricting availability.

Property owners are in various stages of developing several new hotels, even as city bylaws stymie some entrepreneurs keen to open hotels.

New hotels are important to the tourism sector, and established ones keep closing. The 372-room Four Seasons Hotel attached to Pacific Centre, for example, closed late last month after 44 years in business.

City of Vancouver statistics show that the city in mid-2018 had 13,925 hotel rooms, or 1,105 fewer than it did a decade ago. The lost rooms include the 626 suites in the former Empire Landmark and Coast Plaza Stanley Park hotels.

The good news is that on January 30 Vancouver city council unanimously approved Arno Matis Architecture’s application to build a 438-room hotel on a Dingye Property Group-owned site in the 800 block of West Broadway near the future Fairview-VGH station on the Millennium Line extension.

But there’s a long consultation process ahead, and principal Arno Matis said he would not hazard a guess for how soon shovels could be in the ground. 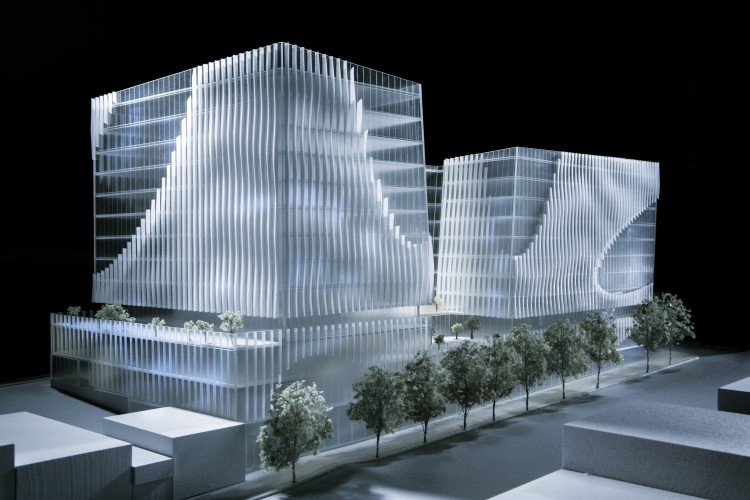 (Image: Arno Matis Architecture has applied to build this 438-room hotel on a Dingye Property Group-owned site in the 800 block of West Broadway | submitted)

Over at Cadillac Fairview, western Canadian director, Tom Knoepfel, told Business in Vancouver that his company plans to renovate the former Four Seasons hotel space and make way for a “world-leading, luxury lifestyle brand” that his company has yet to select.

He added that Cadillac Fairview is negotiating with potential tenants.

Cadillac Fairview could create its own brand and run the hotel itself, but Knoepfel said the future operator “will likely be a third party.”

Robert Macdonald, who owns the St. Regis Hotel Vancouver, has indicated to Cadillac Fairview that he would like to build a St. Regis hotel in the former Four Seasons hotel space, but he told BIV that he has not heard back.

St. Regis is a top-tier brand that Marriott International Inc. (Nasdaq:MAR) operates worldwide, except in Metro Vancouver. Macdonald owns the brand in this region because his independent St. Regis hotel has been in business at the corner of Seymour and Dunsmuir streets for the past 107 years.

“We had a legal tussle on that,” he said. “They lost. I won. So I now own the right to use the St. Regis brand for the whole Lower Mainland. I gave up to them the rights to use the brand outside the Lower Mainland [in B.C.]. That’s how we settled that. They paid me.”

Eventually, Macdonald would like to operate up to six St. Regis hotels in the Lower Mainland, possibly with locations in Burnaby and Richmond. He said he knows people at Marriott and would probably try to partner with its St. Regis operation and link with that chain’s reservation system.

Holborn Group is in the early stages of developing a tower on its Seymour Street site where there is a parkade that connects via a sky bridge to the Hudson’s Bay Co. (TSX:HBC) department store.

That site is across the street and half a block away from Macdonald’s St. Regis hotel, and Macdonald said that he thinks it would be a great spot for a new luxury St. Regis hotel.

Holborn CEO Joo Kim Tiah told BIV that his company in December submitted a letter of inquiry to the City of Vancouver to develop the site.

“Everything is very preliminary at this point in time, and there will be a lot of consultation with the city and public prior to us being able to officially submit for a rezoning for the site,” he said.

Another hotel may eventually be built at 1157 Burrard Street, where there has been a community garden for more than a decade. The city is considering a rezoning proposal to allow for a 47-storey mixed-use tower that would include the hotel as one component.

These new projects are slated to raise the number of hotel rooms in the city, and Sonder plans to open some so-called "digital" hotels, where guests book rooms online and the lion’s share of interactions with hotel staff are online.

Some entrepreneurs, however, are finding that city bylaws are obstacles.

Sharon Cheung, who owns the Panda Pod Hotel in Richmond, wants to open a hotel in Vancouver, but she told BIV that city bylaws prohibit hotels like hers.

Her hotel has 64 sleeping pods fitted with mattresses, small tables that fold out of the walls and charging stations for laptops and phones.

She said Vancouver’s hotel bylaw essentially shuts out her business model because it requires all hotel rooms to have windows and furniture. Her pods, which are the width and length of a mattress, would also be deemed too small, she said. •