By Nelson Bennett | March 28, 2020, 11:39am
New limits placed on Canadians travelling within Canada by plane or bus announced Saturday. | Shutterstock

What happened: New COVID-19 cases in B.C. have spiked up since yesterday by 92 -- the highest daily increase since the pandemic began.

Why it matters: Modelling released Friday, and daily case numbers over the past week, offered some optimism that B.C. could be getting close to an inflection point, but Saturday's numbers may temper that optimism.

B.C. now has 884 confirmed COVID-19 cases. There has been one new death, bringing the total to 17, and one additional long-term health case facility has had an infection. That's 12 long-term care homes now that have had at least one infection of either a resident or staff member.

As of Saturday, 81 patients with COVID-19 are in hospital, and 52 in intensive care.

Public health officer Bonnie Henry said the spike since Friday is not unexpected, and is partly a reflection of increased testing. B.C. has been doing more than 3,000 tests per day.

"But any severe outbreak or clusters of cases is going to tip the scales for us, and we are at that very critical point right now where we need to continue this action together. We must stay apart with our physical distancing.

"We must be united and 100% committed until we flatten this curve for good."

As for when she will know when the outbreak has peaked, she said: "We don't know the peak until we're looking back at it."

The one bit of good news is that 396 people infected with COVID-19 have recovered -- a recovery rate of 45%.

To help cope with a potential flood of patients, the B.C. government is re-registering doctors and nurses, many of whom have come out of retirement. B.C. Health Minister Adrian Dix said that 28 doctors and 309 nurses have re-registered.

While the growth of COVID-19 cases in B.C. has not been as dramatic as in Quebec, and while international travel restrictions are in place, there continues to be movement within Canada -- something the federal government hopes to limit.

Saturday the federal government announced that airlines and passenger train operators must now enforce restrictions on travel within Canada, if any travellers show signs of illness.

And Canadians are being urged not to travel to cottage country as a way of waiting out the pandemic.

As for research and testing of new or existing drugs, Henry confirmed that B.C. researchers are participating in international trials in which existing drugs used to treat other diseases are ongoing.

That includes an anti-malarial drug, hydroxychloroquine, and a drug used to treat HIV.

As of Saturday March 28, there were 4,757 confirmed or assumed COVID-19 cases in Canada, with Quebec having the highest number at 2,021.

Modelling released Friday suggests the growth rate of COVID-19 cases in B.C. is tracking closer to the best-case scenario of South Korea than worst-case scenarios of Hubei, China and Northern Italy. 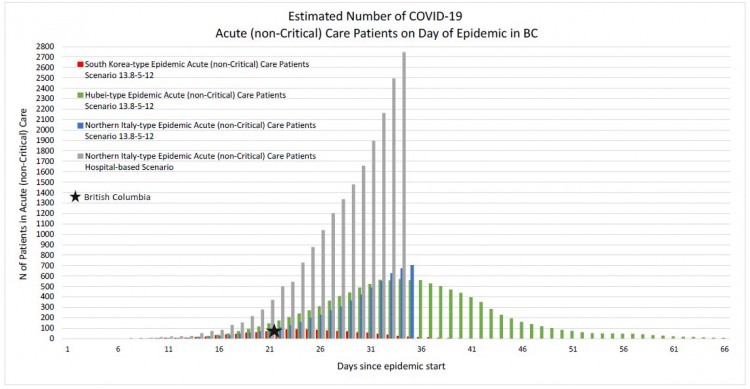 The star marks where B.C. ranks in terms of COVID-19 patients in critical care. | BC government

Here are the number of new cases over the last eight days: