By Glen Korstrom | April 21, 2020, 9:09am
Peregrine president Brian French responded to the COVID-19 crisis by starting to manufacture Plexiglas shields for retailers, and treatment boxes for doctors | Rob Kruyt

B.C. manufacturers have pivoted operations to provide equipment to help slow the spread of the COVID-19 pandemic and respond to pleas from governments for industry to step up.

Whether it is breweries that have started to bottle hand sanitizer, pillow manufacturers that have launched new lines of face masks or others that have retooled to make face shields, business owners are showing ingenuity to produce useful, and sometimes vital, goods.

While B.C. provincial health officer Bonnie Henry has said that the province has sufficient personal protective equipment (PPE), the risk remains that outbreaks could emerge, hospitals could be overwhelmed and workers could need more supplies.

“We’ve started domestic production of certain things, like gowns for example, which were a challenge,” Henry said April 11.

Peregrine president Brian French is one of many entrepreneurs working hard to produce supplies useful in slowing the spread of COVID-19 while continuing to employ as many people as possible – and still eke out a profit.

Before the global pandemic descended on B.C., French’s business generated about $14 million annually by making primarily tabletops for booths at restaurants and other millwork for the hospitality sector at its 50,000-square-foot Burnaby facility.

French said he had to lay off about 15 of his 85 employees, and he shifted production to add Plexiglas shields that protect cashiers at retail checkouts. He quickly used up all the Plexiglas he had on hand and reordered more from distributors.

Peregrine’s Plexiglas work then morphed into new designs. French’s workers started producing what he called Plexiglas “treatment boxes,” which have holes cut out of the sides.

Doctors can place the boxes comfortably over infected patients’ heads and then put their hands through the holes so they can perform tasks such as inserting oxygen tubes.

“We donated the first few to get the prototype working,” French told Business in Vancouver. “Then we charged for the second batch.”

The shields retail for around $200 apiece, depending on how many are purchased. 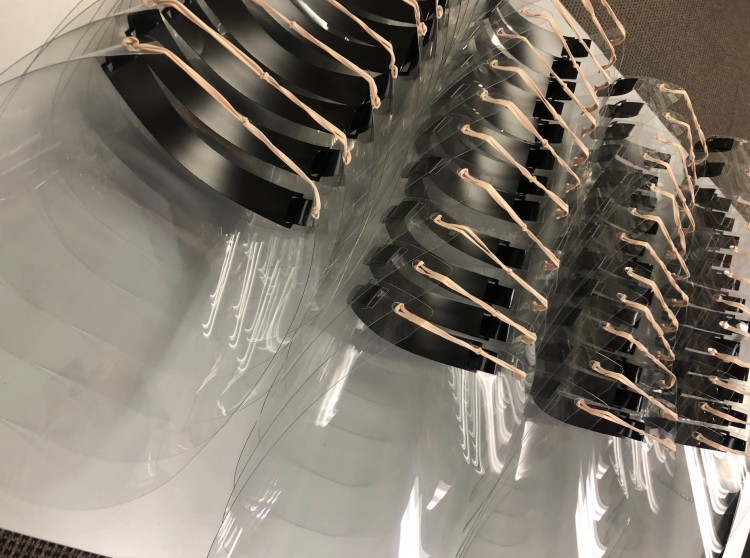 (Image: Face shields made by Packright await inspection before being shipped to a client | submitted)

Chiu’s venture before the crisis generated about $10 million in annual sales from making plastic-clamshell packaging for food such as tomatoes or spinach. Demand remains strong for his products and, far from having to lay anyone off, Chiu has been adding to his pre-COVID-19 staff count of about 50 people.

Chiu also leased about 2,000 square feet of space in Port Coquitlam so newly hired workers can assemble the shields. Initial face-shield production and assembly were in Packright’s 24,000-square-foot facility in Langley but Chiu told BIV that he needed more space in order to ensure that all employees could stay the required two metres away from each other.

“This is a critical component to slow down the spread [of COVID-19],” he said.

Providence Health Care has bought thousands of the shields, while other customers include small medical clinics, doctors and dentists.

Other companies making face shields include Langley’s Method Innovation Partners Inc., which collaborated with industry groups such as the Manufacturing Safety Alliance of BC, BC Food & Beverage and Canadian Manufacturers and Exporters, as well as individual businesses such as Richmond’s Fine Choice Foods Ltd. to design a face shield for workers in the food-processing sector.

“PPE was very difficult to source, and I felt it was my obligation to find a creative partner to make these important face shields for my staff,” said Jason Longden, CEO of Fine Choice Foods, which makes spring rolls, dumplings and other products.

“It is absolutely critical at these times to take every proactive measure to protect our workers in food manufacturing, which is considered an essential service.” •