Cannabis sales in B.C. are soaring thanks in part to the COVID-19 pandemic.

They surged in March to a record monthly total of more than $23.5 million, according to Statistics Canada. That’s more than eight times the $2.84 million that British Columbians spent on legal weed in the same month a year ago.

The same trend held true countrywide. Canadians spent nearly $181.1 million on legal cannabis in March, or nearly triple the $60.9 million that they spent in March 2019, according to the federal statistics agency.

Some factors at play, particularly in B.C., include:
•more legal stores;
•fewer black-market stores;
•newly legal product categories, such as edibles;
•improved product quality; and
•customers’ desire to stock up when governments were starting to restrict business operations to slow the spread of the global pandemic.

B.C. had issued 135 retail licences to entrepreneurs who wanted to open cannabis stores in October, just before the one year-anniversary of Canada legalizing adult-use cannabis consumption.

That number jumped to 176 by the end of 2019 and has since risen to 254, Minister of Public Safety and Solicitor General Mike Farnworth told Business in Vancouver on May 27.

No government-run stores are yet in Metro Vancouver, although one in New Westminster's Queensborough district, and one in Port Coquitlam are expected to open soon.

Farnworth said the delay in having stores in the region is because it is in "many ways up to the local governments."

Municipalities get to say whether they will allow government stores, private stores, or a mixture of both. They also may set a cap on the total number of cannabis stores, or zone specific sites or districts where the stores would be able to apply for licences.

Farnworth then singled Burnaby out as an example, and said, "Burnaby has said they only want public stores but I haven't seen a lot of action in regards to that municipality."

Illegal cannabis stores continue to operate in the province, but Farnworth said his ministry’s community safety unit (CSU) has warned more than 270 black-market operators that they were not in compliance with provincial law. About 90 of these stores have closed, he added.

The unit has also seized records and cannabis and fined 38 illegal operators.

The Greencity Cannabis Boutique, at 1232 Burrard Street, for example, posted a notice on its doors in early March saying, “This was a tough decision to make, but the provincial government is forcing us to close.” 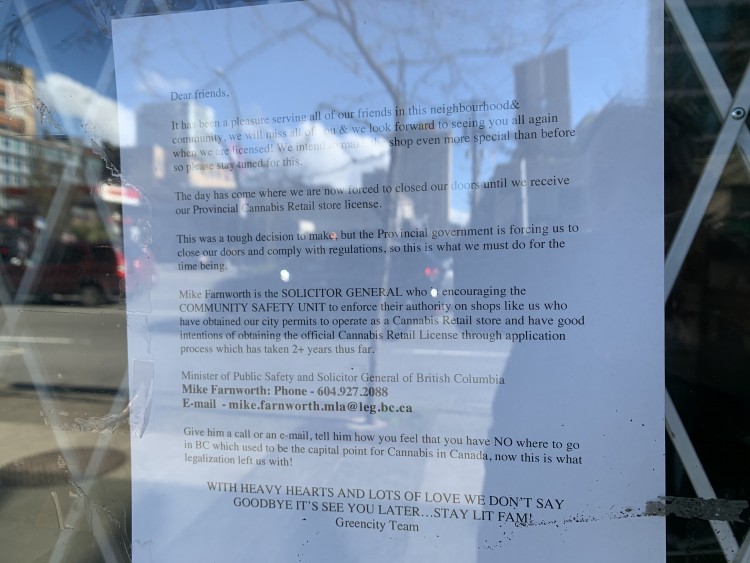 (Image: Greencity Cannabis Boutique, which does not yet have a provincial licence to operate, posted a notice to its front door in early March urging customers to contact Solicitor General Mike Farnworth and tell him that without the store they don't have anywhere to go in B.C. to obtain cannabis | Glen Korstrom)

While some authorized cannabis retailers complain that fines to black-market competitors are too low, Farnworth told BIV that the province’s formula for fining illegal operators twice the value of their illegal inventory is “appropriate.”

The largest fine that the CSU issued was for $1.5 million. One large fine that was paid was for $750,000, said Farnworth.

“The CSU will adjust its methods to make sure that they are able to go after those who deliberately want to keep thumbing their noses, but we’re pleased with the way enforcement has been going.”

Farnworth suggested that another reason for rising legal-cannabis sales is that producers have upped their game by improving the supply chain and product standards.

Several cannabis retailers told BIV that the legalization and availability, starting in late December, of edibles, infused-drinks and vaping products has also bumped up sales – but also that the supply chain for those products has been unreliable.

Choom (CSE:CHOO) CEO Corey Gillon said he sold out of gummy bears soon after his store on West 2nd Avenue opened on May 15. Sales of vaping products have been strong, at about 20% of overall sales, and he plans to partner with vape-product maker Dosist to open a kiosk within his store later in June.

Gillon said that a more likely reason for the spike in sales in March was that when the COVID-19 pandemic prompted the B.C. government to declare a state of emergency and restrict dine-in service at restaurants as well as services such as haircuts and manicures, panicked consumers went on a buying spree.

“People were stocking up, I’d say, for a good week there,” agreed Hobo Cannabis Co. owner Jeff Donnelly. “That one week’s sales, out of those four weeks, really benefited us.”

In April, the B.C. government started allowing private cannabis sellers to take online orders as long as customers paid for products in-store and picked them up in person.

Donnelly, Muse Cannabis president Geoff Dear and other legal private sellers have told BIV that they would like the government to go further and allow e-commerce sales.

Farnworth told BIV that he is open to having the B.C. government’s online retailer compete head-on with online legal private sellers.

“We’re certainly looking at it," he said.

"One of the things that I want us to do is be innovative and be able to operate in a way that supports the industry and reflects what consumers would like as well.” •