By Nelson Bennett | July 22, 2020
A surge in lumber prices might do little to help B.C. forest companies, which had been suffering declines even before the COVID-19 pandemic | ImagineGolf/Getty

As governments look to kick-start economies stalled by pandemic restrictions, natural resource sectors say they are in a good position to put British Columbians to work.

B.C.’s forestry sector could be one of them, especially given a recent spike in softwood lumber prices, but the industry is being crippled by disproportionately high operating costs – something the provincial government could address but appears unwilling to do, says Susan Yurkovich, CEO of the Council of Forest Industries (COFI).

“This is a sector that actually can get people back to work sooner,” Yurkovich said. “We’ve been operating during the pandemic with safe work practices, and we can deliver a tonne to the economy.”

But starting last year, a wave of sawmill closures and curtailments took place in B.C., and now pulp mills and other secondary industries are poised to fall like dominoes.

Six sawmills permanently closed in 2019, and several more took extended curtailments. And, as predicted, pulp mills are starting to go down, too, because they rely on sawmills for wood waste.

Paper Excellence announced in June that it would shut down its pulp mill in Mackenzie indefinitely, and a number of other pulp mills in B.C. have been temporarily idled.

“It’s a huge blow to our community,” said Mackenzie Mayor Joan Atkinson. “There are about 250 well-paying jobs.”

The Mackenzie pulp mill closure isn’t permanent, but it is indefinite. It follows, and is linked to, the indefinite closure of a Canfor Corp. (TSX:CFP) sawmill in Mackenzie, which employed 220 people and supplied the Paper Excellence pulp mill with wood waste. Conifex Timber (TSX:CFF) also closed a Mackenzie sawmill last year, but it just recently restarted. 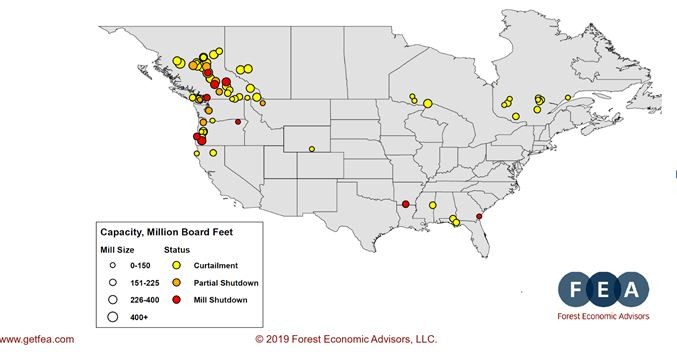 B.C. has had a disproportionate number of sawmill closures, | Forest Economic Advisors

B.C.’s annual allowable cut has declined due to a mountain pine beetle epidemic, forest fires and increased conservation that has prohibited logging in large areas of timber.

But it’s not just a shrinking timber supply that is behind the recent closures and curtailments. Companies operating in B.C. also face high operating costs due to high stumpage rates and red tape.

North American lumber prices have soared 75% in recent weeks, Taylor said. Many sawmills in North America were idled due to the pandemic, and when the demand for lumber started picking up, there was a shortage of inventory. That drove prices up from about US$300 per thousand board feet to US$500.

Whether it is a temporary spike remains to be seen. The higher prices will benefit the mills still operating in B.C., but it probably won’t bring back mills that were indefinitely shut down. Lower-cost jurisdictions will benefit from the increasing lumber prices, and B.C. is no longer one of them.

Taylor said Premier John Horgan’s recent comments on the industry highlight the government’s antagonistic approach to B.C.’s larger forestry companies, about five of which account for the majority of Crown tenure holdings.

When responding recently to the closure of the Paper Excellence pulp mill in Mackenzie, Horgan said the industry is “in transition.”

“I had a conference call with the Council of Forest Industries a few weeks back,” he said at a recent press briefing. “We’ve been working very diligently, trying to be as co-operative as we can be with an industry, quite frankly, that is in transition.”

That “transition” includes a transition of investment capital to other countries by companies that were founded in B.C. The recently announced planned acquisition of three sawmills in Sweden by a Canfor subsidiary is just the latest example of B.C. forestry giants voting with their feet.

While he acknowledged the “historic contributions” forest companies have made to B.C., Horgan’s response to the current situation has been to remind companies like Canfor who owns the trees they cut and that they have obligations to local communities, not just shareholders.

“I reminded the forest companies that, by and large, the forests that they work in are not theirs – they’re public forests,” Horgan said. “They have tenure arrangements – contracts with the people of British Columbia – to harvest that wood. And those contracts historically have meant that there be a benefit to communities.”

“This is, unfortunately, the way the government looks at it – the industry is the bad guys and they have all the timber,” he said.

Horgan has said that higher value-added manufacturing, like engineered wood products, is the way forward because it makes higher value use of what timber is available.

“I believe that more value and less volume is the only way that industry will continue to thrive in British Columbia,” he said.

Taylor’s response: “You want to create a value-added industry? Well you’ve got to have a healthy primary industry.”

And right now, the primary industry is shrinking due to high operating costs. Between 2016 and 2019, fibre costs increased 7% on a global average, Taylor said, but increased 33% in the B.C. Interior. That’s not just because of a general decline in the available harvest; it’s also due to stumpage rates.

The industry has been calling for a reform to the formula for calculating stumpage rates, but the B.C. government worries that changing the formula will only give the U.S. softwood lumber lobby more ammunition to claim harm and push for more anti-dumping duties on B.C. lumber exports.

But as Taylor pointed out, other provinces have managed to structure their stumpage rates so that mills can keep operating, while B.C. mills have shut down.

“Why don’t we do what Alberta does?” Taylor asked. “Alberta’s mills have not curtailed, and they basically have a stumpage system that is tied to lumber prices.”

The provincial government has implemented a number of new regulations and measures that are intended to provide more fibre to producers, but it does not appear to be working.

“Government keeps tinkering and tinkering with more regulations here and there trying to make things better, and it just makes things worse over time,” Taylor said.

“B.C. is the one of the places in the world I would never recommend you invest because of all this government interference that keeps coming along, and it creates distortions.”