Vancouver park board readies to vote on public drinking in parks

Debate on the issue has lingered through the summer, after it first came to the board on June 8

By Glen Korstrom | July 25, 2020, 3:15pm
David Lam Park, near Yaletown, is one of the 22 parks where Vancouverites may soon be able to drink alcohol | Vancouver park board

Vancouver park commissioners are readying to resume debate and vote on Monday (July 27) about whether and exactly where Vancouverites will be able to legally drink alcohol in city parks.

The board was set to vote on the matter on July 6, when the proposal was to allow a three-month trial for drinking in parts of 10 parks. Instead, they told staff to study the issue and draft a proposal to allow drinking in at least one park in each of the city's 23 neighbourhoods.

Staff has come close to that, by drafting a recommendation to allow public drinking in 22 parks until October 12, during the hours 11 a.m., until 9 p.m.

The issue of allowing drinking in designated areas of parks rose to prominence early in the COVID-19 pandemic, after the B.C. government ordered bars and restaurant dining rooms to close. Some argued that many residents did not have yards or outdoor spaces, and that they would want to have picnics to enjoy eating outside the home. It was unfair, the argument went, that these people not be able to have an alcoholic drink with their meals.

Nonetheless, the drive to have the park board officially allow drinking alcohol in public parks has not faded, and many residents openly flout prohibitions against drinking alcohol on beaches and in parks.

Park board staff say in their report that the pilot project would not start until mid-August and that it would be contingent on the B.C. government changing the B.C. Liquor Control and Licensing Act – something Victoria has said it would do.

Park board staff's recommendation also assures commissioners that "park board has exclusive jurisdiction and control over all areas designated as permanent and temporary parks in the City of Vancouver, including any structures, programs and activities, fees, and improvements that occur within those parks. The board may pass, amend, and repeal by-laws for the control, regulation, protection, and government of these parks and of persons who may be therein."

All of the parks that staff are recommending be included in the trial have at least seasonal washrooms. 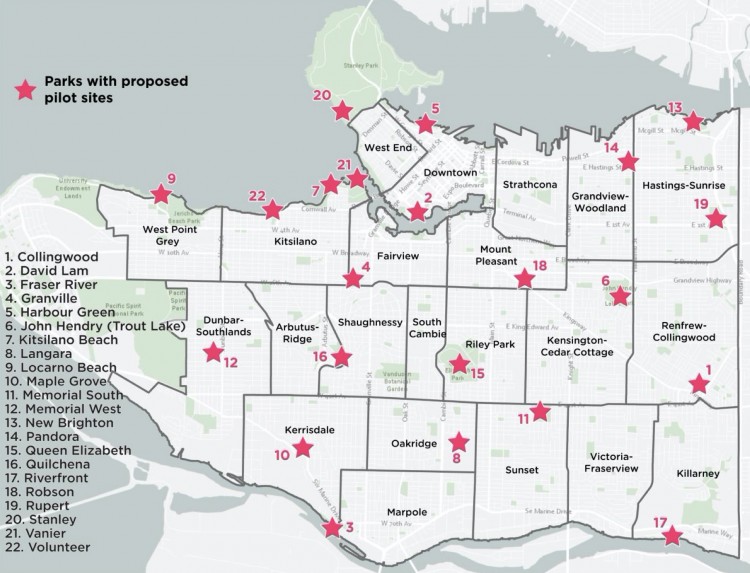 (This map shows the city parks where residents may be able to soon drink alcohol, and it is from the staff report)