The B.C. government intends to amalgamate the province’s 20 health profession regulators into six large regulatory colleges that will be directed by a new oversight body.

“If you look across Canada in terms of regulating health professionals, it will put B.C. on the cutting edge,” said Dix.

These colleges are supposed to act in the public’s interest, and major roles include setting professional standards for the profession and licensing and disciplining practicing members.

The changes were prompted from public consultations where general concerns were cited about the existing colleges, such as a lack of transparency, public protection and efficiency. 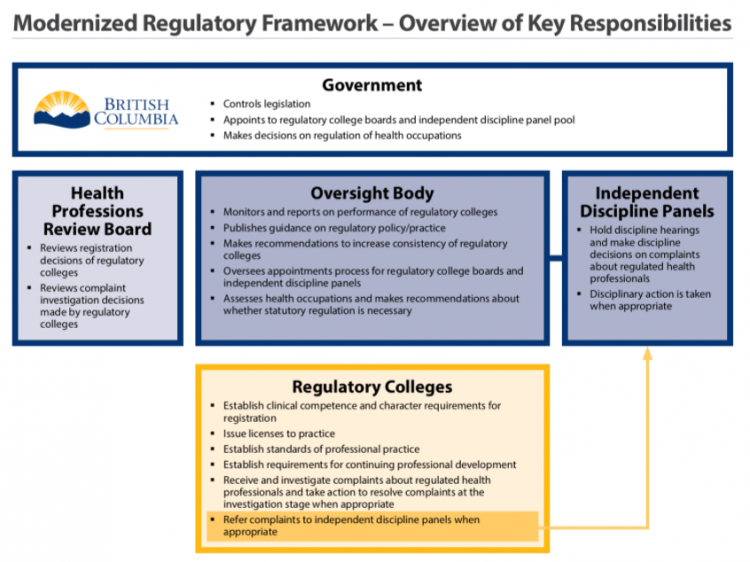 The changes also follow a December 2018 independent report on the College of Dental Surgeons of B.C. (CDSBC) accepted by the Ministry of Health in April 2019. The Cayton Report, authored by Harry Cayton, former chief executive of the United Kingdom’s Professional Standards Authority, called for “a complete overhaul of the way health professional regulation is conceived” in B.C.

Cayton had determined in his review of the CDSBC that its relationship with professional dental associations was too close.

When asked by media why the changes were occurring, Dix cited the need for “stronger and more robust organizations.”

He said it is difficult for professions with few members to regulate themselves. For example, there are only 268 denturists in B.C., whereas there are 10,432 dental surgeons (dentists) and 4,012 hygienists. All of them have their own college but by next year they will have just one regulator.

“There is an advantage of economy of scale. The coming-together will create efficiency,” said Dix.

Cayton found registrants of the smaller regulators pay the highest fees, some paying over $2,000, while nurses, for example, pay between $450 and $650 given they have over 60,000 members.

Based on the information provided Thursday to media, the government review did not examine the current state of disciplinary investigations and findings, including whether the professions were adequately funding their own colleges.

The CDSBC, for example, shows one disciplinary decision in the court reporting system since June 2015.

Dix said the funding model driven by member fees would remain the same.

However, he said, “should more resources be required that will be a decision taken in part by the college and, in the start-up phase, support provided by the government,” said Dix.

A steering committee, advised by Cayton, has recommended a new discipline process that further separates the investigation process by forming independent discipline panels.

The steering committee has also recommended complaints under investigation be acknowledged by the colleges, should they fall into the public realm, say, by way of media. At the moment, colleges will not acknowledge ongoing investigations.

As well, unlike the present, if a college agrees to a consensual agreement for reprimand or remediation, then information about this agreement should be made public. But if the inquiry committee determines no action is required, the complaint should not be made public, the committee has recommended.

The oversight body will remain independent of the existing Health Professions Review Board of British Columbia, which adjudicates complaints against the existing 20 colleges and will continue to do so with the six new colleges.

The committee was a non-partisan effort consisting of Dix, Norm Letnick, health critic for the BC Liberal Party, and Sonia Furstenau, health critic and house leader of the BC Green Party

The recommendations will be presented to the executive council for their consideration. If the members agree with the recommendations, legislation will be drafted and brought forward to the legislative assembly for consideration. If passed, amendments to the Health Professions Act will put into place the legislative framework required for their implementation.