Premier John Horgan on plan: ‘I’m excited about it. Am I apprehensive? Sure.’

By Mike Howell | August 18, 2020, 5:20pm
Students, teachers and support staff are set to return to schools in September, despite COVID-19 cases continuing to rise in B.C. File photo Dan Toulgoet

It is with equal levels of fear, anxiety and uncertainty that a teacher from Richmond, a parent from Langley and a student from Pitt Meadows contemplate a return to school in September.

In a human experiment like no other since the pandemic was declared in March,

more than 600,000 students, teachers and staff are expected to resume classes in B.C. as part of the government’s kindergarten to Grade 12 back-to-school plan.

It is not, as Premier John Horgan told reporters Aug. 12, a plan that is without concerns from government, which continues to say restarting in-class instruction is the right thing to do for a child’s social, academic and mental development.

“I’m excited about it,” Horgan said. “Am I apprehensive? Sure, but I think that we can go into this with the best of intentions and have the best outcomes, if we all work together.”

Horgan made those comments the day before Lisa Descary, who teaches math and science at Steveston-London secondary school in Richmond, participated in a small protest outside Health Minister Adrian Dix’s constituency office on Joyce Street in Vancouver.

She was there with other teachers, parents and a student concerned about the plan. Dix, at the time, was in Victoria with Provincial Health Officer Dr. Bonnie Henry releasing more COVID-19 data, announcing 78 new cases.

“It is going against everything that Dr. Bonnie Henry has told us we need to do to flatten the [epidemiological] curve,” said Descary, while holding a sign calling for smaller class sizes. “Instead of less faces in larger spaces, it’s putting more student faces in poorly ventilated, under-funded, crowded indoor spaces, and I’m terrified.” 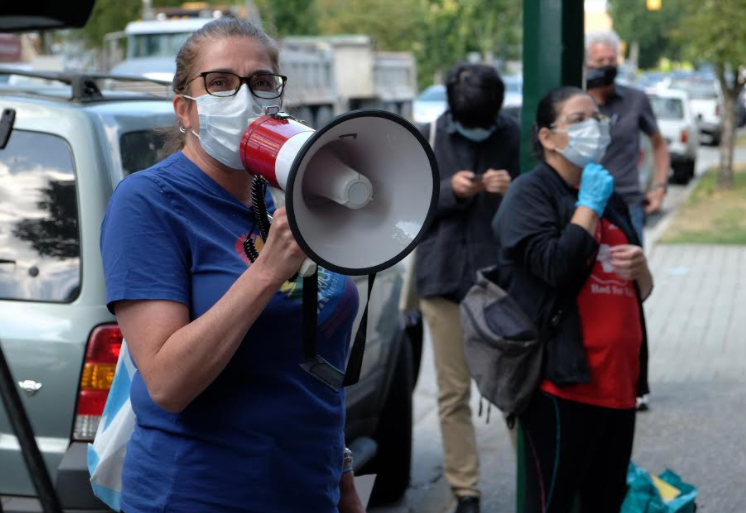 Stacey Wakelin, who organized the protest with former Vancouver school trustee Carrie Bercic, has a son going into Grade 12 and a daughter about to start Grade 10 at R.E. Mountain secondary in Langley.

Wakelin is a coordinator of the SafeSeptemberBC.com website and Facebook group that have worked as sounding boards for parents around the province concerned about sending their children back to school.

Parents, she said, want changes to the plan, which are being voiced in a letter to Education Minister Rob Fleming. They’re asking for a two-week delay to reopen schools to better understand the guidelines, to make masks mandatory when feasible, to reduce class sizes and offer blended learning options for students.

Wakelin’s husband has contacted the Langley school district about an online option for the couple’s children, or a model similar to the one in June where students returned for a couple of days while the balance of instruction was done online.

“I would really like my kids back in school,” she said. “That’s what I’m hoping to see. My son has gone through his entire school career with a lot of these kids, and I’d like him to be able to finish it.”

The “mixed messaging” from Henry and government is what troubles Wakelin, who emphasized she has had the utmost respect for Henry and Dix until the back-to-school plan was released July 29. 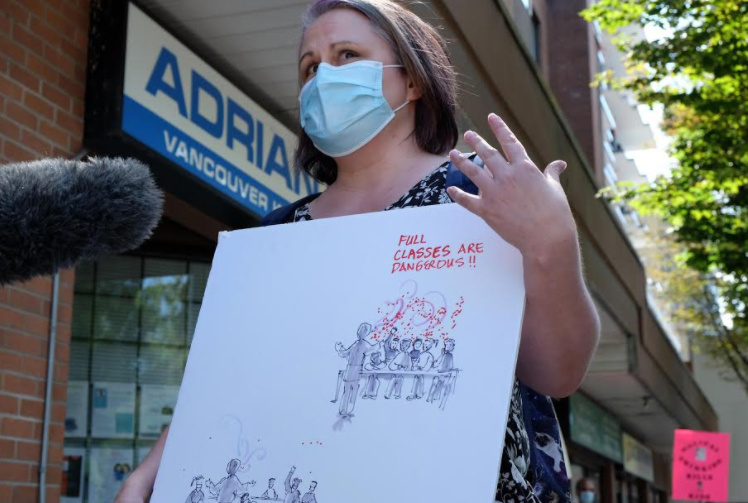 Parent Stacey Wakelin is concerned about sending her two kids back to high school in Langley. Photo Mike Howell

The B.C. government will spend $45.6 million to implement the plan, which includes enhanced cleaning of schools, adding hand-washing stations, providing reusable masks and other safety measures.

In recent weeks, when questions have arisen about the government’s plan, Henry has said she doesn’t “necessarily expect there to be [COVID-19] cases in schools” but that it was “inevitable there probably will be some.”

Current worldwide data on COVID-19 has shown a very low infection rate in people 19 years old and under, and even lower in children under the age of 10, according to government.

Data from Canada’s Public Health Agency shows more than 9,500 people aged 19 or younger out of 119,505 cases reviewed had tested positive for COVID-19 in the country, as of Aug. 17.

That data became available the same day the B.C. government announced that masks will be required for staff, middle and secondary students in high traffic areas such as on buses and in hallways, “or anytime outside of their learning group whenever physical distancing cannot be maintained.”

Masks will not be required in classrooms.

Henry has cautioned masks are “an additional layer on top of the other layers that we use to keep each other safe, and it is the least effective of the many layers that we have.”

Physical distancing and keeping gatherings of people small are more effective measures to prevent transmission of the disease, she said in a July 23 briefing to reporters.

The government’s plan calls for students to be placed in “learning groups” of no more than 60 at elementary and middle schools, and a maximum of 120 at high schools to reduce the number of close, in-person interactions.

It will be up to each of B.C.’s 60 school districts to tailor the plan to meet the ministry’s guidelines. That could prove challenging for districts with large school populations, most of which are in Metro Vancouver.

Sixteen high schools in the province have student populations between 1,500 and 2,000, including Terry Fox secondary in Port Coquitlam.

That’s where Josh Czeto, who lives in Pitt Meadows, is a student and looking to begin his Grade 12 year. Czeto said he doesn’t want to return, saying he would prefer an online option similar to what students transitioned to in March. 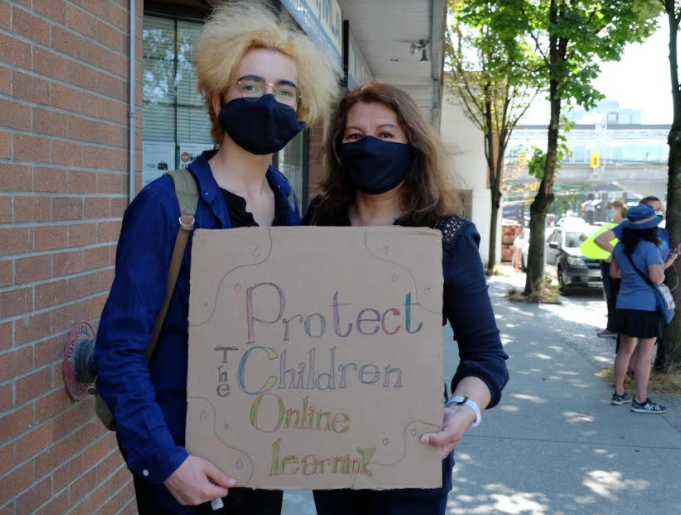 He and his mother Florence attended the rally outside Dix’s office, with Czeto saying his concern about learning in a classroom is shared by friends, who fear a return to school could lead to more transmission of COVID-19.

“One of the bigger worries with my friends is that there are these types of people in schools who don’t care about COVID, who don’t think it’s real,” he said, holding a sign calling for online schooling. “I don’t want to take that chance with the general public, to be honest. I think it’s ridiculous to make people take that chance. Seems like the only people who are not on board with this are the people who have to show up, like the teachers and the students.”

An emailed statement from the Ministry of Education was provided to Glacier Media in place of an interview with Fleming in response to concerns raised by teachers, parents and students.

The statement, which repeated most of what was announced in the back-to-school plan, emphasized that B.C. was the only jurisdiction in Canada that returned students to the classroom in June “and this has given us valuable information that we are using to develop our plans, ensuring health and safety at schools remain paramount.”

Teachers and staff are scheduled to return Sept. 8, before students arrive Sept. 10 and 11 to understand what learning during a pandemic will look like in their schools.