Unprecedented demand destruction for oil due to the COVID-19 pandemic, the resulting global recession, and an oil price war promises to produce a good-news, bad-news story for Canada, with most of the bad news landing in Alberta and the good news in B.C.

According to a new study by the Canadian Energy Research Institute (CERI), a prolonged global recession and demand destruction could permanently eliminate 600,000 barrels per day of oil production in Canada, mostly from Alberta. That’s a worst-case scenario.

The best case scenario is a temporary output decline of 300,000 bpd in 2020 alone, again with Alberta taking the biggest hit, before recovering in 2021.

Global energy demand is estimated to fall by around 6% in 2020 compared to 2019. That is seven times worse than the decline in oil demand from the 2008-09 financial crisis, which triggered a global recession, according to the International Energy Agency (IEA).

CERI has used three scenarios, based on how long and how deep a global recession or depression might last, to estimate when Canada’s oi land gas sector might recover to pre-pandemic levels of production, spending and exploration.

In other words, Canada would permanently lose about 13% of its oil production, in the worst case scenario, almost all of which would be from Western Canada – mainly Alberta.

“We assume that the oil production cut would not affect Newfoundland and Labrador oil production, nor the C5+ (light hydrocarbons) and condensate production from British Columbia and Alberta,” the report notes.

The modelling suggests the lost production in Alberta would only start to be recovered after 2022, with Alberta and Saskatchewan leading the growth between 2022 and 2025.

As for natural gas, CERI expects to see natural gas production fall in Alberta only, due to the loss of demand from oil sands production.

“As bitumen from oil sands is mostly produced in Alberta, we expect that only Alberta’s natural gas production will be affected, and the other provinces will not experience a substantial production change,” the report states.

In B.C., natural gas production is expected to increase over the next decade, due to the nascent LNG industry in B.C.

“In all three scenarios, we expect an increase in gas production until 2029, due to the gas needed to feed the LNG projects,” CERI predicts. 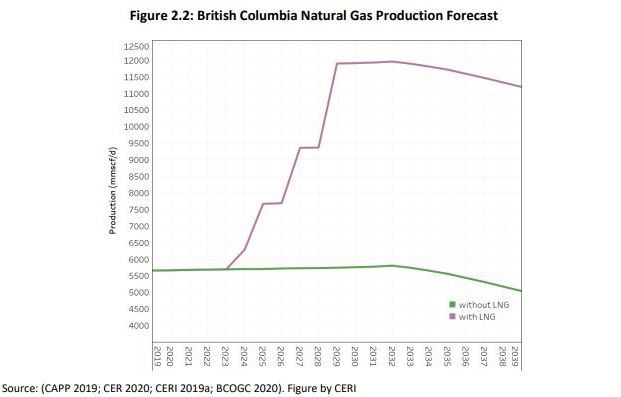 If all proposed LNG projects were to be built, CERI predicts natural gas production in B.C. would soar. | CERI

It should be noted, however, that CERI is basing its estimates for natural gas production in B.C. on LNG projects that by no means are guaranteed to proceed. It includes four projects being built over the next decade, but only one – LNG Canada – is actually under construction.

The others -- Woodfibre LNG, Kitimat LNG and the Alberta-Nova Scotia Golboro LNG projects – have yet to be sanctioned.

With those projects going ahead, CERI projects natural gas production in B.C. will soar spectacularly, staring in 2023. Without an LNG industry, it projects a relative steady-state production level for the next decade, followed by a steady decline starting around 2032.