By Glen Korstrom | August 26, 2020, 8:08am
Shape Properties is about half way through building four towers with 1,500 homes on parking lots next to its Lougheed Town Centre | Chung Chow

2020 has been a rough year for B.C. shopping centres. Most were at least partially shut for part of the first six months of the year as COVID-19-related restrictions forced store closures.

Mall executives say traffic has climbed since sites started to reopen in May, and that if they have not already welcomed new tenants, they are in talks to fill spaces that weak tenants have abandoned.

Challenges remain, however, for even the most productive sites, prompting executives to push ahead with longtime plans for reinventing their real estate and introducing new concepts as well as redevelopment.

Shape, for example, recently completed building two 60-storey residential towers with about 1,000 new homes at the Burnaby mall that it rebranded several years ago as the Amazing Brentwood.

“It is amazing,” Shape’s executive vice-president Darren Kwiatkowski said when queried about whether this was actually the mall’s name. “It is world class. It’s like nothing you’ll see in Canada.”

The mall has a mix of dining, shopping and service businesses, with patio tables that dot entrances to plazas, while concerts, markets and celebrations are expected to be held when pandemic restrictions allow.

It is the real estate, however, that is a particular draw.

A third tower, with about 500 homes, is under construction, Kwiatkowski said. 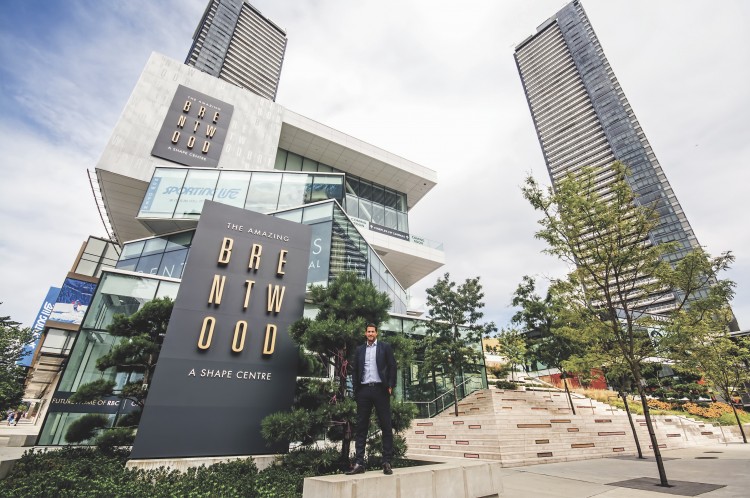 Condominium residents will be able to walk to the mall for all their necessities, while others can take advantage of free parking and the nearby SkyTrain Millennium Line.

Shape, which owns Highstreet Shopping Centre in Abbotsford, has one other large Metro Vancouver mall: Lougheed Town Centre, where even more redevelopment is taking place.

Four residential towers with a total of about 1,500 homes are approximately two years into a four-year construction timeline, Kwiatkowski said.

A July 31 Statistics Canada report singled out Oakridge when it said, “B.C. posted its third largest value on record for residential [building] permits in June, up 20.4% to $1.3 billion due to large projects such as the Oakridge Centre redevelopment.”

Much of Oakridge resembles a construction zone, and QuadReal’s plan is to have 10 towers that contain about 2,000 condominiums and 580 homes that are either market-rental or subsidized dwellings.

Meanwhile, Cadillac Fairview has started redeveloping space at CF Pacific Centre, at the northeast corner of West Georgia and Howe streets, where a glass atrium has stood for decades.

One of the worst kept secrets in Vancouver’s retail scene is that Apple Inc. (Nasdaq:AAPL) plans to lease much of that redeveloped space to build a flagship store, although neither Apple nor Cadillac Fairview has officially confirmed those plans.

The mall owner has not said what it will do with space in the empty former Four Seasons Hotel on Howe Street.

Retail Insider Media owner and analyst Craig Patterson told BIV that while CF Pacific Centre has a strong tenant mix that will attract shoppers, it may suffer a hit to its business from the COVID-19 pandemic.

A shift toward working from home will reduce the number of nearby office workers in downtown Vancouver, and general reluctance from commuters to get on rapid transit could dampen foot traffic. There will likely be fewer tourists coming to B.C. in the short term, and Patterson said another challenge for CF Pacific Centre is that it does not offer free parking.

While department store giants such as Neiman Marcus, JCPenny and Nordstrom have been closing locations in the U.S., Patterson said the Nordstrom location in Vancouver should be safe because it is one of the chain’s best performing stores.

The fallout from Sears Canada’s staggered march into creditor protection included local stores closing in 2015 at Richmond Centre and in 2017 at Metropolis at Metrotown and at Brentwood Town Centre.

The closures hit mall owners, but were not a serious blow.

Cadillac Fairview’s senior vice-president and portfolio manager for Western Canada, Tom Knoepfel, told BIV earlier this year that his company bought out Sears Canada’s lease on 110,000 square feet at Richmond Centre before the chain’s demise so Cadillac Fairview could better envision how to transform the space.

“Our strategic focus has been on densifying the site, and as a result the plan is to add about 2,200 residential units to the property,” he said.

“We’ve intentionally kept that [space] vacant in order to do our planning for the redevelopment of the south end of Richmond Centre.”

Ultimately, he said, the former Sears space in that mall will be torn down to accommodate residential units as well as stores.