Record-setting year for birth tourism in B.C. prior to pandemic

Federal Liberal government appears to have made no progress to better understand and address birth tourism, but COVID-19 is temporarily curbing the practice

By Graeme Wood | August 27, 2020, 1:11pm
Richmond Hospital birth centre. 502 births to non-residents took place at Richmond General Hospital last year, representing 24% of the 2,094 total newborns at that hospital. That is the highest total and share of non-resident births at a hospital across Canada | Photo: Graeme Wood.

It was another record year for birth tourism in B.C., according to new data released by health officials.

The province saw a 21.9% spike in non-resident births between April 1, 2019 and March 31, 2020, as 868 non-residents of Canada – the vast majority of whom are understood to be Chinese nationals on tourist visas – paid to give birth in local hospitals in order to garner automatic citizenship for their newborns. The prior year, 712 non-residents gave birth in B.C.

“Vancouver area hospitals continue to have the largest percentages of non-resident births, with an active cottage industry supporting women coming to give birth from China,” said researcher Andrew Griffiths, who first reported the new annual data from the Canadian Institute for Health Information.

Those 502 newborns represent 24% of the 2,094 total newborns at Richmond General Hospital. That is the highest total and share of non-resident births at a hospital across Canada. Meanwhile, Vancouver’s St.Paul’s Hospital is second in the nation, with 14.1% of all births being to non-residents. There, 203 babies were born to non-residents.

B.C. figures do not include international students, who are enrolled in the public healthcare system. As such, Griffiths said B.C.’s figures are a more accurate indication of birth tourism (those non-residents who fly to Canada for the explicit purpose of obtaining citizenship for their newborns).

Griffiths, a former director general of the Citizenship and Multiculturalism Branch, Department of Citizenship and Immigration, said he estimates about half of the non-resident births outside of B.C. to be tied to parents on tourist visas. However there is no reportable data along those lines, as a federal review of the issue, first announced in November 2018, appears stalled. 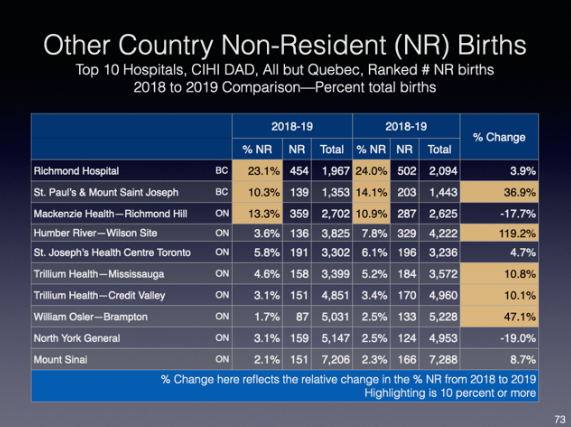 Glacier Media requested information on non-resident births tied to patients on tourist visas but Vancouver Coastal Health Authority said such data does not exist and the task to obtain it from paperwork would be too onerous – although such data is what the federal government stated it would acquire in its review.

Canada is one of two Western countries, along with the United States, to offer birthright citizenship – a concept also known as jus soli – meaning babies born to two foreign nationals on tourist visas are granted automatic citizenship.

It remains unclear exactly what the federal government is doing to enact policies to curb the practice. To date, no enforcement measures have been announced, unlike in the U.S., which has convicted “baby house” operators of money laundering and fraud in 2019.

The U.S. State Department further cracked down on birth tourism in January, with a new rule that “travel to the United States with the primary purpose of obtaining U.S. citizenship for a child by giving birth in the United States is an impermissible basis” for a tourist visa.

The lack of action to address birth tourism, which is widely perceived by the public as an abuse of Canada’s immigration system, has frustrated Richmond community activist Kerry Starchuk, who has documented dozens of “baby houses” in the Vancouver suburb offering accommodation and doula services for Chinese nationals, who typically arrive three to four months prior to giving birth on a six-month or extended tourist visa.

“It’s a joke. It’s so blatant you can see it. They’re advertising this in China,” said Starchuk.

In a written response to Starchuk, dated July 8, 2020, Immigration, Refugees and Citizenship Canada (IRCC) said it was “aware of the increase in births by non-residents in Canada.”

IRCC said, “While statistics indicate that birth tourism is not widespread, IRCC is researching the extent of this practice, including how many of the non-residents are short term visitors.”

Birth tourism is technically legal in Canada, in so much that nothing bars a pregnant woman from entering Canada to give birth, so long as they are honest with border agents.

“Providing false information or documents when dealing with IRCC is considered misrepresentation and has immigration consequences.  However, non-residents giving birth in Canada is not considered fraud under the Citizenship Act,” stated IRCC.

“Additionally, under the Immigration and Refugee Protection Act, a persons are not inadmissible nor can they be denied a visa solely on the grounds that they are pregnant or that they may give birth in Canada,” wrote IRCC.

Starchuk said the federal Liberal government has dragged its feet on the matter.

“I’m not interested in writing any more letters. I want action,” she said. 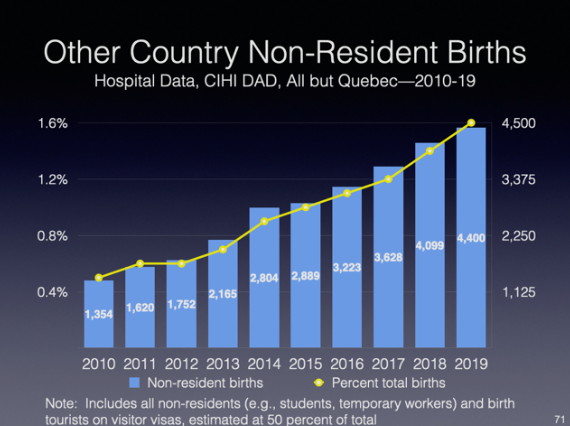 Non-resident births in Canada by year. Figure by Andrew Griffiths

Richmond Conservative Members of Parliament Kenny Chiu and Alice Wong have proposed a hybrid jus soli policy that would bar those on tourist visas from obtaining citizenship for their newborns. Newborns of non-resident international students, for instance, would continue to obtain citizenship under their proposal.

Griffiths said birth tourism businesses in Richmond are at a stand still with COVID-19 flight restrictions and visitor visas from China down 72.2% between January and March, and down 99.79% by June.

A poll from Research Co. in February, 2019 showed almost three in four (73%) believe it is time to end automatic citizenship for people born in Canada (adopting rules used by most Western countries). An Angus Reid poll in March, 2019 showed 60% of Canadians want the law changed.

Immigration Minister Marco E.L. Mendicino declined to be interviewed on this matter.