Around 1 a.m. on August 4, 2014, a worker withdrawing water from the Mount Polley tailings pond dam was puzzled when he noticed he suddenly had no water. He would not know until later that, at the other end of the 250-hectare dam, a portion of the north-facing embankment had collapsed, sending a torrent of 25 million cubic metres of water and mine slurry into Polley Lake, Hazeltine Creek and Quesnel Lake.

The force of the deluge took out two bridges and obliterated Hazeltine Creek. Had the worker been on the north-facing berm at the time, he would almost certainly have been swept to his death.

Fortunately, no one was killed or injured in the disaster, and fortunately for the fish of Polley and Quesnel lakes, the geochemistry of Mount Polley is such that the 13.8 million cubic metres of slurry (finely ground waste rock) that flowed into Hazeltine Creek and Quesnel Lake contained relatively low levels of the metals and minerals that can harm fish and other aquatic animals.

The damage was largely physical. The torrent of water and mine slurry ripped out thousands of trees and erased the nine-kilometre long Hazeltine Creek.

BIV recently toured Mount Polley and Hazeltine Creek to document the progress made on the environmental rehabilitation efforts. 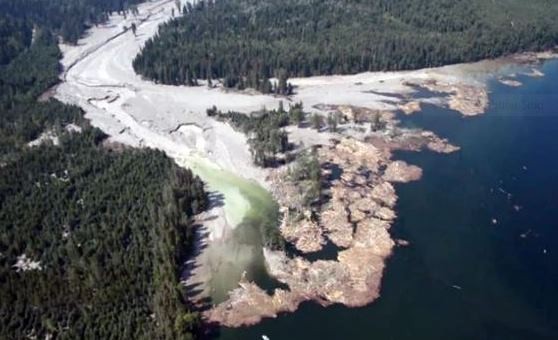 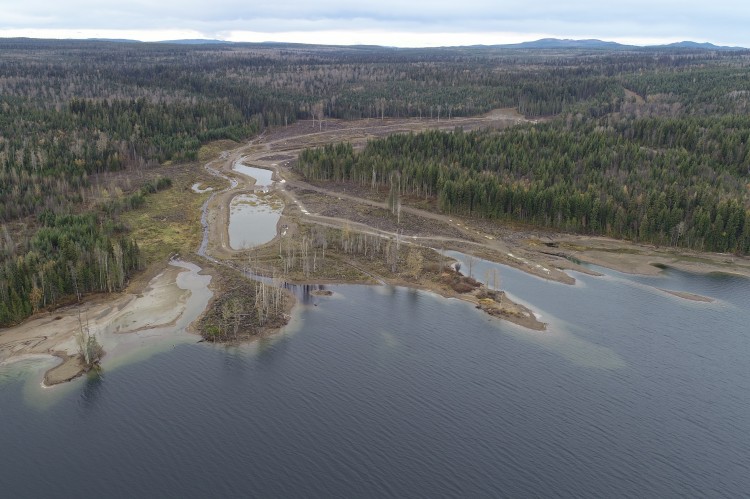 When Imperial Metals (TSX:III) invites the public on site tours to see the restoration of  Hazeltine Creek near its Mount Polley copper-gold mine, some visitors ask why so many dead trees appear to have been left in and around the creek. It looks careless.

And lower down, near the mouth of an estuary that flows into Quesnel Lake, they express amazement at the upside down trees, their roots sticking up like weird mushrooms.

But those upside down trees weren’t driven into the ground by the force of the deluge; they were driven in by work crews on the advice of one of the many environmental consultants involved in Mount Polley remediation. The idea is to create nesting habitat for birds.

As for those dead trees lying in and around the creek, they too were placed there – bolted to rocks to keep them in place. The idea there is to create shade and shelter for juvenile trout. 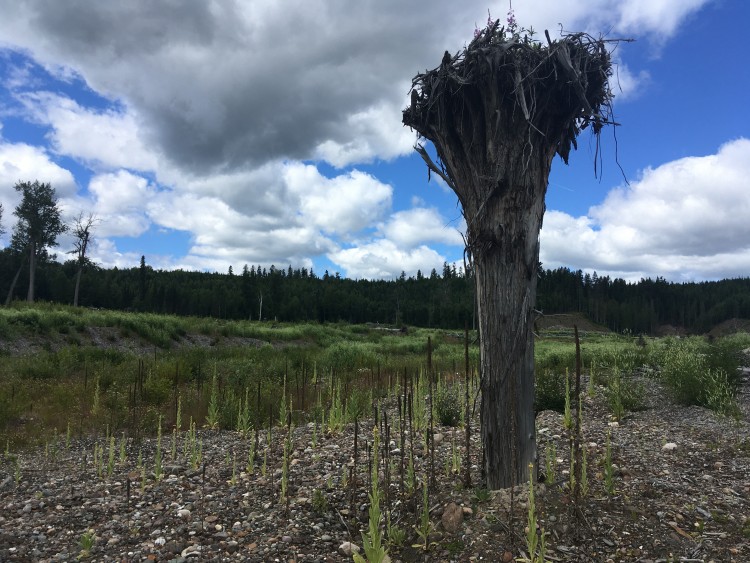 Hazeltine Creek today is a scar that is still healing. On either side are open areas, once forested, that are still barren of trees. But the creek teems with juvenile trout.

“The creek is back and the fish are surviving, and we’re discharging clean, highly regulated water deep into Quesnel Lake,” Imperial Metals CEO Brian Kynoch said during a tour of Mount Polley and Hazeltine Creek.

Concerns remain, however, about the longer-term impact of slurry that carpeted the bottom of Quesnel Lake’s west arm. Dredging the lake has been dismissed as potentially more damaging than letting nature take its course.

On the upper banks of two canyons, trees that survived the flood bear marks indicating just how high the water rose when it hit the canyon walls and backed up at choke points.

Most of the remediation work that has been done since 2014 has been in rebuilding Hazeltine Creek, which runs nine kilometres from Polley Lake to Quesnel Lake, both of which support trout and salmon.

It was a massive effort requiring an army of environmental consultants, engineers, and earth movers.

Immediately after the tailings pond collapse, Quesnel Lake’s west arm became turbid with silt, which can damage fish health, so one of Imperial’s first priorities was to reduce the silt flowing into Quesnel Lake.

The first task was to build a weir at the outlet of Polley Lake to stop the water’s flow and allow crews to begin removing dead trees. 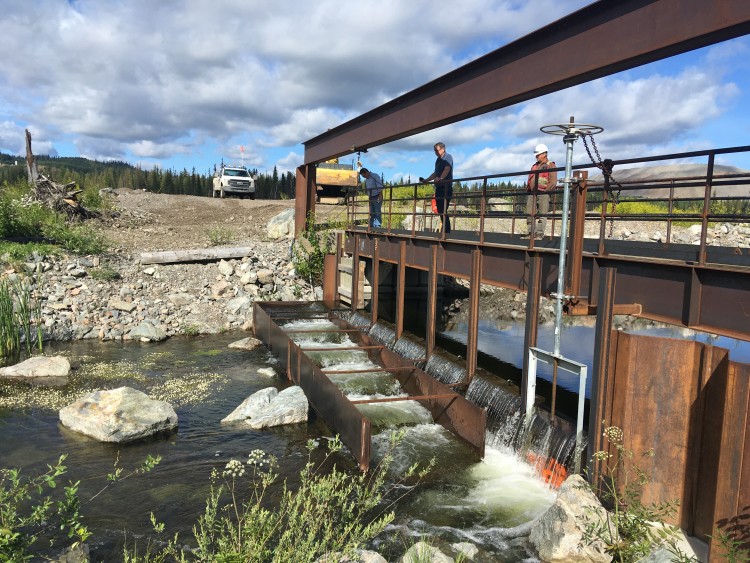 About 28 40-tonne loads of slurry were scooped up and hauled out of the creek’s valley, which required the construction of some new access roads. Roughly 40,000 loads of rock were then brought in to rebuild the creek channel.

A number of settling ponds were created and a total of 600,000 trees and shrubs have been planted along the shoreline.

But it will take years for them to mature and provide natural cover, so in the meantime, a pipe was built to bring cold water from Polley Lake into Hazeltine Creek when water temperatures get too high, something that can stress fish. 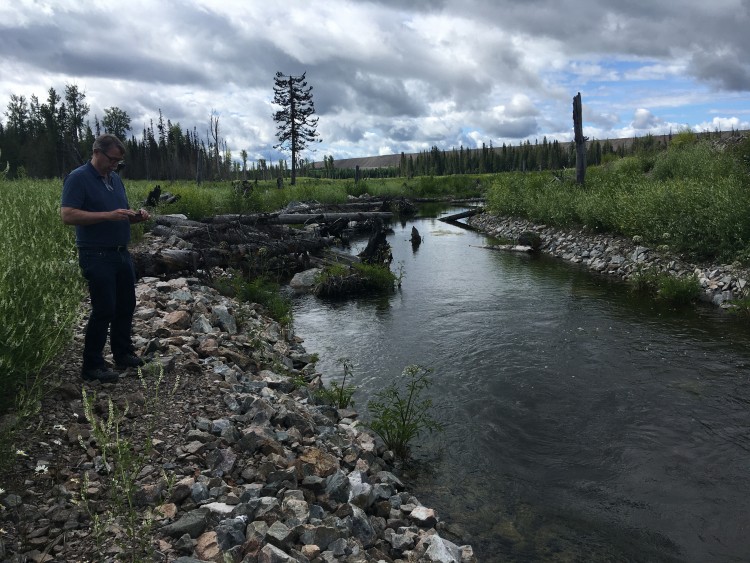 Much has been written about the “toxic tailings” that washed into Quesnel Lake. But Mount Polley’s geochemistry contains relatively low levels of dissolvable metals and minerals that are toxic to aquatic life.

“Unlike a lot of other copper-gold deposits, it doesn’t have very much iron sulphide …which is often the mineral that causes the problems of acid rock drainage,” said Lyn Anglin, a geologist who was the head of Geoscience BC before Imperial Metals hired her on as chief science officer following the tailings pond collapse.

“What we know about the tailings is, because they’re not acid-generating, any of the tailings that were deposited at surface are not likely to start dissolving in the surface environment,” Anglin said. “They’re even a little bit alkaline, so they don’t readily give up metals.”

One of the biggest concerns for the aquatic environment is dissolved copper.

“At Mount Polley, very little dissolved copper comes off those tailings,” Anglin said. “In fact, I would say that the studies that we did, and that they are continuing to do, showed that metals are not leaching [out of those tailings at the bottom of Quesnel Lake]. So they’re sitting down there being very benign.”

The bigger concern with all that slurry was the fact that it was sterile, according to Katie McMahen, who worked as an environmental consultant for Imperial Metals when the tailings pond collapsed, and was involved in some of the initial environmental remediation.

“You hear over and over again about the toxic tailings,” said McMahen. “And certainly some tailings can be toxic, but not all of them. The work that’s been done has really shown that the risk of toxicity from the tailings at Mount Polley are really low. It’s the physical disturbance that really needs to be rehabilitated.”

McMahen no longer works for Imperial Metals. She is now doing a PhD at the University of British Columbia’s Faculty of Forestry. The focus of her PhD thesis is the environmental remediation that was done at Mount Polley and the implications of introducing large volumes of sterile slurry into the environment.

Soil and sediment in and around rivers and lakes are full of organisms, whereas mine slurry is sterile. McMahen studied the implication of having so much sterile material blanketing organic soils and sediments and how to accelerate organic growth in it.

“If you just sample the total metal content of the tailings, it is elevated compared to background, but we’re not seeing that move into the food chain, which is good,” McMahen said.

“The tailings that were spilled, it’s not really a toxicological concern. The bigger concern is just that it’s a big disturbance on the landscape. And the tailings themselves … don’t have organic matter in them. They’re low in nutrients. They don’t have a lot of the properties that we look for in a good soil.”

It may take years for the slurry that flowed into Quesnel Lake to settle down. An independent academic study published in June says turbidity in Quesnel Lake recurs seasonally when the lake turns over each spring and fall.

“Each year since the spill, the turbidity of the lake has increased in spring and autumn during turnover, apparently due to re-suspension of spill material off the lake bottom driven by basin-scale wave oscillations,” the study published in Water Resources Research concluded.

“This process, and the ongoing discharge of excess mine waste water directly into the lake, raises concerns over the seasonal mobilization of mine contaminants and their impact on aquatic ecosystems.”

While the bulk of Hazeltine’s rehabilitation is done, there is still about 500 metres of restoration work to do at its end and about 300 metres on Edney Creek, which joins Hazeltine just before they empty into the west arm of Quesnel Lake. The company hopes to have that work done by the end of this year.

Meanwhile, concerns persist among local residents about the continued discharge of “mine waste” into Quesnel Lake.

That waste is water, which has been filtered, the company says. The mine has been shut down since May 2019, so there’s no mine waste being produced now, just water accumulating from rainfall and meltwater.

Following the collapse of the tailings pond dam and its reconstruction, Imperial Metals received a water discharge permit from the Ministry of Environment to pipe treated water from the mine site into Quesnel Lake. It now discharges about six million cubic metres of filtered water into Quesnel Lake yearly.

Following the dam collapse, Imperial Metals had a new water filtration plant built. Mostly, it removes any suspended solids before discharging water into Quesnel Lake via an outfall. The plant has chemicals on hand that can be used to neutralize any high concentrations of minerals and metals, but so far it has not had to use them. The water is tested before being discharged and must meet provincial water quality standards. 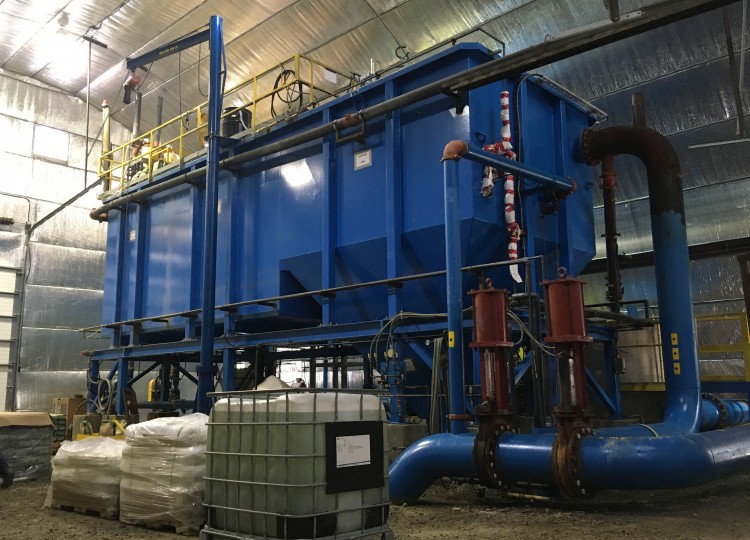 According to Imperial Metals, about 1,116 water and soil, 234 lake and 77 groundwater samples were taken last year.

“The underlying principle at Mount Polley is that the water there has never failed a sensitive aquatic toxicity test,” Anglin said.

As for Quesnel Lake, turbidity remains the main concern is. Testing thus far has shown low levels of toxicity in fish, and a fish tagging program that had been implemented in 2013 indicated no fish mortality.

“Over 100 toxicity tests were done,” said Lee Nikl, senior environmental scientist with Golder Associates, the engineering firm brought in to manage the environmental remediation. “We did not find toxicity.”

Despite those kinds of assurances from the company and the Ministry of Environment, Christine McLean of the Concerned Citizens of Quesnel Lake is opposed to the ongoing discharge of water from the mine site into Quesnel Lake and is appealing the 2017 water discharge permit issued by the province.

She said the water filtration plant is not sufficient and wants all water discharges into Quesnel Lake halted until the company implements some form of enhanced treatment to remove any metals like copper from the water.

“They need to spend some money and energy trying to figure out how to clean their water,” McLean said.

Editor’s note: Imperial Metals defrayed the cost of two nights’ accommodation for BIV’s reporter during the writing of this story.