Wineries on the Skaha Bench in the Okanagan Valley have reopened following temporary closures exacted by the Christie Mountain fire, which in the past week has raged within one kilometre of vineyards.

Blasted Church Vineyards was the only winery that authorities ordered to be evacuated. That order forced owner Evelyn Campbell to flee and stay with friends, starting on August 18.

She told BIV that she also paid part of the cost to have her four Mexican temporary foreign workers stay at a motel in Okanagan Falls. A government emergency program covered the bulk of those hotel costs, she said.

Authorities allowed Campbell to return to her winery on August 25, and she reopened the facility with staff on August 26.

Campbell said she will not know until her team produces her wine whether products have smoke taint – a condition that occurs when particles in smoke settle on grape skins, creating an unpleasant taste in wine made from the grapes

John Skinner, who owns nearby winery Painted Rock Estate Winery, voluntarily closed his winery last week and has since reopened.

He said he believes his grapes will be spared smoke taint because he left sufficient leaf cover to shield grape clusters, and because wind blew smoke away from his vineyards.

Campbell described how the evacuation has wreaked an emotional toll.

“Never in the 18 years I’ve been here has the operation shut down for more than one day – Christmas Day – each year,” she said.

“To not have access to my property for a whole week was pretty devastating. There was loss of income, and salaries that need to be paid. There’s business-continuity insurance that may need to be looked at.”

Campbell lives in a home amid her 40-acre vineyard, where her team has planted 10 different grape varieties. The grape harvest is not set to start until October, when Campbell’s team is scheduled to produce about 28,000 cases of wine.

In a normal year, she said, about 20% of that volume is sold on-site, which is the most lucrative sales channel for wineries because the B.C. government levies less tax on those sales.

This year, despite being closed for much of March, April and May, Blasted Church’s on-site sales are slightly higher than last year even as overall sales are down because of reduced sales to restaurants. Wine tourists are coming, she said, adding that they are buying more per-visit than in past years.

One thing that may be drawing more wine tourists is that the B.C. government has authorized the Skaha Bench region as one of B.C.’s five wine sub-appellations. That means that winemakers in the area can put the words “Skaha Bench” on front labels of wine bottles. The other sub-appellations are: Golden Mile Bench, Naramata Bench, Okanagan Falls and, as of last month, Cowichan Valley.

“Surprisingly, there were people trying to get up the road past security before I even arrived,” she said of some tourists, while helicopters hovered above. 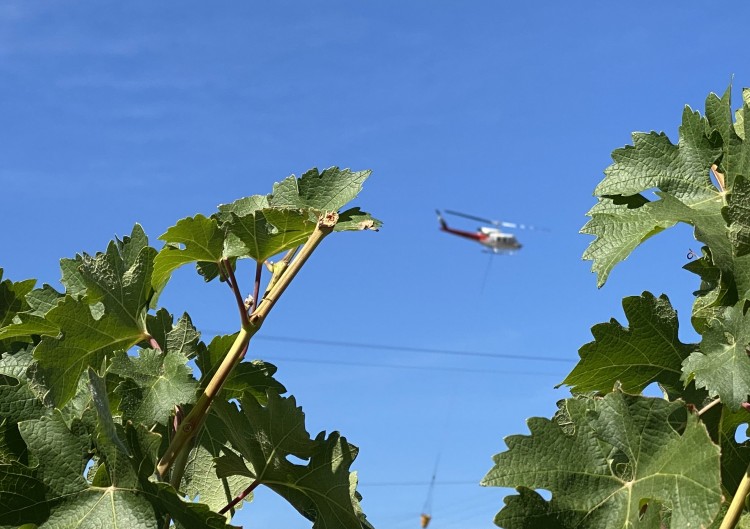 Campbell and Skinner praised the skill and dedication of the crews fighting the fires.

“The abilities of these helicopter pilots has been shockingly effective,” Skinner told BIV August 25. “They saved us. It was very emotional the first night because I thought we were going to be wiped out.”

He explained how spotter helicopters fly at high elevations, with pilots communicating with counterparts in choppers equipped with buckets, which can be filled with water from nearby Skaha Lake and dumped on flare-ups.

“At one point you couldn’t count the number of hot spots, but they went through the task methodically,” Skinner said.