By Kirsten Clarke, Richmond News | September 29, 2020, 4:09pm
The BC Liberals will tackle the Massey Tunnel replacement with an “aggressive plan” to deliver “traffic sanity on Highway 99,” leader Andrew Wilkinson said during a campaign stop in Richmond | Photo: Marian Rantanen

If the BC Liberals are elected in a few weeks’ time, they will tackle the Massey Tunnel replacement saga with an “aggressive plan” to deliver “traffic sanity on Highway 99.”

That was the pledge of party leader Andrew Wilkinson, during a campaign stop Monday morning in Richmond.

Wilkinson told the Richmond News that it was unacceptable for the city “to have the biggest traffic bottleneck in western Canada.”

“We will be putting forward a plan to quickly, effectively and dramatically solve the bottleneck at the George Massey tunnel,” he said.

Wilkinson pointed out that there were already 13,000 pages of consultation and that all the necessary engineering work was done on the previous plan to replace the aging Massey Tunnel with a 10-lane bridge.

Meanwhile, Matt Pitcairn, BC Liberal candidate for Richmond-Steveston, told the News that both the project and “getting shovels on the ground” will be an “absolute priority” for the Liberals, if elected. 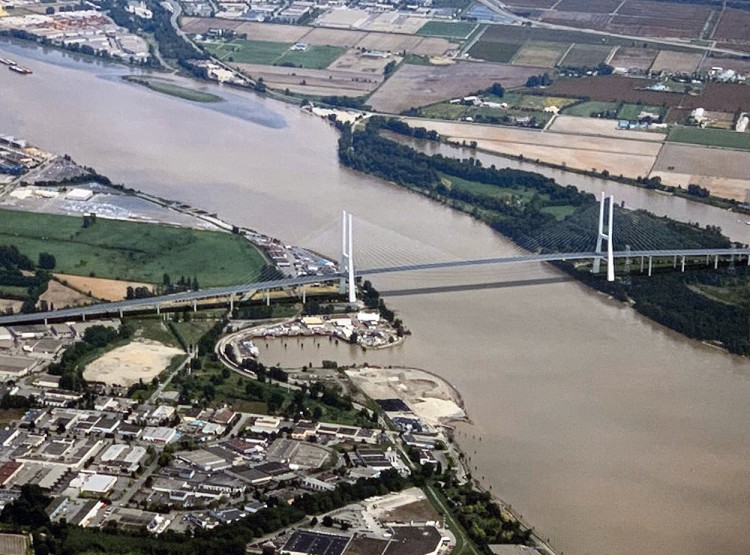 The previous BC Liberal government planned to replace the aging Massey Tunnel with a 10-lane bridge, shown here in a concept design. Submitted photo

That could mean resurrecting the “shovel-ready” bridge, he said, as that design has already gone through the environmental assessment process.

“The Liberals will get construction on this project started during the greatest economic recession of our lifetime, to get people back to work, get people and goods moving in and out of Richmond on the fastest timeline possible,” Pitcairn said.

The plan to replace the aging Massey crossing was first announced by the previous BC Liberal government in 2012, and was advanced as far as starting $70-million worth of prep work along the Fraser River.

The total project was slated to cost $3.5 billion. However, the BC NDP said during the 2017 election campaign that leaked documents showed the total cost could be nearer $12 billion.

The NDP put a halt to the project shortly after coming to power in 2017, and went back to the drawing board after a third-party review found the 10-lane bridge was greater than what the region needed.

The review also recommended that the new crossing should respect the need to maintain agricultural and park lands.

Last fall, Metro Vancouver’s board of directors endorsed an eight-lane immersed tube tunnel option for the new crossing. The province was also considering a second short-listed option, an eight-lane bridge.

A business case, with the chosen option, was expected to be announced this fall. Meanwhile, the BC Liberals have claimed the 10-lane bridge would be three-quarters built by now.

The region can’t wait 10 years for a new tunnel, said Pitcairn, with the Steveston Highway and No. 5 Road area already heavily congested from 3 p.m. onwards, and commuters often backed up to Shell Road waiting to get into the Massey Tunnel.

Businesses are already relocating because of the traffic congestion, Pitcairn said, something that would no doubt continue the longer the region waits for a replacement.

Because of that, Pitcairn said he didn’t think it would be wise for the Liberals, if elected, to scrap their plan for a bridge and go back to the drawing board.

“That would mean further delays,” he said. “I mean, a lot of work and hundreds of millions of dollars were spent on a previous project, and it is approved. So amendments could be made to that application, if and when we proceed with a bridge.” 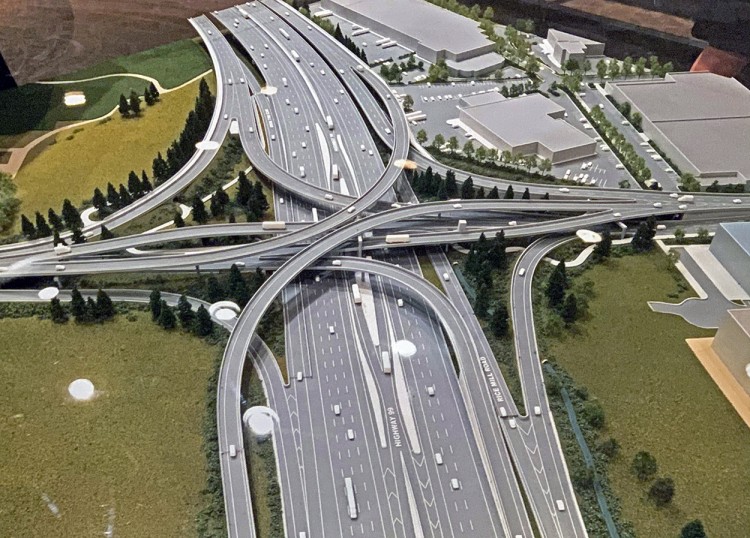 Concept design of the Steveston interchange for the 10-lane bridge, proposed by the previous BC Liberal government. Submitted photo

Richmond Mayor Malcolm Brodie is firmly against the 10-lane bridge, and said it would fundamentally change the area around Steveston Highway and Highway 99.

“You only have to look at the Steveston interchange, to realize the gravity of it,” he said. “It is three levels high, and as you lead up to the bridge, from north going south…there’s something like 20 lanes of highway traffic.”

The plan included building a large cloverleaf, and the city had expressed concern about the infrastructure encroaching into parkland and the ALR.

“It would be a dramatic shift… The incline, going up to the bridge, would start north of the Steveston Highway overpass,” Brodie said.

He said that while the city recognizes the tunnel “is a big area of congestion,” and solutions are needed, those solutions need to be found in conjunction with local government.

“That’s where the previous Liberal government definitely failed,” he said, explaining that Richmond was never properly consulted about the 10-lane bridge, and had always voiced opposition to the plan, along with Metro Vancouver.

When Wilkinson was asked about criticism from the City of Richmond about lack of consultation, he said that “transportation planning is always complicated.”

“Cities obviously need to be involved in that, and we’ll obviously be working with the City of Richmond because we’ll be making a very prompt and effective decision on how to deal with the bottleneck rather than just telling people to sit in traffic like the NDP.”

Brodie, however, said he wondered why the Liberals kept pushing the bridge.