Grants for small and medium-sized businesses, a taskforce dedicated to reviving B.C.’s ailing tourism sector and funding aimed at boosting a workforce rattled by record job losses are among the B.C. government's top priorities according to its economic recovery plan, released September 17.

While the plan includes $1.5 billion in new spending, the government is also introducing $660 million in new tax incentives and $500 million for a new strategic investment fund.

The province unveiled its plan amid speculation Premier John Horgan, who is currently enjoying high approval ratings amid the pandemic, is eager to call a fall election.

"I've not made a decision about an election," Horgan said at the unveiling, adding he's focused on launching the recovery plan.

The money, he said, could flow right away. He added that government ministers need not be involved in coordinating the spending because that work will be done by the civil service – essentially opening the doors to an election. When asked directly if he would hold an election in the near future, Horgan said, "I have not made a decision."

Among the province's big direct-spending priorities is a $300-million recovery grant for small and medium-sized businesses that includes what it describes as an “enhanced amount for tourism operators.”

A separate $50 million is being allocated to a new tourism taskforce charged with boosting an industry hit harder than most by travel restrictions.

That particular funding is expected to roll out this year and is part of $100 million being earmarked specifically for the tourism sector, with grants for local governments and tourism development initiatives also on the table.

The tourism industry had been seeking $680 million in support.

"We appreciate the funding announcement and assembly of the task force," Science World CEO Tracy Redies told BIV after the province's announcement.

"It’s much less than the tourism industry needs to recover, but it’s a start. Science World cannot wait much longer to receive government funding as the results of shutting down and low visitor attendance have already had serious, negative impacts on our organization."

Redies told BIV in an article published this morning that if her organization does not get government support, it could close at least temporarily.

Tourism Industry Association of British Columbia CEO Walt Judas sounded a similar tone of appreciation while being clear that more support is needed.

“It’s a very good start," he said. "We appreciate that the province recognized the needs of the tourism and hospitality sector with specific measures to help address major challenges including liquidity. We are keen to work with government immediately to put funds into the hands of operators, who are desperately trying to keep their doors open. We are also counting on additional funding to help our industry as part of Budget 2021.”

Jeff Guignard, who is executive director of the Alliance of Beverage Licensees of British Columbia, similarlly believes much more needs to be done.

"Let's be clear," he said. "Our industry is going to need significant long-term support if we're going to survive this ongoing crisis."

Horgan acknowledged the tourism sector faces an uphill battle despite the additional support from the province.

"We put in place programs that will help get them through the next short while, we will continue to work with them through the taskforce to make sure that we've got Budget 2021 locked down to continue to assess until we can find a time where we can welcome people from around the world to come back to British Columbia, enjoy the many attractions and destinations that we have here," he said.

Muriel Protzer, senior policy analyst for B.C. at the Canadian Federation of Independent Business (CFIB) said "CFIB is very concerned that these [spending announcements] will not likely have an immediate impact on the ground, and an immediate impact is really what we need right here."

The Business Council of British Columbia (BCBC) submitted to the province in July two-dozen recommendations aimed at spurring economic growth during the pandemic.

The ideas included reducing the provincial sales tax (PST) to help households and small retailers, ramping up infrastructure spending for ready-to-go projects, such as the SkyTrain extension to UBC, and reworking municipal structures to expedite permitting.

Greg D'Avignon, BCBC's CEO, said he is pleased that the government took some of his advice, and that he is encouraged by some of the short-term actions announced today, but he said the plan lacks longer-term, non-monetary strategies, such as cutting red tape, which is needed for a strong future recovery.

“There’s no talk about the non-monetary things they could be doing … around how do we get the big GDP drivers in the economy up and running," he said.

What is needed, D'Avignon added, is “to unshackle the balance sheets of the private sector and create investment certainty and regulatory efficiency going forward.”

The government response to business seems to be that there will be more help on the horizon.

"It's a very comprehensive approach with more to come," B.C. Finance Minister Carole James said during the media briefing, adding British Columbians should expect more support for the industry to come in the 2021 budget.

One part of it is that the government is allocating $300 million to create jobs in the province’s healthcare sector – 5,800 more positions, ranging from support staff at long-term care facilities to contact tracers.

Another $660 million in new tax incentives come on top of the $1.5 billion in direct spending, including $470 million in new PST rebates on business investments in machinery and equipment.

The province estimates 110,000 businesses are eligible for the rebates, and it hopes that the tax savings will encourage expansion as business owners invest significant sums in new machinery.

The remaining $190 million of the new tax measures will fund a 15% tax credit for employers who expand their eligible payrolls through the last half of 2020.

The $500-million strategic investment fund will be managed by an independent third party, not yet named, with the goal of boosting West Coast businesses with high-growth potential.

Another $35 million is earmarked for the Centre for Innovation and Clean Energy, $31 million for an electric vehicle incentive program and $30 million to the commercial vehicle innovation challenge.

The recovery plan comes amid estimates from Victoria the provincial economy is set to contract 6.7% this year before expanding by 3% in 2021.

The BC Liberal leader Andrew Wilkinson said the plan was "too little too late," and "quite a disappointment," particularly for those in the tourism and hospitality sectors. The government, Wilkinson said, was not providing enough support for many tourism businesses to survive.

"These people's backs are up against the wall. Their lives are being critically endangered in terms of their ability to survive as a business and the government has actually failed them badly with a plan that says unless you're about on death's door as a business... we won't give you a nickel." 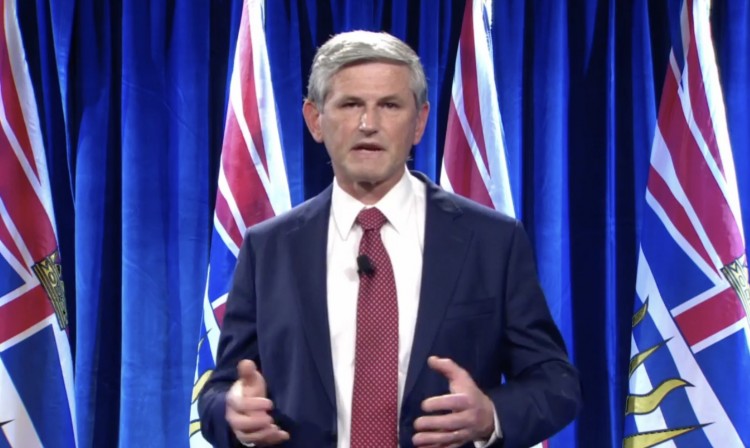 The BC Green Caucus consulted with the government on this plan under its confidence and supply agreement – the document in which it agreed to support the BC New Democratic Party (NDP) in a minority government. It, the NDP and the BC Liberals unanimously approved the $1.5 billion in new spending in the legislature.

That does not mean that the Greens liked the plan revealed today.

"There is more work to do to connect these short-term supports with a long-term sustainable recovery plan,” said the Greens' leader, Sonia Furstenau.

“Ultimately, this plan lacks imagination about what’s possible and what’s necessary at this moment in our history," she said. "We can dream bigger. We can strive to put every young person who needs a job to work restoring and healing our natural environment, begin a mass building retrofit campaign to create jobs in every community, and create a just transition for workers in dying industries."

The B.C. Chamber of Commerce offered 54 recommendations to government, imploring the province to create a value-added tax – similar to the short-lived and hotly contested harmonized sales tax – and mitigate the impacts of the employers’ health tax.

And earlier this month the Greater Vancouver Board of Trade (GVBOT) presented its own economic recovery plan to the province.

It urged the province to take a "science-based approach to travel restrictions," and fund marketing campaigns to encourage tourism.

The GVBOT also wants the government to offer longer tax deferrals on remittances, launch a working capital grant program for small businesses, cut down on "cumbersome" and "outdated" regulations, boost childcare support and invest in other major infrastructure projects throughout the region, including the above-mentioned SkyTrain extension and the gondola up Burnaby Mountain to the main campus of Simon Fraser University.

Its CEO, Bridgitte Anderson, said she was pleased to see many GVBOT recommendations in the province's economic recovery plan,"especially the PST rebate on machinery and equipment."

She added: "We are also pleased to see continued investments in broadband infrastructure, health and child care, alongside investments to help businesses anchor talent and IP here in B.C. We eagerly await additional details on how [small and medium enterprises] will be able to access the new payroll tax credit and Small Business Recovery Grant, as well as who will be eligible to access them. These decisions will be vital to ensure that funds flow quickly to businesses who need immediate support to survive."