Pandemic recovery measures may not save B.C.’s most vulnerable sectors, critics fear

By Nelson Bennett | September 21, 2020
B.C. business leaders praised elements of the B.C. government’s economic recovery plan, but some said it fails to seriously address the long-term fallout from the pandemic  | fotografiabasica/Getty images

The John Horgan government last week announced the details of a $1.5 billion economic recovery plan for B.C. that delivered on some of the spending and tax breaks B.C. business groups had asked for.

But it fell far short of the aid called for by the B.C. tourism industry, and makes no commitments to fast-tracking big infrastructure projects or cutting red tape, both of which were asked for by business groups.

“CFIB is very concerned that these will not likely have an immediate impact on the ground, and an immediate impact is really what we need right here,” said Muriel Protzer, senior policy analyst for B.C. at the Canadian Federation of Independent Business (CFIB). “Business is still nowhere near as-usual.”

“We’re pleased that the government has taken some of our advice … and we’re encouraged by some of the short-term actions that they’ve announced today,” said Greg D’Avignon, CEO of the Business Council of BC (BCBC).

But he said the plan lacks non-monetary strategies for positioning B.C. for longer term recovery.

“There’s no talk about the non-monetary things they could be doing … around how do we get the big GDP [gross domestic product] drivers in the economy up and running,” D’Avignon said.

Missing from the plan, he said, is a strategy to “unshackle the balance sheets of the private sector and create investment certainty and regulatory efficiency going forward.”

Earlier this year the B.C. government approved $5 billion in emergency spending to support people and businesses affected by the pandemic lockdown. It included $1.5 billion set aside for economic recovery, the details of which were announced last week.

Recovery spending actually exceeds $1.5 billion, if you include an additional $500 million for a new high-tech strategic investment fund, and $660 million in foregone revenue from tax breaks and incentives.

But no amount of spending or tax relief will save certain hard-hit businesses, such as nightclubs, from going under if government restrictions on indoor public gatherings and cross-border travel remain in place much longer.

Others could be doomed as well if a second wave of the COVID-19 virus results in another lockdown.

“Many smaller business will fail as restrictions will remain in place for longer than many expected,” said Werner Antweiler, an economist at the University of British Columbia’s Sauder School of Business.

“Even if a vaccine becomes available early next year, it will be months until it reaches a sufficient number of people so that herd immunity will be reached. So tax relief or subsidies can’t keep businesses alive if there is no business.”

With the prospect of a snap fall election in the wind, last week’s plan was greeted by some as an NDP re-election platform.

B.C.’s tourism industry was asking for roughly half of the $1.5 billion in economic recovery spending, arguing $680 million is needed to prevent widespread business closures and layoffs.

The Tourism Industry Association of BC wanted $475 million for a working capital grant to keep businesses solvent over an 18-month period. The industry will get about one-fifth of that: $100 million.

Separate from the $1.5 billion recovery plan spending is $1.8 billion in provincial-federal spending for municipalities and transit.

Some of the more immediate steps that business groups had been calling for – the further deferral of tax payments and tax hikes – were already granted prior to the release of the recovery plan last week.

The planned hike to the B.C. carbon tax, which was supposed to increase in April 2020, was previously deferred to April 2021, for example. The government also deferred the installment payments for the new employer health tax. 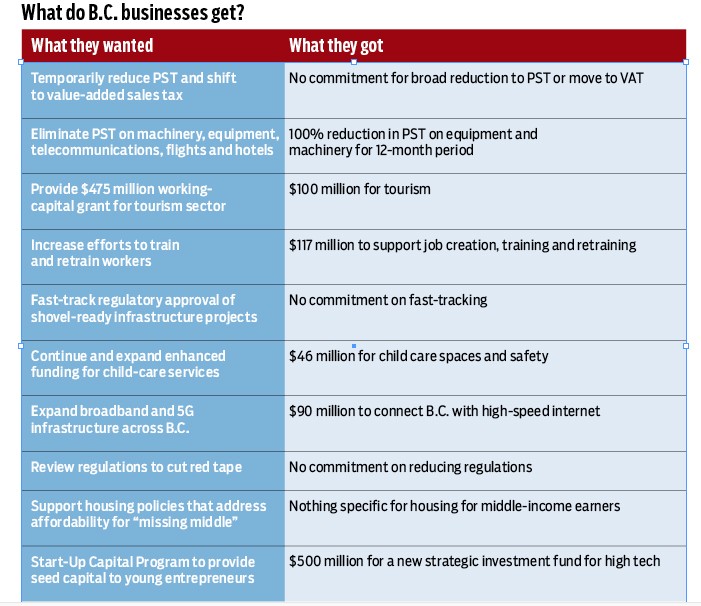 Business groups have additionally lobbied for some form of tax reform, either in the form of a move to a value-added tax, or the temporary reduction of the provincial sales tax (PST) or its elimination for certain goods and services.

At the very least, they wanted the PST eliminated on the purchase of equipment, machinery, flights and travel.

The province’s recovery plan does give temporary breaks on the PST, but makes no commitment to a value-added tax.

The government is providing $470 million in tax relief in the form of a 100% PST rebate for machinery and equipment on purchases made over the next 12 months.

The government estimates 110,000 businesses could be eligible to receive the rebate.

There is a new $300 million grant for small and medium-sized businesses to help businesses recover or transition. Businesses will be eligible for up to $30,000 in grants, or $40,000 for tourism-related businesses. To be eligible, revenues must have dropped 70% as a result of the pandemic.

That cut-off is “way too high,” Protzer said, adding that a drop of even 5% to 10% in revenue can be devastating for small business.

“We’re very concerned that the threshold is way too high.”

To promote technology and innovation, the province is creating a new $500 million strategic investment fund to support startups and help companies scale. This is not part of the $1.5 billion recovery spending, but will be in addition to it.

Greater Vancouver Board of Trade CEO Bridgitte Anderson said the plan as unveiled “represents a step” toward recovery.

“We are pleased to see many of our recommendations were included within the province’s announcement, especially the PST rebate on machinery and equipment,” Anderson said.

“We are also pleased to see continued investments in broadband infrastructure, health and child care, alongside investments to help businesses anchor talent and IP here in B.C.” •