By Glen Korstrom | September 28, 2020, 8:08am
Lisa Dominato’s motion to expand Vancouver housing options is set to be heard by council September 29 | Rob Kruyt

Vancouver’s steady shift away from single-family housing and toward multi-unit properties is likely to get support this week as city council is set to vote on a motion September 29 to have city staff examine how to densify wide swathes of the city.

Coun. Lisa Dominato’s motion to have city staff investigate “creative and experimental ground-oriented housing types” is likely to succeed, as is an expected amendment that Mayor Kennedy Stewart has said he intends to tack onto her motion.

Stewart’s amendment would direct staff to create a pilot project in which homeowners would be allowed to build up to six units on properties that now contain single-family homes.

Exceptions would be made for homes that are on the city’s heritage register.

The catch in Stewart’s proposal is that only four of the six units would be market strata units. The other two would be reserved for buyers in households that generate an annual income of between $80,000 and $120,000. Resales on those properties would come with the same requirement.

Stewart calls the proposal Making HOME (Housing Options for Middle-income Earners), and it is thus far thin on specifics. City staff are expected to work out program details and provide them to council for scrutiny, and to hear feedback before any final vote.

Making HOME would be the latest of many policies that over the past few decades have moved Vancouver away from being a city dominated by single-family homes.

University of British Columbia associate professor of sociology Nathanael Lauster, author of the 2017 book The Death and Life of the Single-Family House, found that Vancouver has shifted away from having single-family houses faster than other North American jurisdictions.

“Vancouver was dominated by single-family homes [in the 1960s], but over time it really has shifted in terms of where most people in the city live,” Lauster told BIV. “That’s been a dramatic transformation, and one that is more dramatic in Vancouver than across the rest of North America. We’ve seen that real shift over time.” 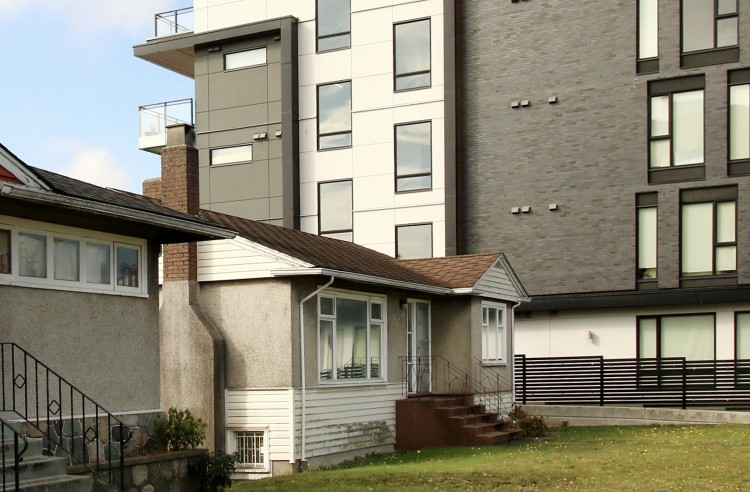 (Image: Along 41st Avenue, a half block east of Cambie Street, a single family home sits in stark contrast with its neighbour: an apartment building | Rob Kruyt)

Vancouver’s shift to multi-family dwellings arose in part because the city is constrained by mountains, ocean and the agricultural land reserve.

Vancouver city council’s votes against allowing a freeway into the city in the late 1960s and early 1970s provided some fuel for densification, Lauster said.

So did council’s vote to allow homeowners to create secondary suites.

A political decision was also made to develop industrial land. The B.C. government successfully bought, expropriated and consolidated industrial land along False Creek to host Expo 86, and post-fair it sold that land as a package to Hong Kong billionaire Li Ka-shing and partners, who created Concord Pacific Developments.

Concord Pacific paid $50 million up front and, over a 15-year term, a total of $320 million for the site. Bonuses were also to be paid to the province depending on the zoning that Vancouver city council approved.

“In terms of taking what used to be industrial land and transforming it into residential at a relatively high density,” Lauster said, “Vancouver did that a lot more effectively than most other cities across North America.”

That densification enabled people to live in an alternative to the single-family house, and it is different from development in cities such as Phoenix, Arizona, where urban sprawl happened instead, he added.

Another pivotal decision came in 2009, when council approved a pilot project to allow homeowners to build laneway houses.

In this context, Dominato’s and Stewart’s planned motion could be seen as an expected continuation of a long-term trend.

Rohana Rezel, who ran for council in 2018 and opposed council’s zoning change to allow duplexes citywide, told BIV that he does not oppose densification but that he correctly feared that new density would not bring needed affordable homes.

He pointed to one example of a property on East 58th Avenue, where a single-family home was sold in 2017 for $1.28 million, or about the same price as half of a new duplex that is now listed for sale on that land.

Rezel said Stewart’s motion should stipulate that more than two of the six future homes be for “middle-income” households.

Dominato told BIV that the inspiration for her motion is not simply density, but rather to create more housing options: townhomes, row homes, three-plexes and four-plexes.

“Many of my friends, who were looking to get into the market, felt like they were stuck between a rock and a hard place,” she said.

“They could get into the condo market and be in a tower downtown, but a single-family home was completely out of the realm of possibility. They were looking for things like townhomes.

She pointed to an example of a housing development that she particulaly likes: one at the corner of East 41st Avenue and St. George Street in East Vancouver. 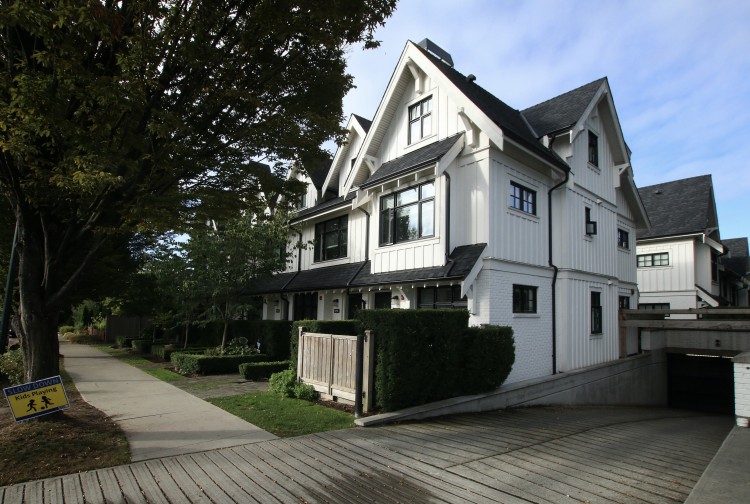 (Image: One of Dominato's favourite examples of gentle density is a townhouse project at the corner of East 41st Avenue and St. George Street in East Vancouver | Rob Kruyt)

"This townhome development is a great example of gentle density that I was envisioning in bringing my motion forward," she said. "[The townhomes] are adjacent to single-family homes, and fit nicely with the neighbourhood."

She praised the project's attributes, such as similar height to the single-family homes, and how it provided what she called "ground-oriented family housing,"

The project was undertaken via the city's now-retired Housing Demonstration Program, which required that proposals "demonstrate a new housing form in a neighbourhood, improve affordability, and a degree of neighbourhood support."

The builder acquired two single-family homes in 2012 for approximately $2.9 million, and the lots are 50 by 217 feet, which makes them wide and deep, Dominato said. There were 16 townhomes built on the lots, which include private outdoor space on patios, and a shared inner green space and courtyard. Parking is underground, mitigating any impact on neighbouring properties.