By Glen Korstrom | September 8, 2020, 8:08am
Banana Leaf co-owner Vivien Chong said about 80% of sales at her Davie Street location came from its patio this summer | Chung Chow

The COVID-19 pandemic is likely to change how Vancouverites dine this winter, much as it disrupted consumption patterns this summer.

Coun. Sarah Kirby-Yung told BIV that she plans to introduce a motion September 15 to allow owners of at least 361 temporary patios to keep them operating past October 31, when the city now requires them to close.

Her plan would mandate that the city continue to waive permit fees for these patios and change Temporary Expedited Patio Program (TEPP) requirements so restaurant owners can install heat lamps or otherwise heat the outdoor dining areas – something currently prohibited for this class of patio.

A separate city program that charges up to several thousand dollars in annual fees for a restaurant to operate a permanent patio is expected to coexist with the temporary-patio program through the winter.

“I would really expect that we need to review both programs to make sure that there is equity,” Kirby-Yung said.

Her unscientific Twitter poll in late August and early September found that 82% of respondents said they would visit restaurant patios in the city this fall and winter if given the option.

That, and a dire late-August report from the Canadian Chamber of Commerce, which estimated that 60% of restaurants could be forced to close by November, has persuaded Kirby-Yung that governments need to be flexible with regulations to help as many restaurants as possible survive the winter.

Restaurant principals, such as Banana Leaf’s Vivien Chong, told BIV that they fear losing customers if they are not able to provide them with an outdoor dining option.

Chong’s Davie Street location generated about 80% of its sales from its temporary patio after that area launched operations part-way through the summer.

While Chong said she would be willing to pay a small fee to be able to use the patio, she believes the city should waive fees until fear of COVID-19 and government restrictions end.

“As long as we’re in a pandemic environment, where we are not able to function properly as a business, I’d like to see the fees waived,” he said.

McCreath, who oversees operations at Steamworks in Gastown, as well as three Rogue Kitchen + Wetbar locations, has permanent and temporary patios.

He said the city has many regulations around how restaurant owners can enclose patios and on what kinds of heat sources they can use. He would like to see that red tape snipped to make patios more inviting and financially viable. 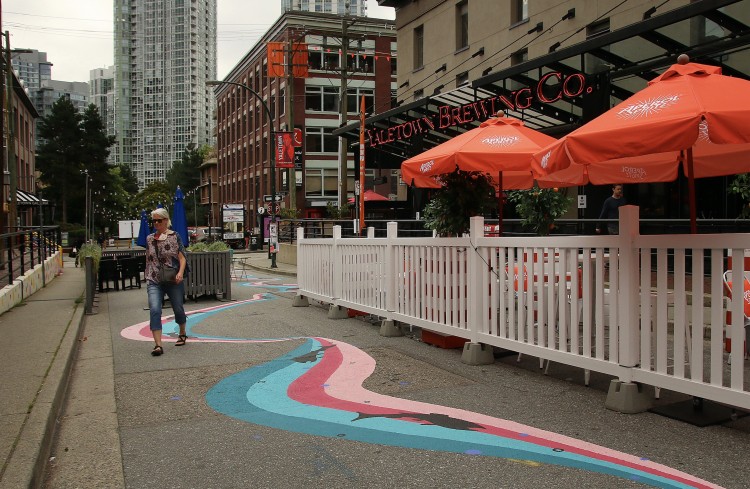 (Image: Temporary patios have sprung up across Vancouver this summer | Rob Kruyt)

McCreath said costs may force him to shelve plans to winterize a temporary patio outside his Steamworks pub in Gastown. Also, Steamworks is so large, at a pre-pandemic capacity of 750 seats, that many rooms are closed, and even with half that capacity open to make room for socially distanced patrons, he said there will be more than enough room inside the pub.

“The viability of a patio really depends on the property – how big it is, and what it is doing in sales,” he said. “If I’m operating a small place on Cambie Street that has 80 seats, and I’ve got this 30-seat patio outside, then that is life or death for me.”

British Columbia Restaurant and Food Services Association CEO Ian Tostenson met with city staff in mid-August to float the idea of allowing temporary patios to operate until at least next spring.

“The city seemed to really be enthusiastic about this,” he said.

“We are just trying to narrow it down to what the solution looks like.”

The city’s manager of street activities, Scott Edwards, did not respond to BIV’s request for an interview, but the city sent a statement saying, “City staff are exploring options to build upon the success of the TEPP.

“The city remains committed to supporting business during recovery, and staff are continuing to connect with local business and the restaurant industry on how their existing temporary patios are being implemented and [to get] input.” •