Game collector Kyle Seller says with COVID-19 there’s negativity: 'I’ve just tried to come up with something that makes you forget'

By Sarah Grochowski, Vancouver Is Awesome | October 9, 2020, 11:45am
A Vancouver-based arcade game rental company has adapted during COVID-19 times with the creation of its very own arcade. Photo: Industry Arcade

A Vancouver-based arcade game rental company has adapted during COVID-19 times with the creation of its very own arcade. Photo: Industry Arcade

“With COVID-19 there’s so much negativity – I’ve just tried to come up with something that makes you forget about that a little bit.”

That’s from pinball aficionado Kyle Seller, the founder of the new Industry Arcade which recently popped up near the New Westminster waterfront.

Nearly 50 arcade games now line the expansive industrial warehouse Seller used to house the vast collection he rented to bars and for events before the pandemic.

Though he started the venture East Van Amusements in 2013, it became largely unprofitable when a public health crisis was declared in British Columbia.

'It was like a hammer,” Seller told Vancouver Is Awesome. In March, revenue from arcade games rented out to Vancouver establishments “stopped dead."

By mid-April, the pinball location in which Seller supplied games – Pub 340 – closed its doors permanently. Along with it, other locations including Brewhall had to limit their rentals in order to make space for social distancing.

“We went from 10 games to just two there,” Seller explained. “Our profits have been cut by around 98 per cent. Nearly all of our accounts in Vancouver have closed.”

So the games man decided he had to act, and fast.

“I told myself I got to do something,” he said.

For the next four months, Seller and his wife worked to transform their “dirty old shop” in New Westminster into a fully functioning, private arcade for small family or social groups to rent.

“The space is all theirs, no general public at all,” Seller said, adding that most people are shocked when they first see the set-up. 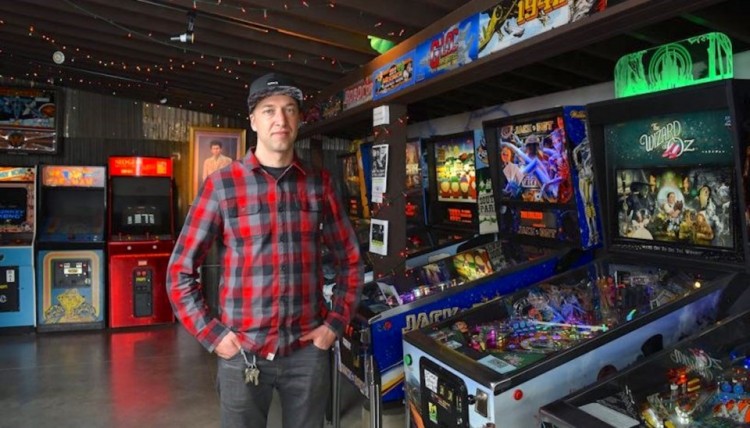 Groups are even allowed to bring their own food and drink – although, with Another Beer Company next door game players have been known to stop and enjoy a stout.

Seller and his wife conduct a one-hour process to thoroughly sanitize machines in between rental groups.

So far, having just recently opened, he said "we haven't made much money," but they've raised hundreds of dollars for charity by renting the space out by donation.

"This past weekend we had three groups book the space," Seller said. "It's been rewarding to see people have fun."

The owner is grateful the City of New Westminster granted the arcade a temporary use permit in the industrial space.