By Glen Korstrom | October 14, 2020, 8:00am
Artist’s rendering shows the curvy 601 Beach Crescent on the Granville Bridge’s east side, opposite the more angular Vancouver House | Jyom Architecture

Vancouver city council has voted to forever change how downtown Vancouver looks for drivers heading north across the Granville Bridge.

The September 30 decision approved a slender, curvy 55-storey tower that is set to be the second bookend for a major gateway into the city. Construction could start within a year, with work potentially complete in 2024.

Dubbed 601 Beach Crescent, the 535-foot-tall structure will stand across the bridge from the recently completed 49-storey Vancouver House, and is due east of the Seymour Street off-ramp. It is set to include 303 condominiums and 152 social-housing units.

Developer Pinnacle International pins the project’s value at about $250 million.

While the 495-foot-tall Vancouver House and 601 Beach Crescent have similarities, they also play off each other with different architectural features.

Its co-founder Kandice Kwok Lai was born and raised in Vancouver and launched the company in 2012 with husband Eric Elliott Lai, when the two were expatriates in Shanghai. Their firm has since added offices in Hong Kong, Metro Seattle and Vancouver. 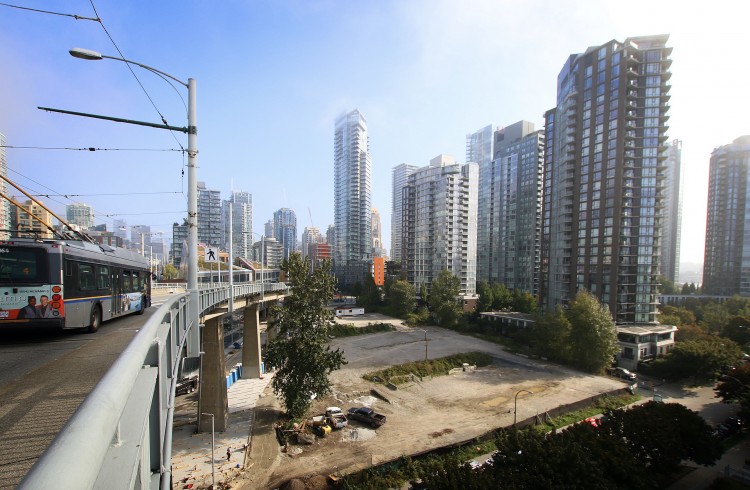 (Image: Here is the empty lot where construction is set to start on 601 Beach Crescent | Rob Kruyt)

JYOM Architecture is also engaged in a project that is part of the Lougheed Town Centre redevelopment in Burnaby.

Their challenge with 601 Beach Crescent, Kandice Kwok Lai said, was how to place the structure in harmony with its surroundings – particularly with the angular, twisting Vancouver House – because the City of Vancouver had made clear that the two buildings were to visually form a gateway to the downtown core.

“We had to kind of match the Vancouver house, which is beautiful architecture, but it’s from another developer,” Lai said. “So, we had to pair with it, but we were not really working with them, per se – and the buildings weren’t built at the same time.”

The result of much work designing and redesigning the project, she said, was that 601 Beach Crescent’s form and shape are conceived to be a kind of dance partner for Vancouver House.

One school of thought in architectural circles is that what can enhance buildings’ aesthetic appeal is if they fit the context of their surroundings – sometimes through colour, shape, scale, height or even by mimicking subtle elements.

The concept, however, is controversial.

The late Arthur Erickson told BIV in 2000 that the idea that a new building should reference or resemble its surroundings was “a lot of bunk,” although he added that he often likes to contrast his buildings with those nearby.

Vancouver has plenty of examples of buildings that meld with surroundings, as well as many that have starkly contrasting styles compared with those of their neighbours.

For example, the six-year-old, 35-storey MNP tower that Musson Cattell Mackey Partnership (MCMP) designed for 1021 West Hastings Street has a glass façade that towers above its neighbouring Art Deco-style Marine Building, which opened in 1930. 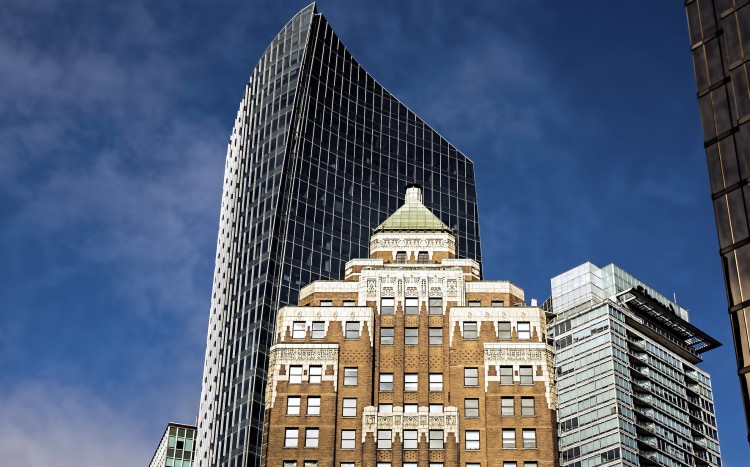 Similarly, the modernist 1950s-era Electra Building, at 989 Nelson Street, and the 2001-built One Wall Centre, at 1000 Burrard Street, stand in contrast to two historic churches across Burrard Street: the 1910-built First Baptist Church and the 1927-built St. Andrew’s Wesley Church. 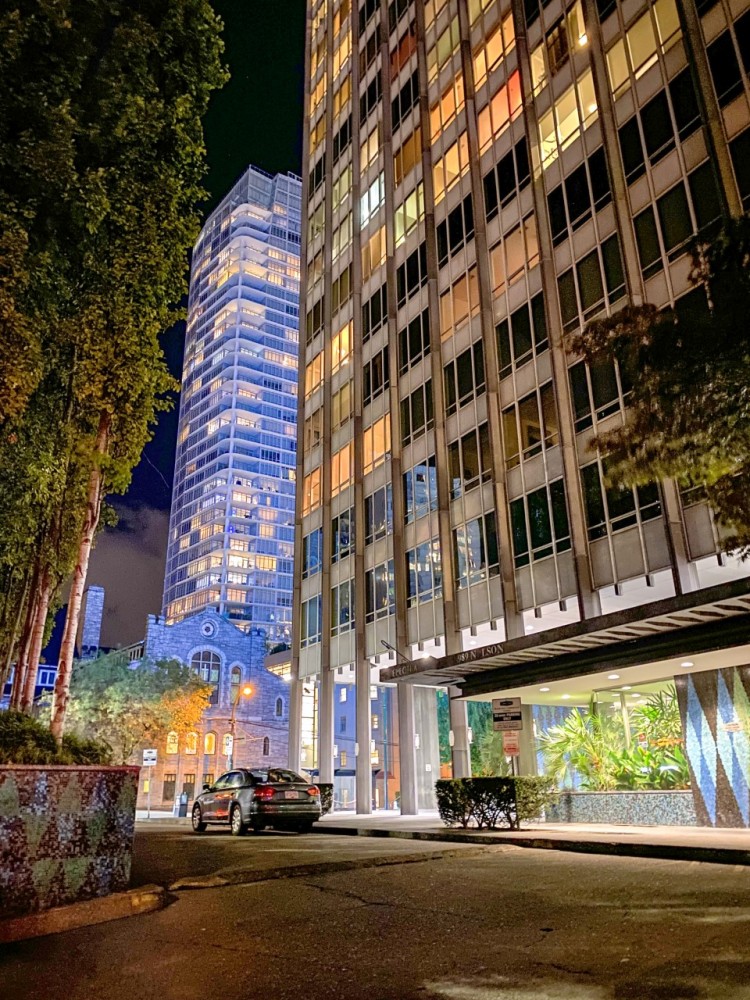 (Image: The the 1910-built First Baptist Church is visible past the entranceway for the 1950s-era Electra Building | Anders Falk) 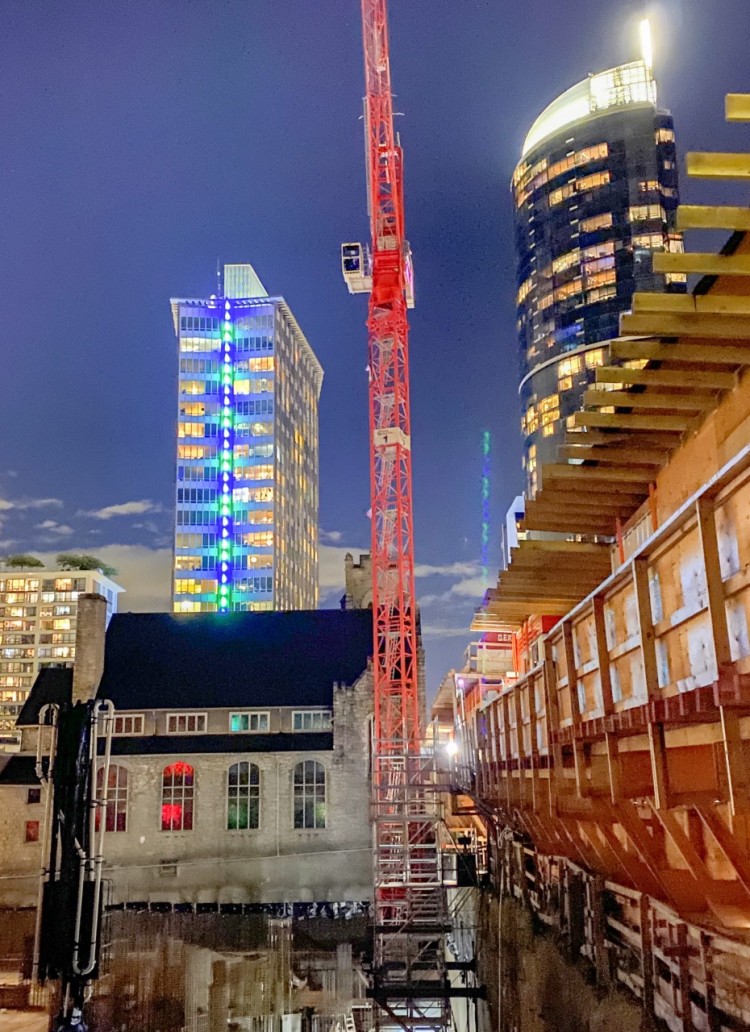 (Image: The colourful Electra Building stands behind the First Baptist Church in a way that will not be visible for too much longer, given construction taking place immediately west of the church, while One Wall Centre soars even higher on the right | Anders Falk)

Architects designing other buildings in Vancouver, however, made efforts to echo features of established neighbours.

The 1991-built, Merrick Architecture-designed Cathedral Place office building at 925 West Georgia Street, for example, has a faux-copper roof that is similar in style to the steeply slanted copper roof at the nearby Fairmont Hotel Vancouver, which opened more than 50 years earlier. 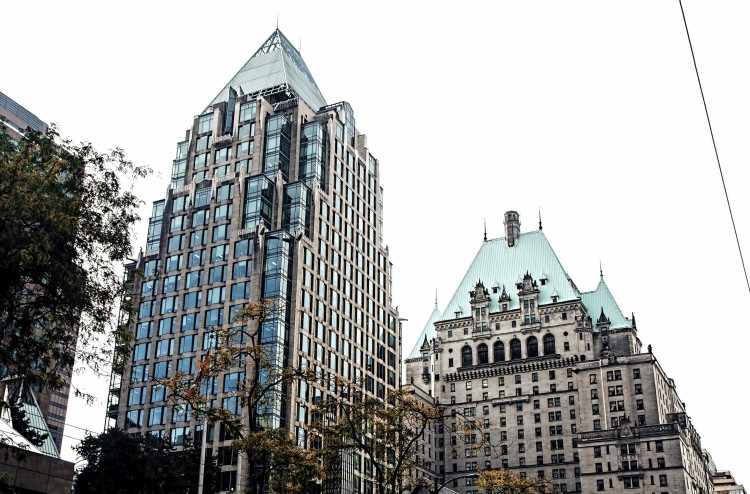 (Image: The 1991-built Cathedral Place stands in front of its much older neighbour, the Hotel Vancouver, which opened in 1939 | Chung Chow)

Another example of a new structure blending in with an older neighbour is the Daon Building, now known as 999 West Hastings Street. A forerunner firm to MCMP, Musson Cattell & Partners, designed the 1983-completed 19-storey mid-rise featuring mirrored glass and brown brick that flows seamlessly into the brick exterior of the Vancouver Club building, built in 1913. 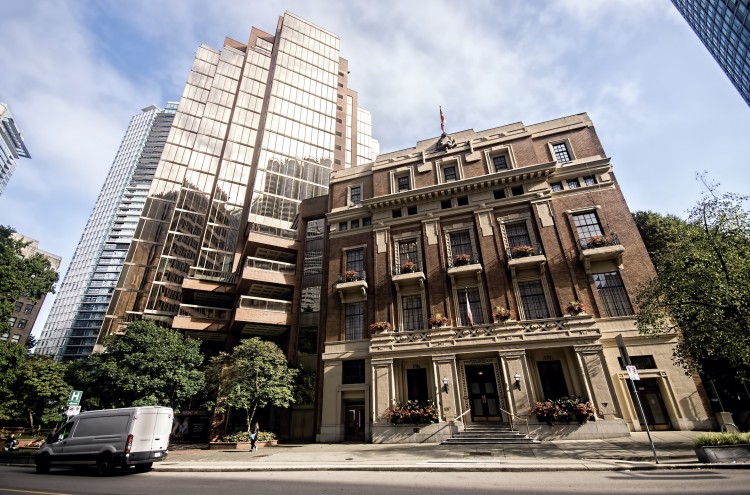 Lai said that in stark contrast to the boxy rectangular top of Vancouver House, 601 Beach Crescent is to have a wavier form that is intended to show movement.

“Because [Vancouver House is] heavier on top, we’re trying to become slimmer, so that there’s a kind of contrast,” she said.

“The thinnest part [of 601 Beach Crescent] is about two-thirds up, whereas Vancouver House sort of bulges out, and then at the top of the crown, our building flares out slightly again, just to create the top.”

Lai stressed the importance of considering local context, particularly for residential buildings, and said that this is top of mind in every project that her firm accepts.

“We really feel that an identity, or living presence, is defined by the community, the culture of the neighbours, and hopefully, the architecture really also becomes part of the reason why people are living in that building.”

Councillors Melissa De Genova and Colleen Hardwick were opposed and Sarah Kirby-Yung was absent in city council’s 8-2 vote to approve the 55-storey tower. •