Many industries have suffered revenue and employment declines as a result of the pandemic this year.

However, the province’s leading post-secondary institutions have weathered the storm when it comes to their student numbers, according to data collected on BIV’s Biggest Post-Secondary Institutions in B.C. list.

The top four schools grew significantly more in 2020 than they did in 2019, boasting more than six times last year’s growth on average.

Over the past year the average number of students attending the province’s biggest post-secondary institutions grew by 2.4% to 11,557.1 full-time equivalent students from 11,281.3 in 2019. The average growth in 2020 was slightly more than 2019’s average one-year increase of 2.1%. 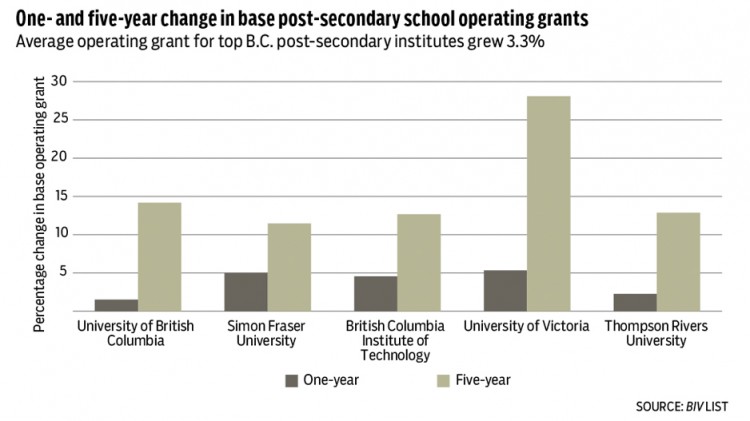 However, the median number of students attending the top 20 post-secondary institutions grew significantly more than the average, jumping 12.6% to 7,657.8 full-time equivalent students in 2020 from 6,803.5 in 2019. This suggests that smaller schools lower on the list experienced greater student growth than larger companies higher on the list.

Operating grants for the largest universities also grew more in 2020 than they did in 2019.

The average operating grant for the top post-secondary institutions increased more than their average number of students, increasing 3.4% to $103.9 million in 2020 from $100.6 million in 2019. No. 4 University of Victoria had the largest percentage increase in operating grants.