What happened: General Fusion commissions AL_A to help with design of demonstration plant

A B.C. company seeking to unlock fusion power on a commercial level is one step closer after commissioning a British architecture firm to help design its demonstration plant.

Burnaby-based General Fusion Inc. unveiled renderings this week of the cylindrical facility with prominent glass corridors that allow visitors to peer at the multi-storey technology capable of producing clean energy.

“This idea of transparency and engagement is part of what we want to achieve here with the demonstration facility,” CEO Christofer Mowry told BIV.

“Nuclear power kind of started behind the eight ball, if you will, in terms of community engagement. And I think fusion, because of the nature of the technology, has an opportunity to really redefine the relationship between society and energy.”

Fusion energy is produced when atoms are fused, kicking out neutrons, which then power a reaction that can generate heat.

Fusion is most often associated as a process that occurs in the sun.

Producing a fusion reaction on Earth first requires turning two elements — deuterium and tritium, which are both heavy hydrogen isotopes — into a plasma.

Unlike fission power, which uses highly radioactive uranium and produces long-lived radioactive waste, the radioactive residuals of fusion power would be short-lived, and there is no risk of runaway meltdowns.

So far General Fusion has raised upwards of US$200 million from investors as it seeks to commercialize harnessing this type of clean power, according to Mowry.

Story continues below the image ... 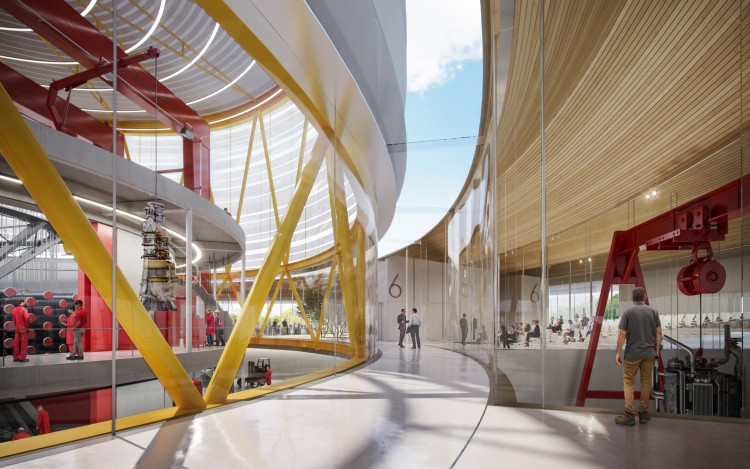 
The CEO added the commissioning of London-based AL_A (Amanda Levete Architects Ltd.) to help design the prototype facility came about through “serendipity” after he spoke at a conference Singapore.

“She invited me to come give a talk in her office in London next time I was [in the U.K.],” he said.

“Her organization was there and they just totally embraced this thing and she said, ‘Hey, I want to be a part of this.’ And that was the start of what has now become a true partnership.”

AL_A’s initial renderings are derived from the computer-aided designs (CAD) of the demonstration plant.

The plant is at the end of the conceptual design phase and will soon be moving into detail design.

General Fusion is still in the midst of a global search for a location for the plant.

The company had originally planned on selecting a spot by the end of 2020 but Mowry said COVID-19 has made that goal more challenging.

“The demonstration plant is not an end in and of itself. It’s a means to an end and it’s a stepping stone to commercialization,” he said, referring to the fact it’s meant to demonstrate to potential buyers the capabilities of the technology rather than put megawatts on the grid.

Mowry hopes to have shovels in the ground within two years of the site being selected.

Factors being weighed include proximity to universities or national labs with fusion competencies, the cost of construction and availability of host financing.

“Ultimately this all boils down to what location gives us, as a company, the biggest chance of being successful,” the CEO said.