'How is that possible?': COVID-19 cases rise to 24 at Port Coquitlam seniors home

By Stéfan Labbe, Diane Strandberg, Tri-City News | November 5, 2020, 3:11pm
Alvin Smith, 85, tested positive for COVID-19 only days after he was released from a 14-day self-isolation | Submitted

The family of a man who tested positive for COVID-19 at a Port Coquitlam seniors home is calling on health authorities to ease visitor restrictions even as the virus rages inside the facility.

There are now at least 24 people who have tested positive for the virus at Hawthorne Senior Care Community, according to Fraser Health — 17 residents and five staff in an assisted living section outbreak declared Oct. 30, and two residents in a separate outbreak declared Nov. 3 in the residence’s long-term care section.

Across the province, 29 assisted living and long-term care homes are battling outbreaks of COVID-19.

“What we’re seeing in our independent and assisted living, and in our long-term care facilities, just as what we’re seeing in our schools, reflects the number of cases in the community,” Fraser Health deputy medical health officer Dr. Elizabeth Brodkin told the Tri-City News in response to questions over how staff continued to introduce the virus into care homes.

But the fact that loved ones are catching COVID-19 despite visitation restrictions and heightened safety protocols is cold comfort for some.

Port Coquitlam resident Leonard Smith said his father, Alvin, tested positive for the virus only days after completing a 14-day quarantine required for being allowed to leave the assisted living facility to attend his wife’s funeral.

“It doesn’t make sense, he comes out of quarantine and gets COVID-19,” the son, Leonard, told the Tri-City News. 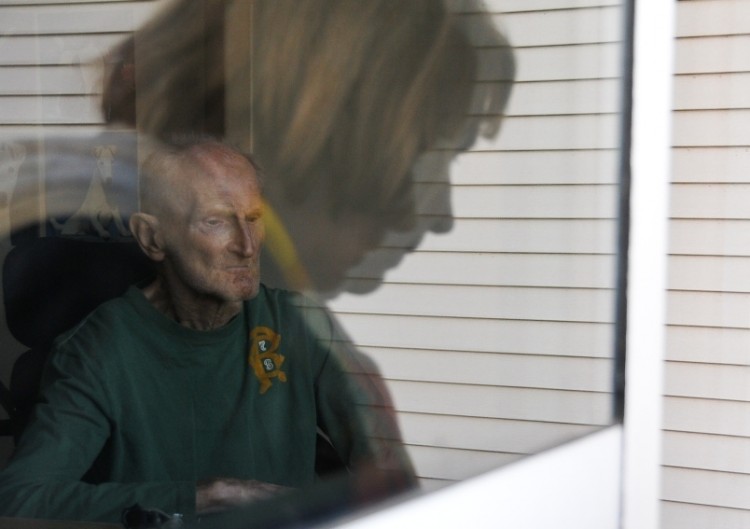 The Smiths aren't the only family frustrated by tight visitor restrictions. Here, Brigitte Beurmann waves to her husband Bernie, who suffers from vascular dementia and lives under lockdown at Hawthorne Seniors Care Community in Port Coquitlam. Brigitte has paid window visits to Bernie every day since the pandemic lockdown began, but worries restrictions are so limited he won't recognize her at all. Photo: Stefan Labbe, Tri-City News

A resident of Hawthorne’s assisted living tower, Alvin had been separated from his wife, Doris, who lived at Nicola Lodge Care Community, which declared an end to its own outbreak June 26.

For months, the couple of 57 years could only FaceTime each other to stay in touch. As Doris’ dementia got worse, conversations became increasingly difficult.

Then, at the end of September, Doris’ health took a steep decline.

Their son, Leonard, and the rest of the family pushed Hawthorne to release Alvin so he could visit his wife at Nicola Lodge.

But by the time all the permissions had gone through, it was too late: Doris passed just 45 minutes after Leonard got to her bedside. Alvin never made it.

“I think what she died of was a broken heart,” said Leonard. “She was used to seeing my dad three times a week before they closed everything.”

For the Smith family, the extended lockdown of residents and COVID-19 protocols make visiting loved ones an arduous challenge.

“I understand what they’re trying to do. Everybody gets that [but] we're talking about human beings. We're not talking about livestock. And human beings, we all know, need human contact to thrive… or we would all be living in a cave by ourselves,” Smith said.

Now Leonard worries that sense of loneliness is going to hit his father as hard as his mother. When Leonard went to break the news to his father at the outdoor socially distanced visitation sites set up by Hawthorne, he knew it was going to be tough.

After a stroke, the 85-year-old man had difficulty speaking and hearing and he relies on reading people’s lips.

But with a mask on and at the opposite end of a table, the son couldn’t mouth the words that his wife of nearly 60 years had died.

When the devastating news finally got through, Alvin broke down. “He collapsed on the table and started crying,” said the son.

MEMORIAL AND BACK AGAIN

Doris’ memorial was set for mid-October, and the staff at Hawthorne granted Alvin a release to lay her to rest.

“They were afraid we were going to give it to him,” said Leonard. “Taking him to the memorial, that could be bad. We knew the risks.”

After one night at his son’s home and another evening at his daughter’s, Alvin returned to Hawthorne where he was put into a precautionary 14 days of self-isolation in his room.

Still, only a few days after his release, Leonard got a call: His father had tested positive for COVID-19.

“How is that possible?” questioned Leonard. “I never visited him. None of my family members gave it to him. The only people he has contact with is staff.”

As of Wednesday, Nov. 4, Alvin had not yet developed symptoms; however, according to Fraser Health’s Dr. Brodkin, symptoms of COVID-19 are usually present between three and 12 days after exposure.

Smith said he learned of the severity of the outbreak — now two dozen people — through a Tri-City News report. Without that article, he would have been in the dark.

“It’s just weird, on the one hand, they're saying the cases aren’t that bad, on the other hand, there’s evidence,” he said. 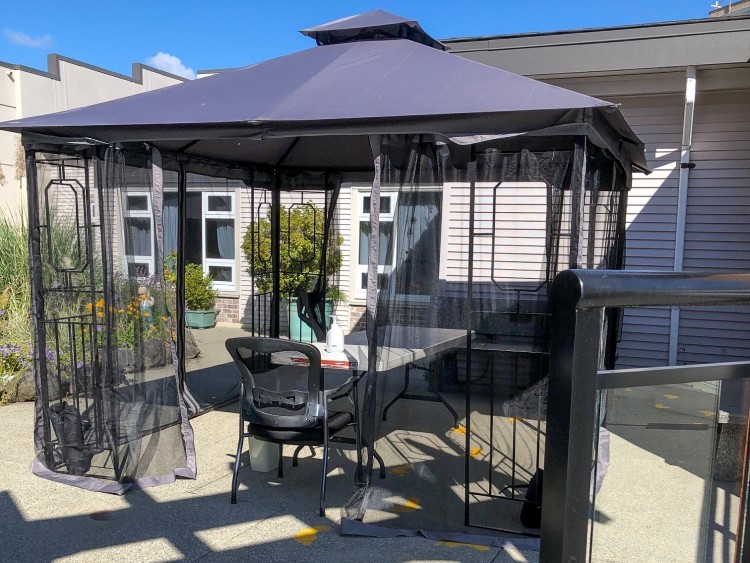 Hawthorne Seniors Care Community has set up seven visitation booths outside its Port Coquitlam facilities where family and residents can speak to each other at opposite ends of the table. - Submitted

To date, roughly 52% of deaths in B.C. and 77% of deaths across Canada due to COVID-19 have been linked to the long-term care sector.

Soon though, certain details about COVID-19 case counts at assisted living and long-term care homes may be withheld from the public — even as more sites declare outbreaks.

On Wednesday, the Ministry of Health said it would no longer release a daily breakdown of staff and resident cases at individual seniors facilities, citing a demand on staff.

“[The BC Centre for Disease Control] reports that this is international best practice for monitoring outbreaks at a large jurisdictional level,” wrote a spokesperson from the ministry Thursday.

More pressing for those inside such facilities, says the son, is striking a balance between keeping the virus out and keeping family visits up to the point where life for the residents is worth living.

“As a family member, you believe in stringent protocols to allow people into the facility," he said. "[But] when it’s brought in by a staff member, what’s the point of the protocols? It’s just stopping visitors to see their relatives.”