It takes just a short walk downtown, along main shopping corridors, such as Robson or Granville streets, to see evidence that empty storefronts are on the rise.

In many cases, the retailers and restaurateurs who remain have uncrowded premises either because they restrict capacity or because demand is soft thanks to a lack of tourists and a dwindling number of office workers.

There is an old adage about seeking opportunity when there is proverbial blood on the streets and, indeed, there are some entrepreneurs eyeing locations.

Glowbal Restaurant Group owner Emad Yacoub, for example, has been scouting locations for his 11th eatery.

“I am right now not even offering 50% of what was the norm downtown [pre-pandemic],” Yacoub said.

If he finds that discounted lease rate for a viable location, Yacoub said, it will be six to 12 months before he is ready to open. By then, the pandemic could be on wane, with office workers returning to downtown towers – putting him in good stead for years to come.

For small-business owners who have recently opened street-front locations, the landscape today looks far different from what it was when they signed their leases.

“We do a lot of work to determine if a location is the right fit,” said Muse Cannabis president Geoff Dear, who opened his company’s second location, at 460 Granville Street near West Pender Street, in June.

“Part of that is looking at surveys of foot traffic in areas, so we knew that the corner of Granville and Pender is up from the train station, and across the street from a SkyTrain station – where people are getting to and from concerts, and sporting events and things like that. This was a location that we were extremely excited to get.”

That excitement dimmed when what Dear called the “unfortunate reality” set in, and he realized that the store was seeing a fraction of the expected foot traffic pass by the front door.

What’s more is that the people who are passing by the store are more likely to be down on their luck than dressed up and rushing to get to events.

“The amount of addiction and mental health [challenges] and people sleeping on sidewalks right in front of the store or right around the corner – it’s staggering, to the point of literally stepping over human feces on busy sidewalks,” Dear said. 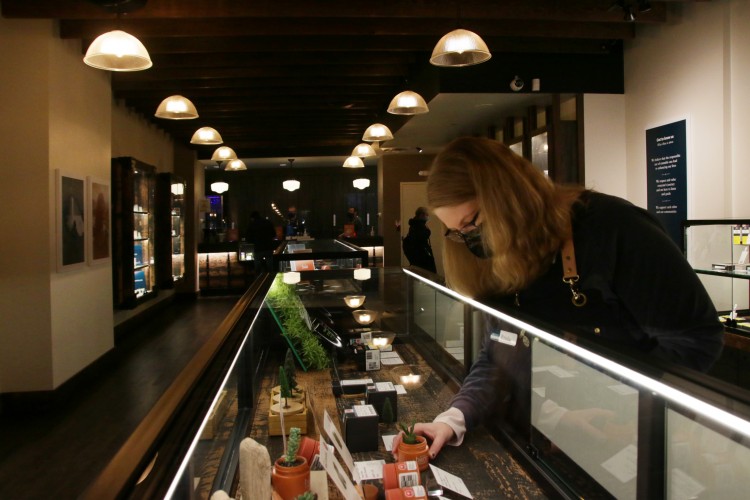 Muse Cannabis recently won council approval to open in Maple Ridge, and it plans to have eight stores in B.C. within the next few years.

Deeper pocketed global brands often have more wherewithal to survive downturns than their smaller counterparts, and they may be able to capitalize on having less competition.

The pandemic, for example, did not delay Foot Locker from closing and replacing two smaller stores on Robson Street with a 14,500-square-foot flagship store at 1067 Robson.

Nicholas Keeling, Foot Locker’s market director for the Canadian region known as Vancouver/West told BIV that planning for the new store has been going on for at least a year.

“In the future, we’ll partner with local vendor brands, and have those brands represented within the product selection of our store,” he said. “I would say that’s where our ‘wow factor’ is.”

Foot Locker’s new flagship store is conventional in its format – unlike competitor Sport Chek, which opened at the corner of Howe and Robson streets in the former Chapters space in 2016.

When Sport Chek launched, its pizazz included holograms of flaming shoes, and interactive technology that allowed customers to point to products in interactive displays to get more information.

Keeling said that Foot Locker does not have those kinds of attractions for customers and that local artwork, expanded selection and customer service will be hallmarks of the new store.

“We’ve got fixturings that can be manoeuvred, and we’ve got some audio-visual equipment that can assist in [holding] some larger scale gatherings when the time is right.” •