By Glen Korstrom | January 6, 2021, 10:29am
Cannabis is now legal for recreational use in 15 states as well as the District of Columbia | Getty Images

Last night's two U.S. Senate elections in Georgia resulted in the Democrats winning one seat and being ahead in the other, in a race that remains too close to officially call.

This prompted gains in North American stock markets, as investors envision a Democrat-controlled Senate that would be likely to approve more government stimulus.

Large technology stocks saw share prices lag, as investors speculate that the Senate may more strictly regulate the sector, or put in place anti-trust measures to limit the dominance of companies such as Apple Inc. (Nasdaq:AAPL), Facebook Inc. (Nasdaq:FB) or Alphabet Inc. (Nasdaq:GOOGL.)

Companies that benefit from public infrastructure projects, such as Caterpillar Inc. (NYSE:CAT), soared, as did those involved in clean-energy, such as solar-power companies. 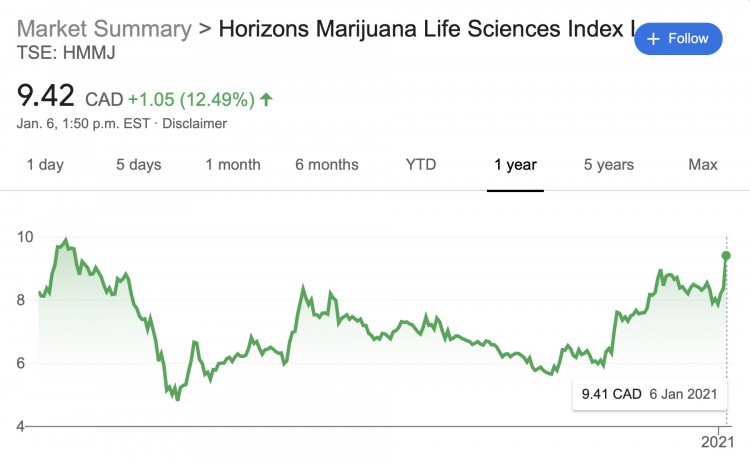 In December, the U.S. House of Representatives passed a bill to decriminalize cannabis. A Democrat-led Senate would be more likely to support that measure than would a Republican-led Senate. Other reform measures related to cannabis, such as making it easier for companies to access banking, would also help the sector. Cannabis is now legal for recreational use in 15 states and the District of Columbia, and legal for medical purposes in an additional 20 states.

Industry consultant and Materia Ventures CEO Deepak Anand told BIV that he doubts that even if the Democrats control both houses of Congress, the party is unlikely to soon move to legalize cannabis for adult use nation-wide.

If Democrats win the two seats, the party would control 50 seats in the 100-seat Senate, with vice-president-elect Kamala Harris eligible to break tie votes.