Venture capitalist and Varshney Capital partner Praveen Varshney started buying Bitcoin in 2017, when the cryptocurrency was priced around US$15,000.

His teenaged son, Aneesh, was too young to open an account but had been pestering Varshney to open one so Aneesh could invest $500.

The Varshneys have since invested thousands more dollars into the cryptocurrency, which surged more than 300% in the past six months to a value of more than US$40,000 for the first time in early January.

Their most recent purchases were in late December.

(Image: This chart shows Bitcoin's value during the past year | TradingView.com)

Varshney also co-founded Mogo – a Vancouver-based financial-technology company with a platform that enables the general public to buy Bitcoin.

“What investors in Bitcoin like is that it has an arithmetically programmed, fixed supply of 21 million [coins],” Varshney said. “You can’t ‘print’ or make more Bitcoin.”

That fixed supply buttresses Bitcoin’s stored value compared with fiat currencies, which governments around the world have debased by printing additional money to help grapple with ever-larger debts, he said.

Around 18.5 million bitcoins are in circulation. The remaining 2.5 million have yet to be mined or created.

Varshney said Mogo charges a 1% fee to buy bitcoins, has competitive exchange rates and does not require account holders to provide passport identification, which some platforms demand.

Another popular way to invest in Bitcoin is to buy shares in Grayscale Bitcoin Trust, which is solely invested in Bitcoin, so its share price tracks the price of Bitcoin.

Regardless of how an investor wants to gain exposure to the price of Bitcoin, there are plenty of financial advisers who suggest a rethink.

“It is in bubble territory,” said longtime money manager and author Thane Stenner, who recently joined Canaccord Genuity Wealth Management as a director and vice-president of wealth management. “The old historical story around the Dutch tulip frenzy comes to mind.”

In the 1600s, single tulip bulbs in the Dutch Republic sold for many times the average annual salary of skilled workers.

“I struggle to fully understand the value proposition of Bitcoin vis-a-vis gold,” Stenner said, “and my bet would remain on gold long term.” 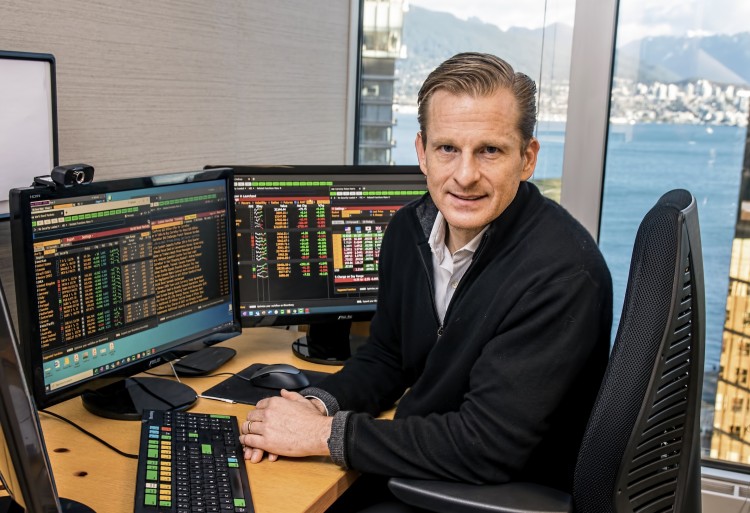 (Image: Leith Wheeler CEO Jim Gilliland says his company does not invest in Bitcoin or other digital currencies because their fundamental values are obscure | Chung Chow)

“It’s unclear, in terms of the demand, as to what the fair value for something like Bitcoin is,” he said.

“For us, as value investors, we would like to have some underlying pinning of value. For companies, it’s earnings power. For credit instruments, it’s the ability to repay. For something like a digital currency, even though it has a restricted supply and is used as a store of value, for us, we can’t have a clear understanding of what the underlying value is of that asset, so we don’t invest in digital currencies on behalf of our clients.”

He pointed to a JPMorgan Chase & Co. research note in early January, written by managing director Nikolaos Panigirtzoglou, which said Bitcoin’s price has the potential to reach US$146,000 in the long term.

“If it becomes a true tender, It’s going to have some legs here,” said Wachell, who owns no Bitcoin and has not bought any for clients.

He suspects that central banks around the world could try to control cryptocurrencies by taxing them.

Varshney, however, rejects that idea.

“How can they?” Varshney asked. “This is a global currency. How does a government even monitor it?” •