By Mike Howell | January 13, 2021
Doug Ehret, 55, is a resident of the Strathcona Park homeless camp, where showers, washrooms and a warming tent were being set up Tuesday | Photo: Rob Kruyt/BIV News

A warming tent, showers and washrooms were being set up Tuesday on the edge of the Strathcona Park homeless camp in what a city official says are temporary services for the estimated 200 people living in tents and other structures at the encampment.

A letter sent to Strathcona residents Tuesday from Sandra Singh, the city’s general manager of arts, culture and community services, gave no indication how long the services would be in place but said the city continues to work with BC Housing and the park board to find accommodation for the campers.

So far, 30 people have been moved indoors.

“All three partners are acutely aware of the deteriorating conditions in Strathcona Park and recognize the impact that this is having on the community,” Singh said in her letter sent on behalf of the city, BC Housing and the park board.

“We are also concerned about the safety of people who are sleeping regularly in the park as the combination of the pandemic and winter weather is making a difficult situation even worse, and that is why we’re bringing in these vital temporary services. 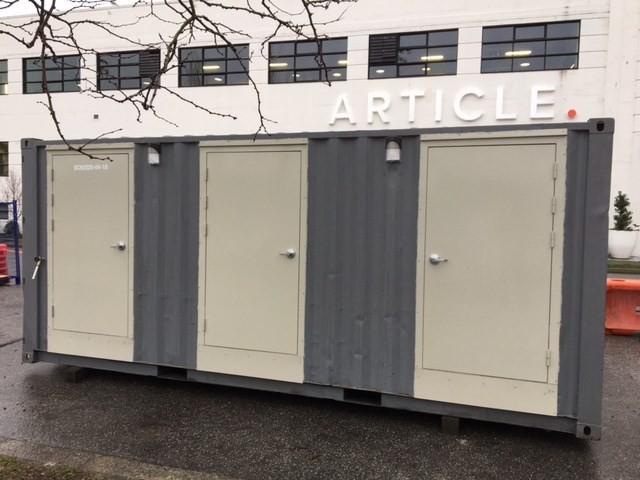 Dan Jackson, president of the Strathcona Residents Association, said Singh and park board general manager Donnie Rosa made it clear to residents via a Zoom meeting last week that the goal is to dismantle the homeless camp.

Jackson said Singh nor Rosa would commit to a deadline, noting the city is awaiting provincial government funding to operate buildings the city has either secured or is close to securing to house homeless people.

“They told us the plan is to immediately but incrementally move people out of the camp as housing becomes available, and to try to contain the encampment to a certain part of the park so that the park can be recovered,” Jackson said.

“Everybody in the neighbourhood feels bad for the people in the park, with the weather being as crappy as it is, and we’re glad to see some sort of support services going in there for them — as long as it’s part of a plan to eventually close down the encampment.”

Information provided to Glacier Media from the city Tuesday explained that fencing was installed on the Prior Street side of the park with the goal to reduce the footprint of the encampment.

Park rangers will be asking people in tents across the park to relocate to a spot near the showers and warming tent, where gravel has been spread across a field in an effort to cover up the muddy grounds.

Removal of garbage and other debris will continue this week as part of a joint initiative between park board staff and a “peer-led group,” an emailed city statement said. 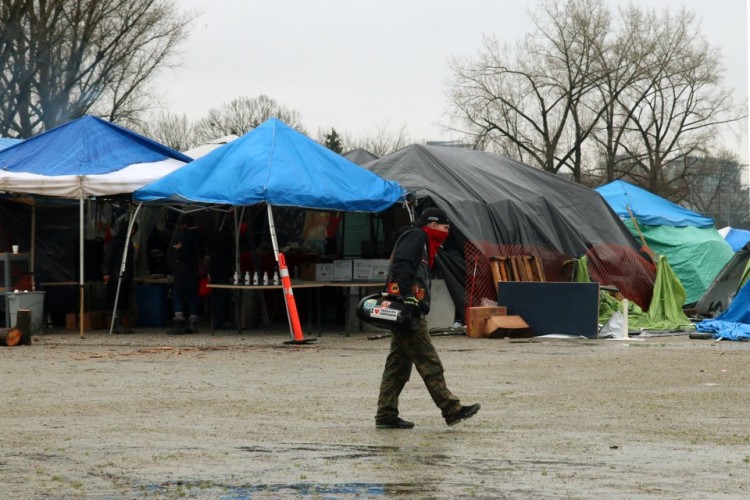 The Strathcona Park encampment was set up in June 2020. Photo Rob Kruyt/BIV News

Glacier Media visited the encampment Tuesday where two construction-type trailers that contain four shower stalls, six toilets and sinks were put in place on the Raymur Street side of the park.

A large warming tent the size of a transit bus was being set up next to the trailers. A non-profit organization will oversee the operation of the facilities, which will be open 24 hours a day and monitored by security.

Doug Ehret, a 55-year-old resident of the camp, watched as the structures were positioned along a space that was recently occupied by 10 recreational vehicles, which were relocated last week to other parking spots around the park.

“A lot of people here go to work or school part time or pick up a day job, so having a shower first thing in the morning to clean yourself up, it means the world,” he said in between sips of coffee. “People are going to feel better about themselves. If people feel better, they’re going to do better things and make better decisions.”

Ehret was among the first campers at the encampment, which was set up in June 2020 after camps at Oppenheimer Park and CRAB park were cleared. Housing advocates estimate the population of the Strathcona camp is 200 people, along with up to 100 in recreational vehicles that remain along the park’s edge.

Fiona York, a volunteer at the encampment, said campers have moved into single-room-occupancy hotels [SROs] such as The Flint and The London. York said she was concerned the new facilities would not be operated by people associated to the camp.

That concern was amplified by an extremely agitated resident of the camp who yelled Tuesday at BC Housing staff and others about security guards being attached to the showers and warming tent.

“People are not going to want to use facilities under the watch of a security guard instead of having our own peers monitoring for safety and handing out towels and helping people to use the showers.” 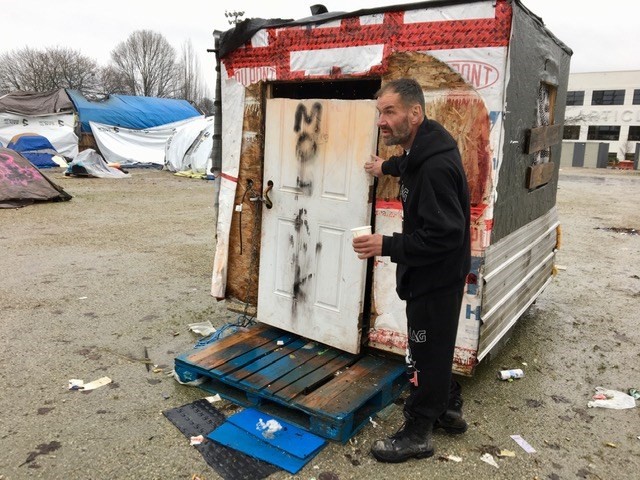 The encampment has been a source of community unrest in Strathcona, where complaints of crime and street disorder — along with fears over using the park’s playground and dog run area — have been voiced to city council and park board commissioners.

At the same time, homeless people such as Ehret say there is inadequate housing available for low-income people and those with mental health and addiction challenges, noting a single-room-occupancy hotel he lived in on East Pender for a month last year was dirty, rodent-infested and unsafe.

He said he wore a “stab-proof” vest when he lived there.

“I’m better off down here,” said Ehret, who lives in a small converted utility trailer.

“I think the solution is — and I think the residents would agree with me — is that we need suitable housing for everybody, not SROs, not hotels, but places that people can actually call home.”