By Mike Howell | March 5, 2021, 1:22pm
The Vancouver Rent Bank has seen a significant increase in applicants for loans and grants since the pandemic was declared in March 2020. File photo Dan Toulgoet

The number of people seeking short-term financial help from the Vancouver Rent Bank has increased significantly since the pandemic was declared in March 2020, with job loss and underemployment driving the demand.

The volume in applicants has fluctuated each month but what has remained steady is a need for assistance at a scale higher than in pre-pandemic times, when the rent bank received an average of 20 to 30 enquiries per month.

The increase in demand was most significant last March when 133 requests for financial aid were filed over 11 days. That volume compares to 41 for the entire month of March in 2019.

The demand has continued into 2021, with 15 enquiries over eight days in February, despite provincial and federal government support programs put in place over the last year to help Canadians hit financially hard by the pandemic.

Kellie Carroll and her staff at the Network of Inner City Community Services Society, which operates the rent bank, have been on the receiving end of the requests from people seeking financial assistance.

A combination of factors has led to the demand, said Carroll, pointing to the pandemic’s devastating effect on the economy and how the city’s poverty crisis has been further exposed, going “from cracks to fault lines.” 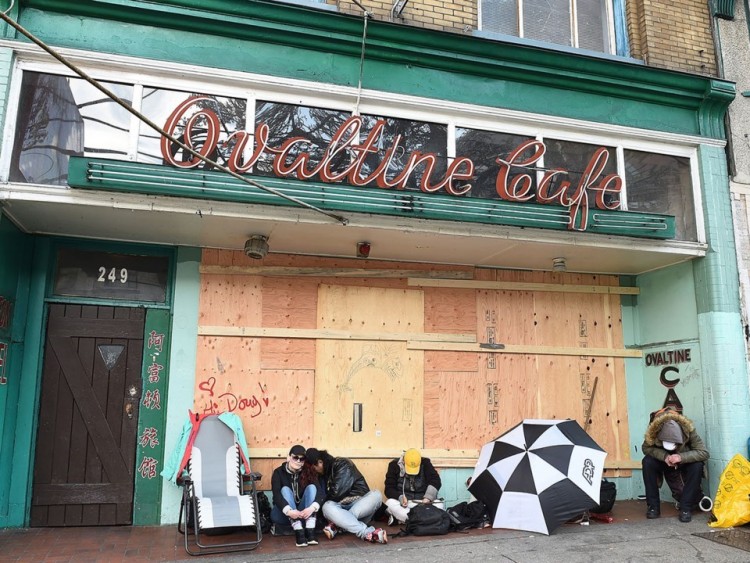 The city's most vulnerable have been hardest hit by the pandemic, with homelessness and drug overdose deaths at all-time highs. File photo Dan Toulgoet

The number of people living on the street is at an all-time high in Vancouver – 750, according to city staff’s recent estimate – and more people died of a drug overdose in B.C. in 2020 than any year on record, with 411 in Vancouver.

The unemployment rate in B.C. was eight per cent in January and employment is down by 44,660 jobs from 12 months ago, “mainly due to the implications of the COVID-19 pandemic, according to a labour market report from the B.C. government.

While applicants for rent support have cited job loss and underemployment as reasons for assistance, others have pointed to a family break-up, a health crisis – including losing a family member to COVID-19 – and intimate partner violence.

In one case, a young person sought assistance after being kicked out of the family home for identifying as transgendered. Many seniors have also contacted the rent bank. Homeless people are clients.

“Working in the Vancouver Rent Bank as a frontline person – as a case manager – is a difficult job to start with because you see people in crisis all the time,” Carroll said. “Right now, it can be overwhelming. You’re seeing people who are afraid, and not seeing any hope.”

Loans and grants are sent to landlords, the gift cards go directly to renters.

Some of the grants – made available via the federal government’s Reaching Home fund – helped people pay phone bills, buy a phone or get connected to the internet.

Prior to the pandemic, the rent bank provided loans to families and individuals considered low-income and at risk of eviction, or who had trouble paying their hydro or another utility bill.

Those ceilings and parameters still exist but the Reaching Home fund has allowed the rent bank to provide one-time grants during the pandemic of $1,500 and $1,800 in those same categories.

“A lot of the people who have come to us during the pandemic would not normally qualify for a rent bank loan, given the income they have,” Carroll said. “But the situation has changed. They're underemployed, they're no longer able to pay for their rent because of the astronomical costs of rent in this city.” 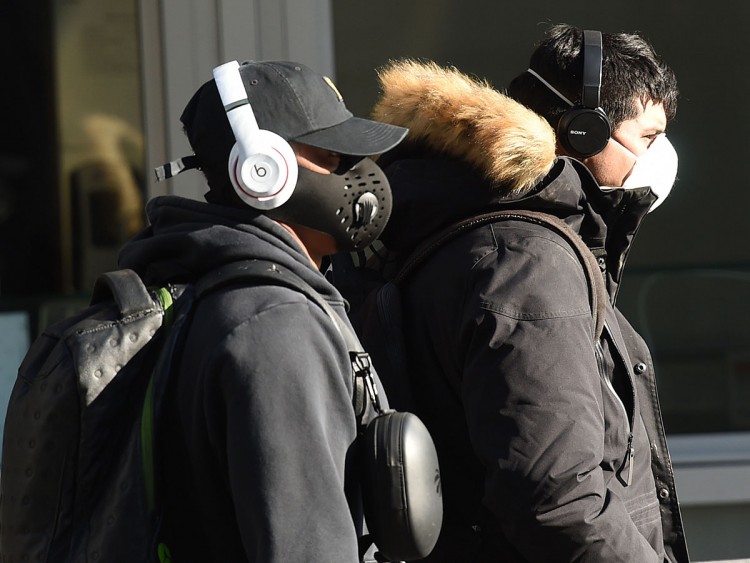 Many people who have sought financial help during the pandemic would not normally qualify for a rent bank loan. File photo Dan Toulgoet

Rent up two per cent

The City of Vancouver provided $372,600 to the bank between 2012 and 2019, with organizations such as the Streetohome Foundation, Vancouver Foundation and the University of B.C. also contributing funds.

The Giustra Foundation and Hollyburn Properties are current funders of the bank’s operating costs, said Carroll, noting the bank is staffed by three-full time employees and has had to redirect some staff from the Network of Inner City Community Services Society to assist with the workload.

“Funding is funding, and that’s what we can afford right now,” she said.

More than half of Vancouver’s residents are renters.

A staff report going before city council next week said the average rent across all unit types in Vancouver was $1,598 per month last year, an increase of two per cent over 2019, despite a higher vacancy rate and province-wide rent freeze.

The average rent figure was taken from Canada Mortgage and Housing Corporation’s annual rental report, which was released in January. The report showed the average rent for a one-bedroom apartment in Metro Vancouver was $1,415, a two-bedroom at $1,792 and a three-bedroom at $2,026 per month.

A report released last week by the Carnegie Community Action Project said average rents in privately owned and run hotels in the Downtown Eastside were $712 per month –  $49 per month more than last year, and $25 more per month than 2017.

“This average rent would absorb almost an entire social assistance check,” said the report, noting a single person currently receives $760 a month on welfare, or $1,183 a month on disability (not including the temporary COVID-19 top-up).

The city staff report echoed Carroll’s findings about the increase in demand for financial assistance, with the city’s renter enquiry line, renter-serving agencies and legal advocacy nonprofits all seeing an increase in enquiries since the beginning of the pandemic.

“The data indicates that the pandemic has exacerbated pre-existing challenges and inequities facing some Vancouver renters, particularly those with lower incomes and those experiencing intersecting barriers,” said the report, which recommends council approve grants totaling $575,000 to 12 agencies.

The money, the report said, will be used by agencies such as the Tenant Resource and Advisory Centre, or TRAC, to educate renters about their rights, advocate for them “and directly support renters at risk of displacement from their homes and communities.”

City staff recommended TRAC receive a grant of $80,000 to assist with legal representation for renters impacted by the pandemic. 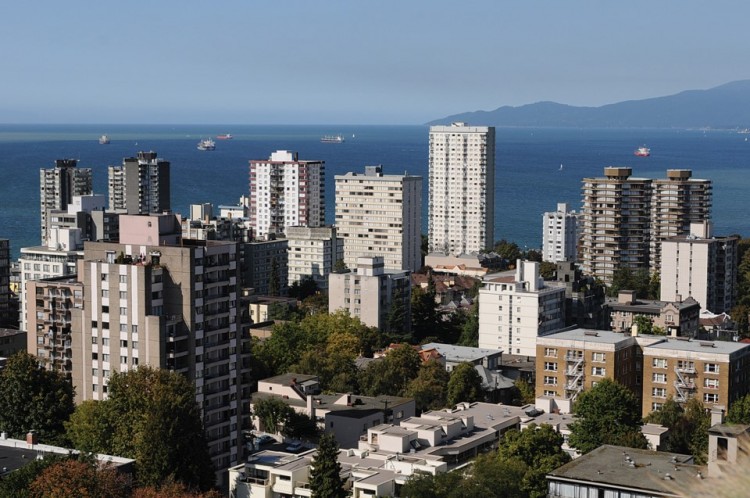 A staff report going before city council next week said the average rent across all unit types in Vancouver was $1,598 per month last year, an increase of two per cent over 2019, despite a higher vacancy rate and province-wide rent freeze. File photo Dan Toulgoet

Lawyer Robert Patterson, a TRAC legal advocate, said the uptick in enquiries from renters has gone from an average of 40 to 50 a day pre-pandemic to 70 a day this week. Concerns about evictions have been identified by many renters.

The B.C. government imposed a temporary eviction ban for non-payment of rent from mid- March 2020 to mid-August 2020. The lifting of the ban in August has left many renters in arrears and unable to pay back their landlords, despite the government’s repayment plan, Patterson said.

“Because there’s no forgiveness of those arrears, they have to pay that back, and if they don’t they can be evicted,” he said, noting the period for renters to pay back rent began October 2020 and ends July 2021.

Patterson argued the condensed time period effectively amounts to a bigger rent payment each month for a tenant, who may still be out of a job, working at a reduced rate or can no longer rely on a roommate or spouse’s income because of job loss.

The continued demand the rent bank is seeing for financial assistance comes as the B.C. government announced this week that it introduced legislation to extend the province’s rent freeze to Dec. 31, 2021.

The legislative changes, if passed, also cap future rent increases to inflation, stop illegal “renovictions” and aim to improve the dispute resolution process for tenants and landlords, according to a news release.

“The changes mean no more tenants will face eviction notices for phoney renovations that were never going to happen,” said Spencer Chandra Herbert, the MLA for Vancouver West-End. “By putting an end to this kind of bullying behaviour, meant to drive out long-term tenants and jack up the rent, we're protecting renters and supporting rental housing providers who do proactive maintenance of their rental homes.”

Patterson described the legislation as “positive changes” for tenants but acknowledged they will not have an impact on anyone who can’t afford to pay next month’s rent.

“There really isn’t anything that is coming in to help renters either get out from under the weight of past rent arrears or to help them financially if they’re struggling to make their rent right now,” he said.

Patterson noted TRAC advocated unsuccessfully to government last year to forgive tenants in arrears while simultaneously providing funding to landlords who could prove they were in financial straits.

The NDP-led government promised in its 2017 election campaign to provide an annual rebate of $400 to each renter household in the province that earned no more than $80,000 per year. That promise was renewed in the party’s 2020 fall campaign, but has yet to be rolled out.

Patterson said the concern of introducing such a policy instrument during pre-COVID-19 times was the $400 would simply go to landlords “and all it might do is sort of buoy up the rents” in the housing market.

“At this point, though, I think because so many renters are in a vulnerable position, some kind of direct financial support to them probably makes a lot more sense now than it did back then,” he said. “Even if it ends up tinkering with the market a little bit, there are so many people in such great need that it would be a good idea.”