Further, documents show, the Baldy Hughes Therapeutic Community (BHTC) was used to funnel contract dollars to party donors for work at the site operated by the B.C. New Hope Recovery Society since 2007.

In one case, that included one society director’s company being allowed to test drive a biothermal heating system before marketing it, a pilot project heavily funded with tax dollars.

Set against the canvass of B.C.’s ongoing opioid crisis, events occured as overdose fatalities climbed – from 202 deaths in 2010 to 1,724 last year.

Victoria has poured almost $10 million into BHTC since 2007. 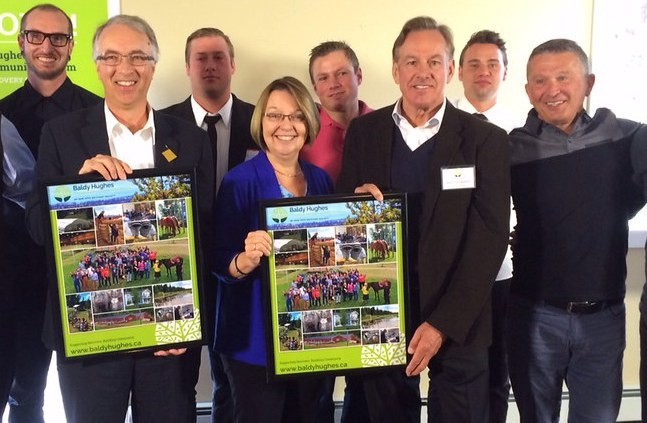 “How can they give all this money to open that business and the rest of us are starving for money?” asked Dr. Sherry Mumford, who spent 15 years in Fraser Health Authority addictions leadership roles. “A lot of it doesn't add up.”

And, she said, “I don’t know anybody who would ever refer a client to Baldy Hughes. Nobody in the business really knows what’s going on up there.”

“We were significantly more cost effective at approximately $40,000 per person,” he said.

Many men credit it with helping them escape the horrors of addiction. While living at BHCT, men receive intensive addictions counseling, health and fitness work, vocational training, agricultural instruction and leadership skills. Some consider BHTC a last-chance rehab for hardcore addicts to get well.

England said community involvement is a large piece of recovery and healing for residents within BHTC’s therapeutic model.
“Since the alleged volunteer experiences to which you refer took place many years ago and are just being reported to us in 2021, we are concerned that we may have been left out of being part of a real-time solution,” England said. “We encourage any past residents with concerns to contact us so that we may address their concerns directly.”

AB said using addicts was “a clear violation of duty of responsibility. Some of them are court-assigned to be there."

Certainly, Smith, himself in addiction recovery for years, was a Falcon supporter.

Two weeks before the vote Feb. 26, 2011, he tweeted, “Northern BC phone banks running like a HOT furnace. @KevinFalcon has the fastest growth by far. #leadbcl.”

"Kevin Falcon visited at one point,” AB said. “He was introduced as the next leader of the party. Right after Kevin Falcon lost, Marshall Smith was taken out of his position."

EF, seeking anonymity due to job loss fears, said addicts told him they were pressed to do the Falcon work.
“They said ‘no.’ Marshall gave them grief,” EF said. “Marshall would explain why Falcon should be the next leader.

“It was a very political environment.”

Mayencourt is unaware of such work. He would have discouraged it.

"That is not ethical.”

However, discussions on political involvement as community service were part of BHTC life during the 2009 provincial election, said recovering addict Mark Harris.

“We were going to be contributing members of society again,” he said.

He said addicts would volunteer their chosen party. Harris did phone solicitation for current interim B.C. Liberal leader and Prince George-Valemount MLA Shirley Bond. “We were given the opportunity to campaign for whatever party we chose.”

Smith said addicts asked to volunteer but didn’t decide where they did so.

“We decided . . . we would have no problem with them spending a little bit of volunteering to see what the process was like and to exercise their instruments of citizenship,” he said.

“Clients were doing so as volunteers in the campaign of MLA Shirley Bond,” Mayencourt said. “Bond was a champion for Baldy Hughes and our clients, and clients wanted to help her be re-elected.”

Smith said inferences addicts were forced or asked to leave if they didn’t participate in political work were “patently outrageous.”

“We were giving back,” said Harris, who worked at a Rona store.

Rona is owned by Lowe’s Canada, which said, “We confirm we did not make charitable donations to that organization.” Art Knapp and Canadian Tire did not respond.

Former society board member Selen Alpay, who gave the Liberals $20,550 between 2016 and 2018, owns the Canadian Tire outlet and didn’t return phone messages left at his store.

Smith said unpaid labour was a practicum or work experience in BHTC’s Building Futures program. He said other therapeutic communities are based on a ‘social enterprise' model where recovering addicts work onsite.

“We didn’t have the resources to do sort of onsite work experience programs,” he said. “A lot of the time, those companies would wind up hiring them when they left treatment.”

“Many of our residents arrive without this experience of community, giving back and understanding that we are all interconnected. As such, we provide elective volunteer experiences,” said England, a heavy Liberal donor. “This piece creates a positive feedback loop of creating skills and high self esteem, which is often residents’ highlight at Baldy Hughes.”

When Premier Gordon Campbell in April 2009 announced $32.6 million to commercialize clean technologies, the deal included $460,635 for a $1,316,100 project to heat BHTC and save heating costs.

Brian Fehr was a 2007-08 board member and would rejoin in July 2011. His BID Group subsidiary DelTech Manufacturing “was commissioned to undertake the design, manufacture and installation of a wood-pellet based centralized heating system,” said a Canadian Biomass magazine article penned by DelTech general manager Fred Spinola.

“First Nations communities . . . are what we see this system being ideal for but we wanted to give it a really good testing first,” Fehr told the Prince George Citizen.

“It is our understanding that this project was done at cost, and hence there were no charitable donations,” England said. “At the time of board approval for this project, Mr. Fehr was not a director of B.C. New Hope Recovery Society and all appropriate governance protocols have been followed. “

Fehr could not be found for comment. Calls to his now-former company were not returned. 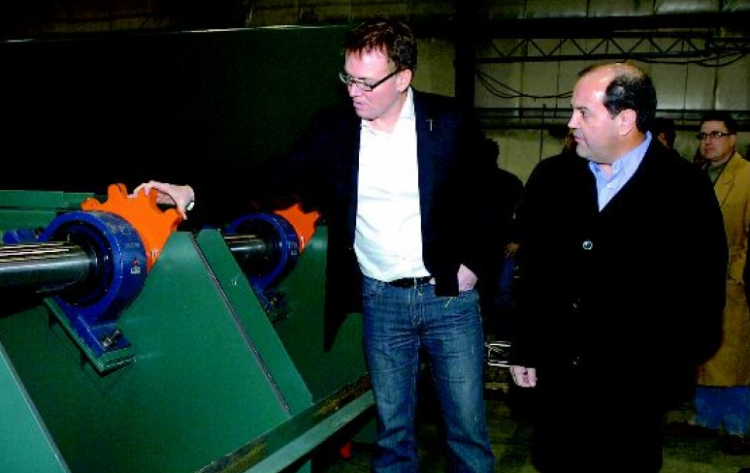 Further, when BC Housing wanted to upgrade BHTC’s electrical infrastructure, the contract went to Prince George’s Centre City Electric in 2014. The company gave the Liberals $1,000 in 2013.

Mayencourt said BC Housing awarded contracts, not the society.

And, said England, “no improper donations were made and certainly not for any improper purpose.”

While doing Legislature work, though, Mayencourt was also working to make BHTC a reality. In May 2008, he told the Legislature he took summer legislative intern Danica Wong to Baldy Hughes.

“Danica came with me up to Baldy Hughes and has stayed in my office and a whole bunch of things,” he told the Legislature May 1, 2008.

The Legislature’s clerk’s office said an intern’s caucus placement provides opportunities to spend several weeks in a constituency office to observe and learn about an MLA’s work in their community.

“Interns are encouraged to visit constituency offices, or projects that are undertaken by MLAs,” Mayencourt said.

Between January 2006 and August 2008, Mayencourt had working with him future Liberal donor Craig Jangula as BHTC “intern executive director” or a “senior consultant,” according to LinkedIn.

Jangula said he was in Mayencourt’s office at the time.

“I would go up (to BHTC) from time to time and help out,” he said. “It was part of my responsibilities as a constituency assistant. I was his staff member and it was something [Mayencourt] was really committed to.”
Mayencourt said Jangula was involved after a BHTC executive director left unexpectedly.

“I had no one else to turn to,” Mayencourt said. “Our executive director had left, we had about a dozen clients onsite. I was at the legislature from Monday to Thursday and would often travel to (Prince George). Craig worked four days per week in the constituency office and was willing to volunteer as a manager in his free time. There were undoubtedly a few occasions when his constituency work overlapped with Baldy Hughes.”

Conflict of Interest Commissioner Ted Hughes said in 1992 there’s nothing wrong with MLAs being involved in outside projects, as long as they don’t further private interests.
Asked if he thinks he was in a conflict, Mayencourt said, “No,” adding he took no money for his efforts.
“I knew that I had to be very, very clean because I was an MLA,” he said. 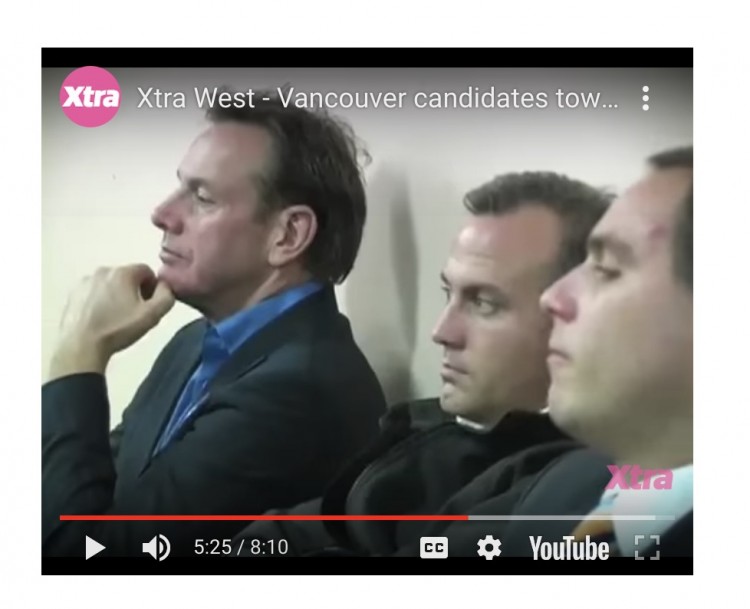 Kevin England (left) and Marshall Smith (centre) attend a Vancouver election meeting where Lorne Mayencourt was speaking as a 2008 Conservative candidate for Parliament in the Vancouver Centre riding | Screenshot via xtra.ca