The COVID-19 pandemic has done significant damage to the bottom line of British Columbia’s largest commercial printers, according to data collected on Business in Vancouver’s Biggest Commercial Printers in Metro Vancouver list (https://biv.com/lists).

With only two exceptions, every printer on the list suffered a decline in revenue. No. 18 Pacific Adverting Printing & Signs was the sole company on the list to post revenue growth last year, increasing 20% to $600,000 from $500,000 in 2019. No. 16 Super Printers maintained its revenue at the same level as that of 2019.

Stable revenue over the past year for a few companies lower on the list helped the median revenue of the top 20 printers to grow 5.8% to $5.5 million in 2020 from $5.2 million in 2019. However, this does not reflect what most commercial printers in B.C. experienced; 89% of the companies on the list recorded a revenue drop.

Average revenue fell 11.9%, to $10.4 million in 2020 from $11.8 million in 2019, suggesting that smaller printers posted smaller revenue declines than did larger printers higher on the list. 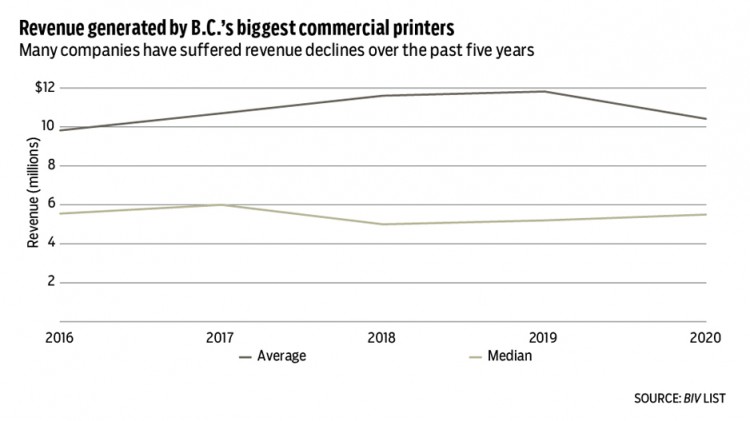 The 2020 pandemic wiped out half a decade of revenue growth for three of the top four largest commercial printers that had five years of data available.

No. 1 Hemlock Group of Companies was the only company to have higher revenue in 2020 than in 2016.