Busiest courses in the province recorded an average growth rate of 14.7% in 2020

With its natural advantage of outdoor green space, golf in British Columbia has thrived through pandemic restrictions that have limited business for so many other sports in the province.

Last year, B.C.’s golf courses recorded the highest growth in at least the past half-decade, according to data collected on Business in Vancouver’s Busiest Public Golf Courses in B.C. list (https://biv.com/lists).

Last year’s improvement was driven mainly by larger courses ranked higher on BIV’s list, which grew at a higher rate than smaller companies lower on the list. 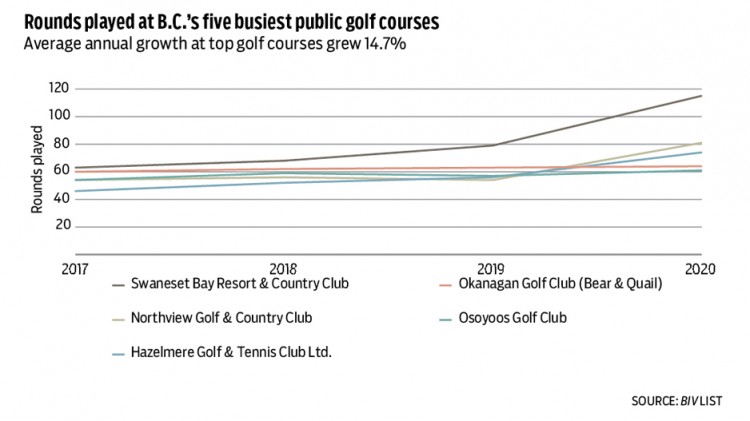 Sandpiper’s growth was such a standout among the 10 lowest-ranked golf courses on the list that, if removed, the average for the remaining nine courses would drop to 5.6% from 13%.

After Sandpiper Resort, the three busiest golf courses on the list had some of the highest one-year growth rates.

No. 1 Swaneset Bay Resort & Country Club and No. 3 Hazelmere Golf & Country Club both recorded double-digit growth at 45.6% and 32.1%, respectively. •