A UBC study using genomic sequencing has found the piscine orthoreovirus has been transmitted from B.C. fish farms to wild Pacific chinook for at least a decade, leading researchers to call for a "precautionary approach" to salmon farming

A debilitating virus widely seen in Atlantic salmon is being transmitted through open-water pens into wild Pacific salmon populations, according to new research out of the University of British Columbia.

The study, which traced the piscine orthoreovirus (PRV) through genome sequencing, found it has been continuously transmitted from open-net salmon farms to wild juvenile chinook salmon for at least a decade — underscoring how aquaculture has become a pathway to introduce novel pathogens to wild species.

The genomic sequencing — a similar process to tracking down SARS-CoV-2 variants — estimated the virus’s introduction into wild chinook salmon took place roughly 30 years ago, the same time Atlantic salmon eggs were brought to the West Coast.

That refutes claims that the virus was introduced during earlier attempts at farming Atlantic salmon in B.C. dating back to the later part of the 1800s.

“The really important thing is that when we sampled wild fish closer to the farms, they were more likely to be infected,” said Dr. Gideon Mordecai, post-doctoral fellow and viral ecologist from UBC’s department of medicine.

A lazy fish is a dead fish

One of the most common viruses seen in European and North American penned fish, PRV is known to lead to heart disease. But in chinook salmon, which have not had the same time to adapt to the virus, it leads to a disease called jaundice anemia, where red blood cells burst, leading to kidney and liver damage.

PRV poses little risk to human health. In Atlantic-farmed salmon, Mordecai said nearly all penned fish become infected by the end of their lifecycle, leading to lethargic swimming and anorexia.

Just how deadly PRV is to wild Pacific salmon species is hard to measure, but legions have been observed in juvenile fish, and in extreme cases, a fish can go yellow with jaundice. Researchers worry the virus will impact their ability to feed, make them less likely to evade predators or prevent them from swimming upriver to spawn.

As Mordecai put it, “You get lazy fish.”

“The disease from this virus isn’t the most lethal. In a way, that’s what makes it more problematic,” he said, pointing to its ability to spread more widely instead of being contained to a small circle of doomed fish. “It’s a bit like the difference between Ebola and COVID.”

He added: “Salmon are a foundation species. They provide the food to the bears, the killer whales, but also people.” 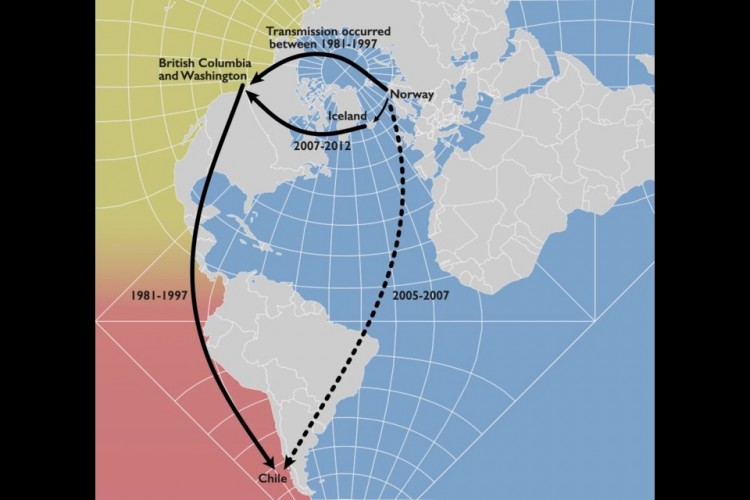 “This study’s genome sequencing clearly indicates PRV is not native to B.C. waters — it originated in the Atlantic Ocean and has been spread around the world through salmon aquaculture.”

At the moment, the Department of Fisheries and Oceans (DFO) doesn’t classify PRV as a disease agent. Because the Fisheries Act doesn’t allow industry to introduce disease into an open-water pen, Mordecai said “It makes it legal almost through a loophole.”

“My role is to provide the evidence,” he said. “It shows these salmon farms do pose a risk.”

That message was recently echoed by veteran DFO scientist Dr. Kristi Miller-Saunders, who told the Standing Committee on Fisheries and Oceans last month how she was unable to publish research showing activity of the virus on a fish farm because two industry vets “were not happy with the finding and did not want the finding to be included in the paper.”

When asked whether DFO's independence from industry has changed in the intervening years, Miller-Saunders was blunt: “Well, I am supposed to be sticking to the science, but in short, no.”

Mordecai, for his part, said that while the UBC research team limited their study to chinook, PRV has been found in all five wild Pacific salmon species.

Further research over the coming year will be looking into just how deadly the virus is in the wild.