Latest funding round follows US$17m Series A in March

Success is breeding success for Dooly Research Ltd., with the Vancouver startup announcing Thursday the close of an US$80-million Series B funding round.

The company, best known for its sales management tool, most recently closed a US$17-million Series A round back in March.

At that time, CEO Kris Hartvigsen said his goal was to grow his 22-person team to 50 workers by the end of the year.

With the close of the Series B, Hartvigsen said he now aims to have a 100-120-person roster locked in by the close of 2021 as the company doubles down on developing its product.

“The attention that we got from the Series A just catalyzed another level of growth within the business that was partly anticipated but certainly not to the degree that it is,” he told BIV, adding the shift to remote-working has been the primary driver behind Dooly’s success since launching last September.

His Vancouver-based firm specializes in doing away with administrative grunt work and redundant tasks sales teams deal with through a platform that connects to other tools such as Salesforce, Slack and G-Suite.

“There's not a CEO out there that wants to push a broom, there's not a salesperson that wants to clean a toilet and we want to be able to get rid of all of the things that feel like they shouldn't be in your daily job description,” Hartvigsen said.

“I always joke we’re just 1% done what we're building. And so the funding is really being applied to accelerate that roadmap and reel in what we might have done a year, two years out. We're going to be able to do that a lot sooner with a far bigger team.”

The CEO said he’s in the midst of building a remote-first workforce with Vancouver serving as a “mothership” for the global team. 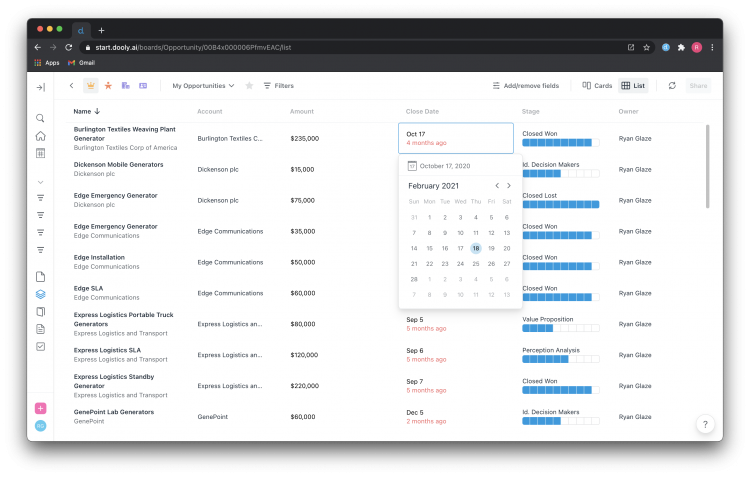 
“There will be a desk for every person in Vancouver that wants a desk. And even if that's part time, we believe that there is a balance that needs to be struck,” Hartvigsen said.

Most hiring will be focused on engineering design, product leadership and product management as Dooly expands its current 40-person workforce.

Spark Capital general partner Will Reed joins Dooly’s board as a result of the raise.

Hartvigsen said the company is not sharing numbers on a valuation at this time.