By Jock Finlayson, David Williams | May 27, 2021
tiger_barb/iStock/Getty Images Plus

The government has not tabled a budget in more than two years, so the document provides much-needed details on its finances and fiscal plan. Commendably, it offers an array of supports for Canadians through the pandemic and its immediate aftermath.

What the budget does not do is identify the strengths and weaknesses of Canada’s economic position going into and exiting from the pandemic. For example, it has very little to say about the challenges posed by years of sluggish business investment and feeble labour productivity growth. The budget fails to acknowledge that Canada has steadily lost global market share across virtually all categories of traded goods and services. And it is silent on another important topic that bears on Canada’s medium-term prospects: the pervasive build-up of debt.

Canadians, collectively, were heavy borrowers before the pandemic. At the end of 2019, Canada was the world’s seventh most indebted jurisdiction, with relatively high levels of gross debt to GDP across the household, corporate and government sectors (see table). This mounting debt seemingly did nothing to make Canada a more productive country, because there was virtually no growth in GDP per capita during the five years ending in 2019.

Amid the pandemic, debt jumped across all sectors. By the third quarter of 2020, Canada had become the world’s sixth most indebted jurisdiction, with economy-wide gross debt of over 3.5 times GDP. Notably, despite serially weak business investment, corporate debt is larger as a share of GDP than household or public sector debt. This paradox suggests Canada is an attractive place for many businesses to borrow but a less-alluring one in which to invest. 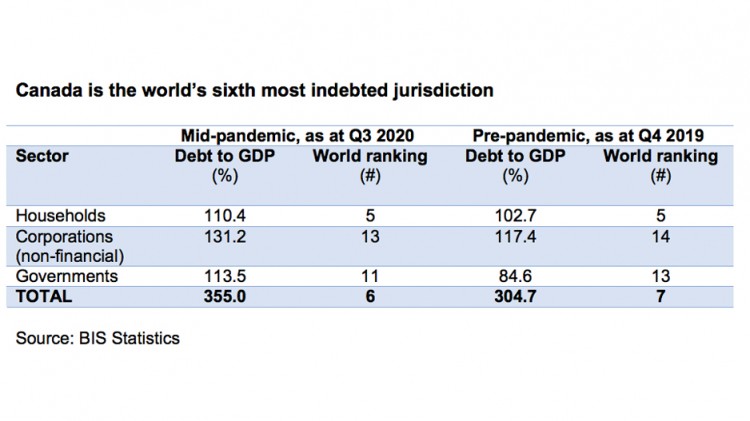 We believe Canada needs policies that will drive productivity-driven economic growth. Only sustained increases in productivity can generate the extra income needed to withstand future shocks, reduce indebtedness, cover the health care and pension costs of an aging population and fund desired improvements to the social safety net.

Instead, the federal government’s economic growth strategy is centred on turbocharged immigration targets and a national child-care program. Higher immigration increases the labour supply, but it has negligible impact on GDP per capita and the country’s age structure over time. It also seems oddly timed after the pandemic’s negative impact on labour demand. The federal budget estimates that a national child-care program, if fully implemented, could raise Canada’s GDP by 0.05% per annum over the next two decades. (The economic lift is small partly because labour force participation rates among female and male prime age workers are already high.) Neither policy is likely to do much to strengthen Canada’s ability to shoulder its growing debt burden or weather future economic storms.

Higher productivity growth is the preferred way to raise living standards because it is the only sure path to increase GDP per person as well as average incomes. Making the workforce more productive calls for a hard-headed assessment of the incentives – and disincentives – facing private-sector investment in capital, technology, innovation, skills and scale. Rather than more workers, what the country urgently needs is more investment per worker. A recent C.D. Howe Institute analysis shows how Canada has fallen far behind other advanced economies in rates of capital investment per worker, so much so that the per-employee capital stock has been shrinking.

The latest federal budget wagers that either borrowing costs will stay ultra-low indefinitely or that an extended period of faster productivity growth lies ahead – even though boosting productivity is not a priority for Ottawa policymakers. This strikes us as a high stakes gamble with Canada’s future. •

Jock Finlayson is the Business Council of British Columbia’s senior policy adviser; David Williams is the council’s vice-president of policy.